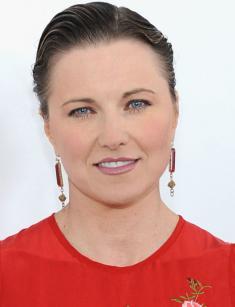 Lucy Lawless is a New Zealand actress who earned her fame for the lead role in the adventure series Xena: Warrior Princess as well as the movies Euro Trip, Boogeyman, and the series Battlestar Galactica and Spartacus. Besides, the woman is known as a Broadway musical singer, photo model, and the winner of the 1989 Mrs. New Zealand competition.

Lucille Frances Ryan was born on March 29, 1968, in the suburban area of Auckland, Mount Albert. She was one of the six children in the family of the town mayor and banker Frank Ryan and the school teacher Julie Ryan. Lucy has four elder brothers and a younger sister.

Before the girl went to school, she was a tomboy; she was as good as her brothers in games. Perhaps, the parents took their daughter to a convent school to tame Lucy’s nature. Nuns managed to instill the love of the English literature in her; besides, the would-be star started performing at school musicals thanks to her vocal talents when she was little.

At the age of 17, the young woman entered the philological faculty of the University of Auckland and continued to develop her singing. The next year, however, she dropped and began to travel around the world with her boyfriend. The couple took odd jobs to earn their living: harvesting grapes on a farm, working in a mine, drawing mine maps, and so on.

Lucy came back home as a married woman. In 1989, the victory in the Mrs. New Zealand competition became the first step to fame. Lawless was only 21, and modeling agencies were offering her photo sessions. Following TV commercials, the beauty appeared on television soon.

Lucy Lawless debuted in the New Zealand comedy show Funny Business; further on, she worked on a travel program on Air New Zealand Holiday. As a popular movie actress, Lucy did not quit television. In 2003, she presented a documentary series Warrior Women on Discovery channel. Each episode told the story of a female warrior who actually existed; their out-of-battle lives were the main focus.

In addition, Lucy Lawless hosted New Zealand music awards ceremonies and participated in the popular American show Celebrity Duets; she won the second place there. The artist gave solo concerts in Roxy, New York, and Chicago; she performed many new songs and tried herself in the R&B genre. Broadway lovers fancied her role of Betty Rizzo in Grease.

The actress debuted in cinematography in 1990. Initially, her roles were small: a nurse in the drama A Bitter Song and a player’s girlfriend in the sports melodrama The End of the Golden Weather. Later on, Lucy joined the cast of the adventure fantasy Hercules and the Amazon Women. The pilot brought the role of the villain Lysia; then, she personified a Centaurus’s friend. Suddenly, Vanessa Angel who played in the series got sick, and Lawless replaced her as the warrior woman.

It took the artist only three episodes of Hercules: The Legendary Journeys to conquer the hearts of the audience. Producers immediately found the opportunity to launch the sideline project, Xena: Warrior Princess; it was popular all over the world. The actress continued to work on Hercules for three years.

Lucy did not use any backup assistance in her most popular project, Xena: Warrior Princess, and performed all the tricks on her own. To provide safety, scene designers covered the movie set with gym mats and decorated them with grass and dirt. The actress no injury throughout six years of filming. However, The Tonight Show with Jay Leno was challenging: Lucy was going to ride a horse in the studio, but the animal freaked out, stumbled, and fell off the stage with the rider. Lucy had severe thigh trauma; the recovery took almost a year.

The 21st century brought many exciting offers, but the actress decided to work on episodes of top-grossing projects. Her choice was ideological: according to Lucy Lawless, a short appearance required more concentration and more skills. The artist appeared in an episode of The X-Files and personified a punk girl in the blockbuster Spider-Man. Besides, she played an Amsterdam mistress in the youth comedy Euro Trip and the main character’s mother in the horror Boogeyman.

Later, Lucy accepted the offers related to lead roles: the TV movie Locusts and the horror Vampire Bats. The adventure action series Spartacus was a great success. Lawless played Lucretia in the first season, Spartacus: Blood and Sand, and the prequel Spartacus: Gods of the Arena.

Today, the artist is actively engaged in movies and series. She played Diane Lewis in the pseudo-documentary comedy Parks and Recreation and appeared in the superhero series Agents of S.H.I.E.L.D. In the historical drama Salem, the woman played Countess Marburg.

The recent years were marked with the black comedy series Ash vs. Evil Dead. Lucy played one of the main characters, Ruby Knowby, and collaborated with Bruce Campbell, Jill Marie Jones, and Ray Santiago.

Lucille met her future husband, Garth Lawless, when she was a school student. They traveled around the world and married in 1988. Later on, the couple settled in Kalgoorlie, Australia. When the woman got pregnant, the family returned to Auckland. The daughter Daisy was born in New Zealand.

The actress’s first marriage lasted until 1996. Lucy worked a lot and spent little time home; the family relationship deteriorated. Two years later, the artist married again: she met one of the executive producers Robert Tapert at the movie set of Xena: Warrior Princess and started dating him.

The wedding took place on March 28, 1998. A year and a half later, Lucy gave birth to the son Julius Robert Bay. Three years later, his brother, Judah Miro, was born.

Lucy Lawless is a Greenpeace activist. In 2012, the actress and six other members of the organization took an oil-mining ship near New Zealand; it was to dig wells in Alaska. Lawless and her teammates controlled the vessel for more than three days and demanded to leave the sea until the police arrested the activists and gave them 120 hours of community service.