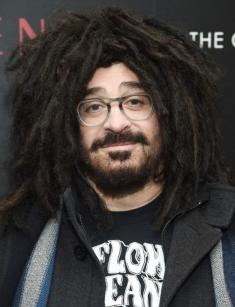 The Maryland native, Adam Duritz received wide acclaim in 1991 as a musician and one of the founders of the rock band Counting Crows. Apart from playing keyboards and performing lead vocals, Adam did solo projects and collaborated with famous musicians. Also, he opened two record labels and wrote original music specifically to accompany a movie for the actors. Also, he's a star of Adult Contemporary radio. Adam has never been married and doesn’t have children. His net worth is roughly estimated at $40 million, mostly earned through a successful career in the music industry.

Originally Adam held the American nationality, although he is of Russian Jewish descent. The birthplace of Adam was Baltimore. He was born there to his parents, Jewish doctors, on August 1, 1964. Adam grew up in different cities. He attended high school in Watertown and graduated from Oakland’s high school.

Most of his childhood, Adam spent in Oakland. The family moved there from Texas. Adam was a sports fan from an early age. As a kid, he was a Celtics fan because he lived in Boston for a bit, but once he got to Oakland, he fell in love with the Golden State Warriors. It was a very cool time to be a kid in Oakland. In 1975 the Warriors won NBA championship. The A’s were in the middle of winning three World Series in a row, and the Raiders were amazing. In 1976 the Raiders won the Super Bowl. It was just awesome for Adam to live there during that time.

In addition to the interest of the sport, Adam’s peculiar hairstyle, which has been a special feature of his image, also came from his young ages. The long dreadlocks were not his actual hair. Adam’s father went bald and wore a wig with dreadlocks. Once he gave it to Adam, who subsequently made the wig an integral part of the image.

Duritz started his music career in San Francisco, singing and writing songs for local bands. His songs were spread on college campus radio. In 1990 he met his future bandmates and participated in writing music for them. The same year Duritz joined The Himalayans, but left the band in 1991, when he and David Bryson united to create demo-tape for a record label.

Their work got recognition, and was the beginning of their debut album “August and Everything After”. It was released in 1993 by new formed group Counting Crows. The album had a success. It picked at top 5 of the main US chart. The group received two Grammy Awards’ nominations in 1994, while the album became platinum.

In 1997Adam Duritz became the co-owner of a record label E Pluribus Unum, later bought out by Geffen Records. In 2007 Adam set up a new label, Tyrannosaurus Records, also known as T-Recs. The first two signings were Brooklyn hip-hop outfit Notar and Chicago rock band Blacktop Mourning, who Duritz accidentally discovered via their MySpace music sites. He had no intention of setting up a second label until he heard those artists’ tracks online. Then he intended to remove the red-tape associated with normal record companies.

Apart from being a successful musician, in 1997, Adam decided to try himself as an executive producer. His first project was The Locusts. His second project, Freeloaders (2011), became an example of lazy filmmaking. Attempts to stretch into outrageous comedy and to add romance and character development felt forced and desperate.

It felt as if the movie didn't dare to choose one way or the other. It could have been entirely outrageous or dialed back and much sweeter, but instead, it tried to please a wide range of viewers and ended up pleasing no one.

The movie’s plot told about a group of freeloaders, Dave (Josh Lawson), Emma (Zoe Boyle), Benny (Kevin Sussman), Fritz (Nat Faxton), Trane (Warren Hutchinson), and Vic (Clifton Collins Jr.), who have been crashing at a mansion owned by Adam Duritz for years. When Adam announces that he's getting married and selling the mansion, the freeloaders must either find new places to live or raise a pile of cash to buy the mansion themselves.

Despite having an extensive list of girlfriends in the past, Adam is not married and doesn’t have children. He started his love affairs from having a fling with Winona Ryder in 1994. Later he wrote the song "Mrs. Potter's Lullaby" for Monica Potter. Once he dated Lara Flynn Boyle.

In 1995, Duritz briefly dated Jennifer Aniston. They were spotted quite a few times as the actress had just begun drawing media attention due to her stint in Friends as Rachel Green. However, reports suggested that the relationship ended even before it took flight. Two years later, Adam was dating another Friends' star and close friend of Jennifer, Courteney Cox.

Over the years, Adam had relationships with Whitney Casey, Trishelle Cannatella, Samantha Mathis, Christina Applegate, and Mary-Louise Parker. In 2009 – 2010 he dated Emmy Rossum. The pair originally met through Twitter. Once, Emmy said that she got why chicks dug Adam. She said that he was extremely kind, incredibly intelligent, thoughtful, creative, and respectful.

In 2008 Adam Duritz suffered from Depersonalization Disorder, which made the mind feel disengaged from the body and one's surroundings, for periods lasting from minutes to months. Then he said it doomed all his relationships and has left him a lonely man in his 50th year.

"It's like the world doesn't seem very real, I don't know," Duritz said. "I really hoped it would go away, or that I would find the right medication, so it didn't affect me anymore, or that I would just go to therapy and could think my way around it. But none of that has happened."

“In the past, whenever anything went wrong in a relationship, I could always write a song about it, and that made it OK. I could go another year, make another record, do another tour. I regret not having had the relationship that would have led to marriage and kids – so now I’m wondering, will I ever have children?”

Adam is one of a lot of fans, who signed up for NBA League Pass just to be able to witness their exciting brand of basketball on a nightly basis. Thanks to League Pass, he has frequently been watching his favorite Warriors’ games. Like a true fan, he even sometimes posted from the Counting Crows’ Twitter and Instagram accounts while watching.

In 2017, the Warriors celebrated their championship. The entire team headed to Harlot Nightclub in San Francisco, where the Warriors partied the night away with Bay Area legends Too Short and E-40. After the Warriors game, Adam Duritz visited the party too.