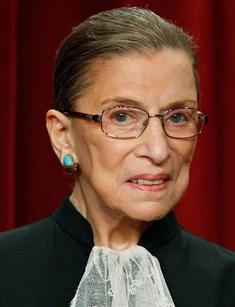 She is a prominent jurist. During her long-lasted career, she stood for gender equality and saving constitutional privacy. As a legislator on behalf of women’s rights, she made a splendid career and had a flawless reputation. Moreover, she became a pop culture icon.

Ruth was the second child who was given the nickname “Kiki.” When her mother found that there were several girls named Joan in her daughter’s class, she decided to call her Ruth. Her education included school education and attendance at the center for Jewish. Besides, her mother took her to the library. She was good at school; after graduating, she entered high school. Her mother dreamt that Ruth would be a teacher of history.

In 1954 she graduated from the university with a bachelor’s degree in arts. She had excellent knowledge of her subject – administration. Ruth was the highest-ranking student in her class. She didn’t stop learning and entered the law school, where she was one female student to 500 men. Her ethnicity is Jewish.

At the beginning of her career, Ruth met the hardships of finding a job due to gender issues. Even at the law school, she was asked why she placed the man’s position. Despite her strong recommendation, she was denied on some clerk’s vacancies.

Her law professor, a prominent person, helped her to take the position of the clerk for a judge. The professor threatened the judge that he wouldn’t ever recommend another student for him. As a result, Ruth finally found the job in 1961.

She also worked as a research associate. She conducted extensive researches and wrote her book. She learned Swedish and spent in Sweden some period working as a co-author of a book about civil procedures. Ruth had gained positive experience in this country, becoming the witness of changing in the Swedish culture concerning the question of gender equality.

In 1970 she formed the first journal focusing on women’s rights. Ruth devoted her time writing the other book, talking about sex discrimination. In 1972 she also founded the Women’s Rights Project and worked as a project’s general counsel. For three years, she argued six cases about sex discrimination and won five of them. Ruth established herself as a skilled advocate, and her work expanded to many areas of law. He became a real legislator on behalf of women’s rights.

In 1980 she became a judge on the D.C. Circuit. This position was vacant after the death of the former Judge, Harold Leventhal. During her service, she established herself as an efficient judge who was able to find consensus with her colleagues, presenting different parties. Thanks to her work, she earned the reputation of a moderator and cautious jurist. As a result, she gained a significant promotion.

In 1993 Ruth was chosen on the vacant seat of Justice again after the retirement of Byron White. Having been Jewish, she helped the president to add diversity to the court. She was estimated as a well-qualified.

During her testimony as part of the confirmation hearing, Ruth refused to answer several difficult and controversial questions. However, she commented on her vision of the problem of gender equality and the constitutional right to privacy.

She met her husband in her student’s time. The couple remained together and born the child, a daughter in 1955. Her husband, Martin Ginsburg, was a professor. He died in 2010 from metastatic cancer.

Ruth met hardships concerning her health. In 1999 she was diagnosed with colon cancer. Ruth had surgery and chemotherapy and radiation therapy. During her treatment, she didn’t stop working. After her treatment, she trained in the gym as she was physically weakened. As a result of hard work, the judge could may 80 push-ups before her 80th anniversary. In 2019 she had to pass the radiation treatment again.

In 2009 she was included in the list of 100 Most Powerful Women; moreover, she was included in the prestigious lists of various journals as Glamour, Time, and so on. In 2002 she was inducted into the National Women’s Hall of Fame. In 2019 she received the Berggruen Prize for Philosophy and Culture for $1million. In pop culture, she was called the icon. Her appeal has inspired Halloween costumes, nail art, a bobblehead doll, tattoos. She was mentioned in the number of movies and T.V. shows, Deadpool, On the Basis of Sex, New Girl among them.