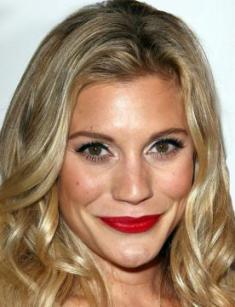 Katee Sackhoff is a talented American actress and producer who became famous for the iconic fantastic series Battlestar Galactica.

The future actress was born in Portland and spent her childhood in St. Helens, Oregon. The girl’s mother worked as a language course coordinator, and the father was a land developer. Katee has an elder brother, Erick.

Sackhoff liked sports: she was engaged in swimming and ballet dances. Unfortunately, she had a knee injury and could no longer continue. Cheerful Katee did not get upset for long and took up yoga and acting. This choice determined the young woman’s life.

The artist debuted on the stage at school: she had roles in Bye, Bye Birdie, Oliver!, and Fiddler on the Roof. The audience’s attention and appreciation inspired Katee so much that she decided to devote her life to the stage. In 1998, she graduated from school and enrolled at a college; she also worked part-time as a waitress. Soon, the beauty got sick of that life and went to Hollywood: she genuinely believed she deserved more.

The next year was marked with the golden opportunity: the woman gained the role of Kara Thrace in the fantastic series Battlestar Galactica. People all over the world watched the adventures of the courageous crew; the actors even signed a document that prohibited them from disclosing the series plot twists.

Sackhoff collaborated with Edward James Olmos, Mary McDonnell, Jamie Bamber, James Callis, Grace Park, and Tricia Helfer. The project not only gave the actress many fans and fame but also brought her the Saturn Award for Best Supporting Actress in a Television Series. It was a triumph: Katee’s pictures appeared on magazine covers and posters.

In 2006, Sackhoff received a part in White Noise: The Light; she appeared in The Last Sentinel and How I Married My High School Crush as well. In 2007, the audience saw Katee in Bionic Woman; she personified the evil cyborg woman. Although it was a secondary role, the actress’s talent sparkled, and her character was impossible to forget. Unfortunately, the project was not much popular among critics and the audience.

In 2010, the artist was invited to the crime detective series CSI: Crime Scene Investigation and two episodes of iconic The Big Bang Theory. In addition, Katee played Dana Walsh in the series 24: her character was an analyst fighting against terrorism

In 2013, the detective thriller with the intriguing title Sexy Evil Genius was premiered; Sackhoff had one of the major parts. She also pleased her fans with the action Riddick starring Vin Diesel, the horror Oculus, and the detective drama Tell.

Katee Sackhoff keeps her private life secret, and only a few facts are known. In 2014, she dated the actor Karl Urban (The Chronicles of Riddick, The Bourne Supremacy, Dredd). Fans can only guesstimate whether their favorite is dating someone now.

Katee has three tattoos. One of them is the Chinese hieroglyph meaning “choice” on the back of her neck, and another one is located on her left shoulder: a cross.

When the series Battlestar Galactica was filmed, the symbol had to be hidden: there was no Christianity in that universe. The third tattoo, the words “bona fiscalia” (“public property”) did not give any trouble: it was on Katee’s right forearm.

Today, the actress continues to work on new projects. She has overcome a terrible disease: in 2009, she felt sick on the movie set. Doctors diagnosed her with thyroid cancer. Fortunately, the surgery and further therapy brought a full recovery; Katee has to visit an oncologist every year for a routine examination.

The actress’s recent projects include the series The Flash and 2036 Origin Unknown. Soon, the audience will see her in the sci-fi series Another Life.

The woman likes to spend her free time with close people and two dogs. She practices yoga and believes that regular exercises can bring harmony and perfect body shape.