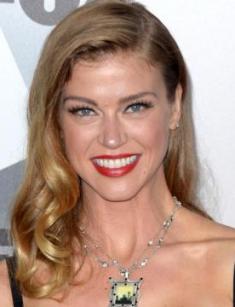 American actress Adrianne Palicki became famous for her role in the TV series Friday Night Lights, as well as the appearance in the TV shows Smallville and Supernatural. The actress coped well with these tasks, winning the love of viewers who began to admire her work.

Adrianne was born in the spring of 1983 in Toledo, Ohio, USA. Her father, Jeffrey, has Polish and Hungarian ancestry, and mother Nancy is of English and German descent. Since childhood, the future actress has developed a warm relationship with her parents, which is evidenced by the tattoo on her hand that depicts their names.

She grew up with her brother and was a happy child. When Adrianne grew up, she said in an interview that she admired the comics that her brother created, and even dreamed of playing in a film based on his work.

From early childhood, Palicki showed excellent acting skills; the girl was friendly and easygoing. She also played basketball and even took part in a local beauty pageant, receiving the title of vice-miss. Although she did not pursue a modeling career, it gave Adrianne a confidence boost and allowed to develop other activities.

In 2001, Palicki graduated from high school. Then she moved to Los Angeles. Initially, she wanted to pursue modeling or acting career there.

However, the girl had to find a job at a cafe and cook sandwiches to earn money to live in the largest city in California. Since she could not immediately realize her plans, Adrianne even began to think about returning to her hometown. But at the same time, she did not give up and attended auditions for TV series and movies.

Palicki’s perseverance and dedication paid off, and she got a role in The WB pilot Aquaman. Her efforts were appreciated, and Palicki later joined the main cast. However, the series was not released due to the conflict of channel management. The girl was not upset because she gained the necessary experience and became more confident.

In 2003, Palicki played the first prominent role in the film Getting Rachel Back, and later she appeared in the film Rewrite. Although she also gained experience, these films did not make her famous.

In 2004, viewers saw Palicki in the episodes of the TV series CSI: Crime Scene Investigation, Quintuplets, and Smallville. In the last TV show, the young woman played for a long time, which brought her success and made Adrianne a professional actress. So, her filmography included new movies, in which she starred with great pleasure and always looked forward to the release of the projects.

Palicki appeared as charming Jessica Moore in the TV series Supernatural from 2005 to 2009. During this period, Adrianne also played Whitney Addison in the movie Popstar, the film Seven Mummies, and the series South Beach. The last project was not a success, and the shooting ended after the release of the first season.

In the summer of 2006, The WB pilot Aquaman, shot several years earlier, was released and saw record levels of downloads on American websites. Although the creators did not make sequels, viewers appreciated it.

The actress could consolidate the success starring in the film Women in Trouble, Legion, and Elektra Luxx. The celebrity played in several TV shows for many years. For example, the American parody animated series Robot Chicken aired from 2007 to 2016. The woman voiced several characters in it.

The project Friday Night Lights aired from 2006 to 2011 and was popular with young people. Adrianne became a real star. Palicki’s following successful projects were the films G.I. Joe: Retaliation (2013), John Wick (2014), and the TV series The Orville (2017).

Adrianne Palicki tries to hide the details of her personal life. However, in 2013, the news media reported about the relationship between the actress and American D.J. Cotrona. He is also an actor whose real name is Donald Joseph.

Their relationship did not last long. In 2014, people became aware of Palicki’s love affair with stuntman Jackson Spidell. The couple soon announced the engagement, but one year later, the lovers ended the relationship. It is not known whether the celebrity is dating anyone or not; Adrianne prefers not to disclose this information.

Despite the busy schedule, Palicki tries to keep fit; the woman is 5.90 ft. (180 cm) tall, weighing 132.27 lbs. (60 kg). In 2007 and 2012, the actress even posed for Maxim. Although models usually wear lingerie for such photoshoots, Adrianne appeared in a bikini and looked very sexy in the pictures.

The actress continues to film. She has participated in the shooting of the second season of the series The Orville which is scheduled to premiere on December 30, 2018.

Palicki communicates with fans on Instagram and Twitter. The woman often posts movie set pictures, as well as personal photos.

Adrianne Palicki has a net worth of $4 million.