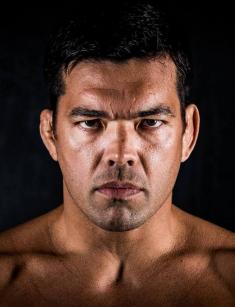 Lyoto Machida is a mixed martial artist who is known for his thorough preparation for every fight. Despite some failures, the man continues to compete in the ring and gain new victories. He does not run for fame and money, though: family and children’s respect are much more essential for him.

Lyoto Machida was born on May 30, 1978, in Salvador, Brazil. The boy got familiar with martial arts early. His father, Yoshizo, headed the Brazilian branch of the Japan Karate Association, Shotokan karate, and the mother, Ana Claudia, brought up the kids: Lyoto and his four brothers.

Machida took up karate at the age of three and got a black belt at 13; he also went for sumo at 12 and Brazilian jiu-jitsu at 15. Further on, Lyoto won several amateurish karate contests. In 2000, the young man participated in Brazilian Sumo Championships, the 115 kg division.

Lyoto’s professional MMA career began when he met the athlete Antonio Inoki. On May 2, 2003, Machida faced Kengo Watanabe and won. The second rival was Stephan Bonnar whom Lyoto defeated with a technical knockdown. The next fights in Japan were also successful, and the sportsman accumulated more experience.

In 2007, the man signed a contract with UFC and debuted in the UFC 67 category tournament. Machida defeated Sam Hoger and other five opponents; besides, he received a Knockout of the Night for the match with Thiago Silva. Following the triumph series, Lyoto competed for the UFC 98 champion title in 2009 and knocked out the American sportsman Rashad Evans in the second round.

Maurício Rua became Lyoto’s next rival. While Machida defended his title in 2009, he had a technical knockout at the UFC 113 rematch in May 2010. The same year, in November, Lyoto lost to the American sportsman Quinton Jackson. The jury’s decision was split; fans were convinced that Machida won.

2011 was marked with Lyoto’s come-back to the ring and the participation at UFC 129. He met Randy Couture and defeated him with a knockdown. It was a spectacular victory; MMA highlights still use it. Thanks to this advantage, Machida had the opportunity to fight against Jon Jones for the title, yet Jones won by a standing guillotine choke in the second round.

August 2012 brought the exciting match between Lyoto Machida and Ryan Bader; the former knocked out his opponent in the first round. The next year, the athlete fought Mark Muñoz and crushed him. In February 2014, Lyoto faced the Dutch Gegard Mousasi. The jury gave the victory to Machida; it was the Fight of the Night.

2014 and 2015 were pretty harsh for Machida. Following the jury’s decision, he yielded the palm to Chris Weidman at UFC 175, middleweight category. In December 2014, the man won an early victory over C.B. Dollaway and got the Performance of the Night. April and June 2015 brought the losses to Luke Rockhold and Yoel Romero.

On April 16, 2016, Machida was supposed to fight Dan Henderson. However, the event was not held: Lyoto was accused of doping and deprived of the right to participate in tournaments for a year.

In 2018, Machida had three matches: Eryk Anders (February), Vitor Belfort (May), and Rafael Carvalho (December). All these fights were successful for Machida; he entered the new 2019 year as a champion.

The Japanese athlete has a unique fighting style: he uses elements of Shotokan karate, Brazilian jiu-jitsu, wrestling, and sumo. According to the fighter, this style helps him adapt to any situation during a fight. Some people accuse Lyoto of having boring fights and emphasize that the jury often gives Machida victories. However, the man does not care what others say; he just wants to gain new victories.

The sportsman works hard to achieve his goals. Unlike scandalous Conor McGregor, Machida takes every match seriously and reviews all possibilities; he explores all scenarios. As a result, the athlete’s record is successful.

Machida’s behavior is weird sometimes, and people actively discuss it. Each morning, the man drinks his own urine: he picked this habit from his father, as the family believed it was a part of the traditional medicine. Other athletes wrote many posts on the Internet and uploaded videos and photos where they were drinking urine, too. Some users made comments like “the champions’ drink”.

Lyoto Machida does not keep his personal life secret. When the sportsman was a middle-school student, he met his future wife, Fabyola. In September 2008, the couple’s son, Taiyo, was born; his name means “sun”. In 2010, Lyoto and Fabyola welcomed their second son, Kaito.

Lyoto is a loving husband and father; family comes first for him. The man tries to set a good example for his children and does everything he can to earn their respect.

Nowadays, Machida is not going to finish his career: he works hard in a gym every day and prepares for new matches. However, the athlete’s next fight date or opponent remains unknown.

The athlete posts personal pictures and photos with his children on Instagram. Besides, there are many pre-match photos there.