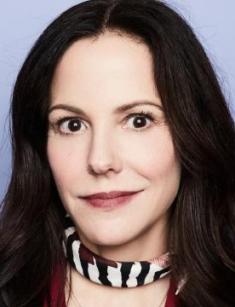 Until the mid-2000s, the biography of the American woman named Mary-Louise Parker was associated only with acting in the theater, movies and television shows. Successful roles in Broadway productions, as well as brilliant acting in the series, brought the woman prestigious nominations and Tony and Emmy awards. After her most successful work in feature films, Mary-Louise tried her hand as a writer and published a memoir entitled Dear Mr. You and a number of articles for Esquire magazine.

Mary-Louise Parker was born on August 2, 1964, in the capital of the American state of South Carolina. The youngest of four children, she is the daughter of Caroline Louise (née Morell) and John Morgan Parker. She has Swedish, British, German and Dutch roots.

According to the actress, as a child, she was a lonely and profoundly miserable one, because the parents, who provided her with everything she needed, always moved because of the father’s job. For ten years the family of the US Army judge visited Tennessee, Texas, Thailand, France, and Germany and eventually stayed in Arizona, where Mary-Louise received her education in the secondary school of Marcos de Niza High School.

Later, Parker studied at the University of North Carolina School of the Arts, majoring drama. She graduated in 1986 and then left her parents and moved to New York. In the metropolis, she joined the Danish shoe company ECCO, and in her spare time, she attended auditions and played minor roles in TV shows and movies. The first creative victory in Parker's career was a performance in the Broadway play Prelude to a Kiss, which received the theater award Tony in 1990.

Hollywood directors immediately noticed the dramatic talent of the actress and appreciated her attractive appearance and elegant figure (with her height of 5’8’’ (173 cm) and the weight of 120 lbs (54 kg). In the 1990s, Mary-Louise joined the company of movie stars and appeared on the screens in the movies Grand Canyon and Fried Green Tomatoes.

One of the most remarkable works of this period was Woody Allen's comedy Bullets Over Broadway, where Parker was lucky to become a partner of John Cusack and Oscar-winning Dianne Wiest.

The actress created sharp dramatic images played in the movies The Client (directed by Joel Schumacher) and The Portrait of a Lady (directed by Jane Campion), which allowed her to be in step with such actors and actresses as Nicole Kidman, Viggo Mortensen and Christian Bale. Mary-Louise also succeeded in her theatrical career participating in the play by Paula Vogel called How I Learned to Drive, staged in 1997 by the Vineyard Theatre in Manhattan.

Creative experience gained in her youth made Parker one of the most desirable and popular actresses. In the early 2000s, she was invited to play in a mini-series created by American writer Tony Kushner. The series tells about the problems in the lives of ordinary people.

The series Angels in America premiered on December 7, 2003, on the HBO Channel. For the role of housewife Harper Pitt, who was addicted to tranquilizers, Mary-Louise received the Emmy and Golden Globe Awards as the best-supporting actress.

In 2004, after the release of the movies Saved! and Miracle Run, Parker again performed on Broadway, playing a major role in the play based on Craig Lucas's play called Reckless. This work brought another nomination for the Tony Award to the actress who became a part of a creative exhibition at Boston University. Other exhibits donated to the library included prizes, personal belongings and a series of hot photographs in swimsuits and lingerie.

At that time, Mary-Louise had not yet received any awards for her multi-part project Weeds, which she deserved competing with the leading actresses of the series Desperate Housewives.

The story of a lonely housewife who became a drug dealer received wide public response and caused many discussions about the legalization of marijuana. Despite criticism, the show aired by Showtime channel for eight seasons became one of the most successful works of the actress who gained new fans and a solid fee.

The filming of Weeds went at the time with other Hollywood projects, the most successful and profitable of which were comedians with Bruce Willis RED and RED-2, biographical western The Assassination of Jesse James by the Coward Robert Ford starring Brad Pitt and family fantasy RIPD starring Ryan Reynolds.

In 2013-2015, the actress again worked on Broadway and participated in the plays The Snow Geese and Heisenberg that were shown on the stage of the New York City Center and the Samuel J. Friedman Theatre.

Parker's most recent work in the movie was his thriller Red Sparrow, directed by Francis Lawrence, which was released in the fall of 2018, as well as the series Billions and Mr. Mercedes, launched on American television in 2016-2017.

In her youth, Mary-Louise was dating for seven years the actor Billy Crudup, known for the movies Sleepers, Mission: Impossible III and Public Enemies. In 2003, the couple broke up, and Parker became a single mother, having given birth to a son, named William Atticus.

Focusing all the time on the work and upbringing of her child, Mary-Louise only by December 2006 has dared to a new relationship. Her choice was Jeffrey Dean Morgan, whom she met on the set of Weeds. The beloved sincerely wanted to become the husband of the actress and two years after the acquaintance proposed to her hand and heart, but this relationship also failed and ended in 2009.

However, there was no reason to call life with the star of the Supernatural and The Walking Dead projects unsuccessful. Their joint achievement is considered to be the adoption of an Ethiopian girl in 2007. The actress didn't give an interview about the decision, but the photo of the girl got on the pages of the unofficial fan Instagram.

Parker described her own affairs and emotions in a memoir entitled Dear Mr. You, published by Scribner Books in November 2015.

Mary-Louise is still not married now. She and her two children live in Brooklyn Heights and often walk the green streets and old boulevards of the fashionable neighborhood in her spare time.

The actress continues to participate in the project Billions on television and plans to finish the 5th season of the show in 2019.

According to some Internet sources, Mary-Louise Parker has a net worth of $16 million.