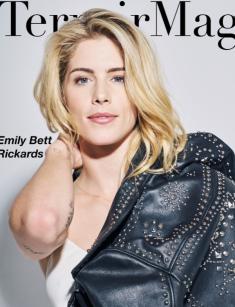 Emily Rickards is one of those celebrities who have found their life vocations as children. Attending drama classes and playing in school’s performances, young Emily knew for sure she would become a bright actress in future. Her professional debut overtook her when she was 18 – and her career began developing. There is a full Rickards’ biography in the article – get acquainted with the star right now!

Emily Rickards' birthplace is British Columbia. She was raised by her mom, named Diane Greig, who worked as a psychologist. There is no information about her dad.

From the very infancy, Rickards understood acting was a passion of her life. So, as a kid, she took dancing and music lessons building the foundation of her future show-business career. Having turned 18, Emily made her professional debut – she took part in recording the video clip for the song ‘Never Gonna Be Alone’ by Nickelback.

2012 is thought to be a real breakthrough in Rickards' career. She took part in an audition for playing in the TV series entitled Arrow. Emily passed the competition well and signed a contract. Remarkably, originally the actress portrayed a secondary character and was to work in the project not for a long time. However, when show's directors noticed her talent, and she started getting positive reviews from its viewers, she became a permanent actress there, appearing in the following seasons.

As for today, Rickards has left the show in May 2019 – series' seventh season became the last one for her. Speaking about her accomplishments while starring there, she has been often named as the program's 'favorite character.' The woman has been nominated for various awards and titles.

Speaking about other projects Emily Rickards starred in, 2012 was marked by her role in the pictures entitled Flicka: Country Pride and Random Acts of Romance. The same year, fans could see Rickards among actors of the movie Romeo Killer.

The year 2014 brought role appearance in Cowgirls 'n Angels – she portrayed a central role. The picture was shown for the first time at the Movie Festival.

The following year, the actress added Brooklyn to the list of pictures she appeared in. Interestingly, she got through a Skype casting for playing there.

In 2016 Emily Rickards was cast of the picture entitled Slumber – directors shoot the project in Los Angeles. Besides, she acted in Axis and Sidekick. In 2016 Rickards also narrated the series entitled Paranormal Solutions. Later that year she was seen in one episode of Comedy Bang! Bang!.

2017 was marked by Rickards' role in the project entitled Funny Story. Interestingly, the movie's directors were looking for an appropriate actress for a long time, and Emily happened to be an ideal option for them. The movie was shown at the International Movie Festival and received mostly positive reviews. Professional critics especially liked Rickards' performance.

As for Emily's most recent works, she took part in the recording of the independent picture entitled We Need to Talk in summer 2019.

Emily Bett’s net worth is evaluated at $6 million.

As for Rickards' private life, she prefers to keep her affairs in secret. However, once there were gossips that she was romantically linked with Colton Haynes. Later it was revealed the latter was gay and the two were just friends.

In 2018 the celebrity announced she was in love with Aisha Tyler. According to some sources, the women are thinking of becoming official spouses, creating a family and adopting a baby.

Apart from acting, Emily Rickards is actively involved in charity. So, she is the owner of the T-shirt campaign aimed to raise people's awareness of dangerous diseases. All the money she makes for selling the clothes is sent to charitable organizations.

At the beginning of 2019, the actress launched her scholarship program.

Besides, once in an interview Rickards shared with journalists that she was keen on sport. So, she does workouts every day and attends fitness classes twice a week.

The celebrity pays much attention to her appearance – she buys only fashion clothes and often changes something in her image. For example, recently she changed blonde hair to brown hair.