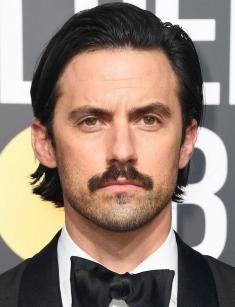 One could hardly imagine that the talented American actor Milo Ventimiglia would spend a whole year jobless after the popular series Heroes and consider some fundamental changes, like going to Italy and getting hired on a farm. Fortunately, the artist overcame the bad streak and received the invitation to the series This Is Us; he was close to winning the Primetime Emmy, Outstanding Lead Actor in a Drama Series. Milo Ventimiglia’s life is full of ambiguous events, just like his characters’ stories. However, it is quite exciting to watch his career develop.

Milo Anthony Ventimiglia was born on July 8, 1977, in Anaheim, California. The actor’s second name “Ventimiglia” can be translated as “twenty miles” from Italian. The boy’s father, Peter, came from an immigrant family and worked in a printing house. The mother, Carol, had diverse roots: British, Irish, Scottish, French, and Cherokee; she was a teacher. Milo has two elder sisters.

The boy spent his childhood in Orange County. He dreamed of winning the Academy Award and joined a school theater to reach his goal. The young actor’s performances were so successful that he was named the best actor of his school and got a scholarship at the American Conservatory Theater.

Ventimiglia’s life could have been different: the young man had doubts about his acting abilities and decided to become a doctor. However, the ten-seconds participation in Will Smith’s show The Fresh Prince of Bel-Air turned out to be fateful. The unknown young actor was amazed: the celebrity paid much attention to him: asked his opinion about the show and wondered what Milo was occupied with.

Milo started with small roles in the series Sabrina, the Teenage Witch and CSI: Crime Scene Investigation. In 2000, he was invited to the teenage series Opposite Sex, but the project was closed after eight episodes.

2004 brought the breakthrough: Ventimiglia participated in the series Gilmore Girls and played Jess Mariano whom the main character, Rory, is dating. The spin-off about Jess and his father was planned, but the financial ordeals interfered. Eventually, Milo left the series and appeared in new seasons as a guest star.

In 2006, the actor gained the lead part of Richard Thorne, a medical college student, in the series The Bedford Diaries. Critics did not appreciate it much, though; the project was closed after the first season.

The same year, the artist was offered the role of the son of Sylvester Stallone’s character in Rocky Balboa. The movie was well accepted and reviewed. Besides, Milo had another leading part in the series Heroes: he personified Peter Petrelli capable of copying other people’s superpowers. Viewers loved the project; the collection of dolls including Peter Petrelli was presented. The artist said in his interviews he was astonished to see that children in his friends’ families played with his character. The fantastic series was aired for four seasons and closed due to decreasing ratings.

In 2008, Milo took part in the horror Pathology; the next year brought the action movie Gamer. Although these works were not as popular as the previous ones, the actor kept receiving new offers: the comedy That's My Boy, the thriller Killing Season, the drama Grace of Monaco, and the action movie Wild Card. All these projects had negative reviews and low ratings.

Ventimiglia continued to look for new experience in TV projects and played in the drama Mob City, Chosen, and the fantastic series The Whispers; all of them failed and closed after the first seasons.

Success came back in 2016 when the actor played Jack Pearson, a construction foreman and a father of three, in the series This Is Us; Mandy Moore personified Jack’s wife. After the first season, Ventimiglia was nominated for Emmy, yet his series colleague Sterling K. Brown surpassed him. After the second season, Milo became the nominee again but did not receive the prize.

In 2018, the artist collaborated with Jennifer Lopez in the comedy Second Act. In 2019, the comedy drama The Art of Racing in the Rain starring Milo Ventimiglia will be released.

Millions of fans follow the actor’s personal life; the actor is not married. At the movie set of Gilmore Girls, Milo got close to the actress Alexis Bledel; they played a couple, and their screen passion turned real. However, the lovers broke up three years later.

When the series Heroes was made, the man was dating Hayden Panettiere; they spent a year together.

The short affair with Jaimie Alexander followed. Later on, Milo was seen with Isabella Brewster, the younger sister of the Fast & Furious star Jordana Brewster. However, Isabella appeared with another young man soon and finally confused everyone by telling the news about her pregnancy from her husband. Fans concluded: Ventimiglia was single.

Milo is a passionate lover of motorcycles. He learns Japanese and believes that mastering a new language helps prevent Alzheimer’s disease. Fans can follow the artist’s Instagram page: he renewed it after a five-year break.

There are pictures of the actor wearing Nightwing’s costume on the Internet. Further on, rumors had it that Milo was a candidate for the part of Bruce Wayne after Ben Affleck had rejected it.

Today, the celebrity continues to work on the new season of the series This Is Us. His net worth is $12 million in 2019.