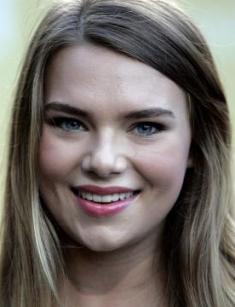 After the release of the series H2O: Just Add Water, Indiana Evans, who played the singer mermaid, Bella, became famous overnight. The leading role in the adventure melodrama Blue Lagoon: The Awakening consolidated the success, and the young woman rose to prominence as an Australian actress and singer.

Indiana Rose Evans was born in Sydney, Australia in the summer of 1990. Indiana’s parents noticed the girl’s talents from an early age. The daughter sang, danced, painted. At the age of 5, the little actress performed for relatives and guests.

At the age of 7, her parents enrolled the daughter in dance lessons, where Indiana Evans learned ballet, tap and jazz dancing. After three years, the girl appeared in commercials and bought a set of drums, which she played with pleasure, amusing her brother, sister, and numerous friends.

Indiana Evans took music lessons to learn to play other instruments. Then the girl wanted to become a model and attended castings at agencies. However, after appearing in a commercial, she set a goal to become an actress.

In 2000, Indiana Evans focused on her acting career and went to Newtown High School of the Performing Arts. Soon the young actress was invited to play in TV shows, and she took up a correspondence course. Evans studied at Newton High School until she turned 15.

Indiana has not forgotten about the second hobby, music. The girl liked the songs of Michael Jackson and the band Spice Girls.

Indiana Evans began an acting career at the age of 13. In 2003, she appeared as Milly Roberts in the television series All Saints. The blond and blue-eyed actress with an angelic face was lucky because viewers noticed the talented girl. Indiana could create a memorable image, and the producers liked that she felt comfortable in front of the cameras.

The same year, the blond Australian actress was involved in the second long-running project, the melodrama Snobs. 13-year-old Indiana Evans landed the leading role of Abby Oakley. The series was broadcast from 2003 to 2004.

As soon as she left the film set of one series, the young actress began working on the other. Evans shot in the soap opera Home and Away from 2004 to 2008, and viewers remembered her heroine, Matilda Hunter. The series starred a dozen stars of Australian cinema, and it turned out to be an ideal springboard for Indiana’s career.

In 2008, the actress starred in three projects, including the films At the Tattooist and Burden. Indiana Evans worked in full-length feature films for the first time because the girl had been offered roles only in television series before. But Indiana could also participate in the drama series. She played a supporting character in the project The Strip.

The prominent project of 2009 was the drama A Model Daughter: The Killing of Caroline Byrne, directed by Australian filmmaker Tony Tilse. The movie is based on a real story that occurred in Sydney in 1955. Cariba Heine played the title character, young model Caroline. Indiana Evans also got a bright role.

The same year, Indiana and Cariba continued to work together. The women participated in the third season of the most popular teen series H2O: Just Add Water. Evans was invited to the project after one of three mermaids, actress Claire Holt, left it. The project starred Cariba Heine, Phoebe Tonkin, Angus McLaren, and Luke Mitchell.

The Mermaid Bella (Indiana Evans) is an oversensitive singer who has won the millions of viewers’ hearts. Moreover, the television rights to the series were acquired by dozens of countries in America and Europe, and Indiana became world famous overnight. H2O: Just Add Water has 200 million viewers.

Evans could improve her acting skill working with well-known actors, and she also managed to demonstrate a music talent. In February 2011, the soundtrack was released on iTunes, and Indiana Evans sang all songs. She later completed a solo soundtrack album for the series.

In 2010, fans saw the star in the Australian-Canadian thriller Arctic Blast and the TV movie Cops L.A.C., in which she played a heroine named Kylie Tremaine.

The Australian actress rode the second wave of popularity the after the release of the melodrama Blue Lagoon: The Awakening, a remake of the 1980 movie based on the novel by Henry De Vere Stacpoole. Indiana Evans and Brenton Thwaites played the title characters, high school students Emma and Dean. Mikael Salomon's melodrama premiered in Russia in 2012.

In 2015, Evans appeared in three projects. Indiana got the role of a tourist in the American horror film Ash vs Evil Dead, which is set in Raimi's Evil Dead universe. Outstanding Bruce Campbell played the title character. In October 2016, the project was renewed for the third season, which is scheduled to premiere in 2018.

In the ABC series Secrets and Lies, Indiana Evans joined the main cast, alongside Ryan Phillippe, Juliette Lewis, and KaDee Strickland. The star appeared as Tash in the series House Husbands which aired on Australian TV channels.

Indiana Evans also develops her music career. She loves Beyoncé and Delta Goodrem and sings her songs or duets with pleasure. Indiana recorded a soundtrack with colleague Harry Styles for the melodrama Blue Lagoon: The Awakening. Evans is an ambassador of an organization that fights violence among schoolchildren.

In 2004, at the beginning of her career, the young actress got acquainted with Sharni Vinson and Jodi Gordon on the film set. The young women are still good friends.

The slim Australian beautiful actress (Evans is 5.41 ft. (165 cm) tall, weighing about 103.61 lbs. (47 kg)) has always attracted the attention of men. She dated colleagues Rhys Wakefield and Lincoln Lewis. After filming in Blue Lagoon: The Awakening, the on-screen love affair with Brenton Thwaites turned into real feelings, but their relationship soon ended.

It is rumored that Indiana Evans and Angus McLaren have a love affair. There are photos on Instagram that depict them together. According to other sources, Indiana and Angus are friends. Journalists believe that the Australian actress has a relationship with actor Alex Williams.

In September 2016, ABC launched the second season of the series Secrets and Lies, in which Evans played Natalie Crawford. But in the spring of 2017, ABC closed the project.

Indiana Evans’s net worth is estimated to be $1 million.