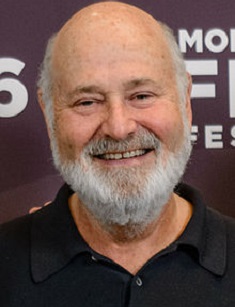 Robert Reiner is an American actor and filmmaker. In acting, Reiner became famous while playing Michael Stivic on All in the Family (1971–1979), after what he won two Emmy Awards. He has created twenty movies as director, including This Is Spinal Tap (1984), When Harry Met Sally... (1989), and The Bucket List (2007).

Robert Reiner was born in New York in 1947. His parents, Estelle and Carl Reiner, were also involved in the film industry. Robert’s mother was an actress who, by the way, appeared in her son’s movie When Harry Met Sally... (1989), and his father still stars in some projects. Robert also has siblings: brother Lucas Reiner, a painter, and sister Annie Reiner, a writer. As you can see, all of Robert's relatives are talented and famous people.

Speaking about Reiner’s education, he studied at the UCLA School of Theater, Film, and Television.

At the end of the 1960s, Reiner acted in various television shows such as Batman (1967), The Beverly Hillbillies (1969), Room 222 (1970), etc. In 1968–1969, he has been writing for the stand-up comedy series, The Smothers Brothers Comedy Hour. In 1971, Robert got the role of Michael Stivic in the All in the Family among Carroll O'Connor, Jean Stapleton, and Sally Struthers. We can say that from All in the Family his fame has started, it was the most-watched television show in the U. S. that time. As Meathead (Robert’s character’s nickname), Reiner has won two Emmy Awards and has been nominated for another three awards.

In 1972, Rob Reiner together with Gerry Isenberg and Phil Mishkin created the television series titled The Super with Richard S. Castellano in a leading role. It demonstrated the life of a funny Italian American superintendent (manager) of the apartment building in New York City. At the beginning of the 1980s, Reiner was mostly known as a director of some successful Hollywood films of different genres, including the rock-band mockumentary This Is Spinal Tap (1984) and historical film Stand by Me (1986).

Since 1987, Robert has been directing his films with his own movie company, “Castle Rock Entertainment." One of his most popular movies of the 1980s is When Harry Met Sally... (1989). This film was based on Reiner's personal life. The thing is that after his divorce, he always was in and out of various relationships, but every time it went not so good. Some traits of the main character, Sally Albright, was based on Nora Ephron, Reiner’s best friend. During directing this movie, Robert met his future wife, Michele Singer, but about that, we will tell a little bit below. When Harry Met Sally... can be totally included in the Top 10 Movies of Reiner.

Besides directing and filming, Reiner also continues starring in various television shows (New Girl, 2012–2018, The Good Fight, 2018) and movies (The Wolf of Wall Street, 2013). Robert’s last film (although, we hope there will be next!) was Shock and Awe (2017), where he also starred.

Reiner has a net worth of $65 million which he gets from his acting and filming career. Together with his wife, Michele Singer Reiner, he has founded nоnprofit оrgаnіzаtions:

I Am Your Child Foundation and Parents Action

Reiner is a liberal activist who is involved in various actual topics. He is against smoking, and his lobbying, for instance, was used in a satirical role on South Park, in one of the episodes named "Butt Out." Robert has also founded the American Foundation for Equal Rights and has the court challenge against California Proposition No. 8, where same-sex marriage in the state is forbidden.

In 1998–2006, Reiner has chaired the California Children and Families Initiative campaign. It had the program consisted of childhood development services that were funded by a tax on tobacco products. In 2006, Robert had to resign from his position due to the criticism for his campaigning for a ballot measure (Prop 82) to fund state-run preschools.

Besides, Robert cares about ecology and environment, and he gained success when tried to make California's Ahmanson Ranch a state park, not a commercial real estate territory.

Speaking about politics, Reiner was thinking about running against California Governor Arnold Schwarzenegger in 2006 but eventually decided not to due to personal reasons. In 2000 and 2004, the director campaigned for Democratic Presidential candidates. For the election in 2008, he supported Hillary Clinton as a future President. After the 2016 election, Robert has been fighting against current U. S. President, Donald Trump, calling him a racist, sexist, anti-gay, anti-Semitic, etc.

In 1971, Robert married Carole Penny Marshall, also an actress and director. She had a daughter Tracy from her previous marriage to a football player, Michael Henry. Reiner adopted the girl. Speaking about Penny Marshall, she had five grandchildren together with Robert. In 1981, the pair divorced, and recently, in 2018, Marshall passed away.

Ten years later, Robert met his second wife, a photographer Michele Singer, while directing When Harry Met Sally. What is interesting, Michelle was the person who inspired Robert to change the ending of the film. In his plans, the characters were supposed to walk away from each other, because this movie was very autobiographical for Robert, and at that time he could not understand how he was going to end up with anybody. However, after meeting Singer, he made his personages stay together, and so did he and Michele. They married in 1989, the year when the movie was released. The spouses have three kids: Jake (born in 1991), Nick (born in 1993), and Romy (born in 1998).

Speaking about Reiner's personal opinion about the film industry, he respects independent films and prefers it more than movies made in the studio. In one of his interviews, Robert mentioned the 1975 year, when the film Jaws came out, and he considered this as the first time when the studio started thinking about blockbusters. He ironically says that “if you put the word “man” and a number in the title, that’s a studio film” like Batman 2, Iron Man 3, etc.

At present, Rob Reiner's net worth is estimated at $60 million.