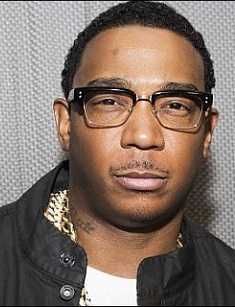 Jeffrey Bruce Atkins, whose stage name is Ja Rule, is an American rapper and actor. He has been working since the 1993 year.

Ja Rule is a possessor of nine music awards and seven studio albums. The label that had a contract with the artist in the 2000s is Murder Inc. Records, in 2010s Jeffrey created his own one, Mpire Music Group.

Jeffrey Bruce Atkins was born in Queens in 1976; his parents’ names are Debra and William. His father left Jeffrey and Debra when the artist was very young. Ja Rule was the only child in the family; his younger sister died without even being born. Jeffrey's mother was a medical worker, so she hadn't enough time for her child, and he was raised by his grandparents.

In childhood, in his grandparents’ house Jeffrey was raised as a Jehovah's Witness, but during the whole life he identifies himself as a Christian, and then he was baptized with his wife in 2013.

Jeffrey’s career started from his participation in the band Cash Money Click in 1993, that’s when he named himself Ja Rule. There is no exciting history about this stage name, just one of Jeffrey’s friends used to call him like that. The group signed a contract with TVT Records, and they have released Get Tha Fortune and 4 My Click. They planned to create their first studio album but in 1995 one of the band’s members, Chris Black, went to jail, and TVT Records terminated the contract. After that, the band released their third track She Swallowed It, but they couldn’t get through without a label, so that year they split.

In 1995 Jeffrey’s old friend, Irv Gotti, got him a contract with a record label, Def Jam Recordings. Ja Rule has been making some guest appearances under the name Jah in other artists’ songs: Time to Build and Usual Suspects by Mic Geronimo, Walk In New York by Onyx, Can I Get A... by Jay-Z and so on.

In 1999 Ja Rule released his first single, Holla Holla, that became a hit and was included in the Billboard Hot 100. That year he created his debut album named Venni Vetti Vecci, that was on Billboard 200 on the second place.

In 2000 Jeffrey released two singles, Between Me and You (with Christina Milian) and Put It on Me (with Vita and Lil' Mo), that were a part of his second album, Rule 3:36. This album was certified triple platinum by the Recording Industry Association of America.

The next studio album was called Pain Is Love, and it was released in 2001. The most successful songs that were included are Livin' It Up (with Case; by the way, this single was based on Stevie Wonder's song Do I Do), Always on Time (with Ashanti), I'm Real (the remix of J. Lo’s single) and Down Ass Bitch (with Charli Baltimore). This album also was certified by the RIAA and was nominated for Grammy in category Best Rap Album. The second joint song of Ja Rule and Ashanti was Mesmerize, which was a part of the fourth Jeffrey’s studio album, Last Temptation (2002).

The fifth album, Blood in My Eye, was full of hate and anger that Ja Rule had against after some rappers, 50 Cent, G-Unit, Eminem, Dr. Dre and others. After the release of Last Temptation, Ja Rule and 50 Cent both have been talking at the radio stations just to insult each other. In this feud, there were a lot of people besides Jeffrey and 50 Cent: Eminem, Obie Trice, D12, DMX and Busta Rhymes (the last two used to be Ja Rule’s friends). In 2003 Ja Rule released the single Loose Change, in its lyrics he insults 50 Cent, and his opponent released Hail Mary as an answer.

In 2004 Jeffrey released his sixth studio album, R.U.L.E. The lead single was Wonderful (with R. Kelly and Ashanti), another single was named Caught Up (with Lloyd), and it was unsuccessful, actually.

In 2009 Ja Rule left the label, Murder Inc., and created his own one, Mpire Music Group.

In 2011 Jeffrey started working on the new album, Pain Is Love 2. In February 2012 it was released and by that time Ja Rule was in prison.

In May 2012 Atkins was released from the prison. He became a part of the single She Tried by N.O.R.E. In a year he released new singles, Fresh Out Da Pen, and Everything.

In 2014 Ja Rule published his book, a memoir, which was called Unruly: The Highs and Lows of Becoming a Man. In this work he writes about his tough youth in New York, his success, being a father and a prison sentence.

In 2018 it was announced that Ja Rule and Ashanti are working on their new joint album. In 2019 Ja Rule is having a small tour in the United States.

Jeffrey had a lot of conflicts with various public figures such as 50 Cent, Foxy Brown, Lil' Mo, DMX.

The most known Ja Rule's feud was the one with 50 Cent. There are different explanations of why all this hostility started. 50 Cent didn’t like Ja Rule because of him trying to be like Tupak. In his turn, Jeffrey claims that while they both were video shooting in Queens, 50 Cent got annoyed because Ja Rule was "getting so much love." The first confrontation took place in Atlanta when Ja Rule hit 50 Cent with a baseball bat, another one was when Black Child (a member of Murder Inc.) stabbed 50 Cent, so there was even need for stitches. Since then artists have begun to insult each other in their songs. This battle ended with the album of Ja Rule, Blood in My Eye.

In 2002 50 Cent signed a contract with two labels, Shady Records and Aftermath, whose founders were Eminem and Dr. Dre respectively. Ja Rule started insulting these two artists because they signed with his enemy. Then he released Loose Change in which he was attacking not only Eminem, Dr. Dre and 50 Cent, but even Eminem’s little daughter, Hailie. As a response, artists released Hailie's Revenge (Doe Rae Mi) where Eminem’s daughter took part.

In 2011 it was announced that the feud between these two artists is over.

However, at the beginning of 2018, 50 Cent again publicly insulted Ja Rule on the radio station, Big Boy's Neighborhood and the next day Ja Rule answered to him on Twitter. And later, when there was a planned Ja Rule’s concert, 50 Cent bought 200 tickets so Ja Rule would see the empty seats in front of him. Then, 50 Cent posted a photoshopped picture on Instagram where he seats all alone at the concert with the signature about him really liking it.

Ja Rule certainly has always had problems with the law.

In 2004 there was an investigation about the conflict that led to a deadly shooting at the party that was organized by Ja Rule. That year he was arrested for driving without a valid license and for keeping the marijuana.

In 2010 Ja Rule was found guilty for possession of a weapon after the concert in 2007 and he got two years in prison. Firstly, he was sent to Rikers Island, a jail complex, and then to Upstate New York. In a year Ja Rule got additional twenty-eight months for nonpayment of taxes

By the 2017 year, Ja Rule faced more than a dozen lawsuits filed by people who bought tickets for Fyre Festival and its investors because, eventually, the festival was called off.

Since the 2001 year Jeffrey has been married, his wife’s name is Aisha Murray. The couple has one daughter, Brittney, and two sons, Jeffrey Jr. and Jordan.

In 2013, after Ja Rule went out of prison, there were a lot of rumors about him and prison cellmate. Jeffrey got really angry, denied all the tales about him being gay and said that he would never leave his wife for another guy.