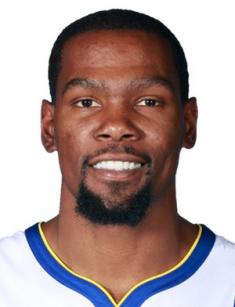 The world basketball champion and the holder of gold Olympic games medals, the American Kevin Durant have won many awards throughout his career at the annual championship of the National Basketball Association and was recognized as the most valuable player of the professional league of the year. After becoming a small forward of the Oakland's Golden State Warriors team, the athlete contributed to the victories in the final series of games. He is considered one of the highest paid basketball players in the world.

Kevin Wayne Durant was born on September 29, 1988, in Washington in the family of the United States Congress servers. It happened so, that soon after the baby was born, his father Wayne Pratt abandoned the family, leaving his wife and four children under the care of the elderly grandmother, Barbara Davis.

The mother of the future basketball player, Wanda, returned to her maiden name Durant and moved from Colombia to Prince George's County, Maryland, settling in a small town in the suburbs of Washington DC.

From an early age, Kevin was different from his classmates, being tall and having a large shoe size. Thanks to this anatomical anomaly, the teenager was immediately admitted to the school basketball team, and by the age of eleven, he became the champion of the junior league in the local club The Jaguars.

Feeling the taste of victory, Durant began to dream of professional sports and since 2003 regularly played for Maryland clubs at the Championships held by the Amateur Athletic Union of the United States. Since then, in memory of the first coach, who died at the age of 35, the young player began to wear a t-shirt with the number 35.

After playing two seasons for the National Christian Academy and spending one year on the Oak Hill team, Kevin enrolled at a private school, Montrose Christian School, and made his debut in the high school team. By the senior year, Durant was named the best player of the children's championship and included in the team of all-stars of the junior amateur league.

When Kevin was eighteen years old, and his height reached 6 feet 75 inches, several competing colleges began to fight for the talented player. As a result, Durant chose the University of Texas at Austin and soon found himself in the starting line-up of the first male division of the Texas Longhorns.

With the first games, the guy demonstrated his skills and found himself on the list of the best shooting players. At the end of the 2006/2007 season, Kevin was named the Washington Post All-Met Basketball Player of the Year with 30 points. He received several awards, including the John R. Wooden Award and the Naismith College Player of the Year Award.

In 2007, at the next draft of the National Basketball Association Durant went to the team of the league's Western Conference Pacific and Northwest divisions, the Seattle SuperSonics, under the 2nd number.

Immediately after that, the world-famous Nike Corporation signed a 60-million sponsorship contract with the professional league athlete. According to the terms of it, he was obliged to wear a uniform and sneakers with the company's logo for seven years. It was one of the most expensive deals with the first-year NBA. Only LeBron James had received a better offer when four years before he was starting an adult career in the Cleveland Cavaliers team.

At the beginning of the 2006/2007 season, Kevin was in the starting line-up of Sonics, and together with another newcomer of the championship, Jeff Green took the position of forward. After playing eighty games, the new player achieved a resp average and became the best young basketball player of the conference at the end of the year.

The following year, Durant's club relocated to Oklahoma City, Oklahoma, and started playing as the Oklahoma City Thunder. The team strengthened its roster, gaining a talented defender of the University of California, Russell Westbrook, in the 2008 draft.

Before the final series of games, where the Thunder did not play because of numerous defeats, Kevin participated in the NBA Rookie of the Year basketball championship for the 1st and 2nd-year players, and scored 46 points, setting a record among the newcomers. In the same weekend, the young athlete won the demonstration competition H-O-R-S-E and at the end of the season took the 3rd place among the best players of the regular NBA championship.

All this time Durant continued to form and by 2009 reached a height of 6 feet 92 inches (211 cm) and gained weight of 240 pounds. Becoming the leader of the attack, the athlete created a combination with the defender Westbrook, and thanks to this, Oklahoma City Thunder in 2010 was in the playoffs of the National Basketball Association.

In the same year, Kevin made his debut in the All-star game and got into the symbolic team of professionals. Having achieved an average result of 30.1 points and beating his rivals in the demonstrative competition of forwards, the young basketball player became the most productive and most valuable player of the annual NBA championship. The title of World Basketball Champion and records of the US national team for the maximum number of points for the tournament and the game were added to these awards.

Before the 2010/2011 season, Durant announced a new 5-year contract with Oklahoma City Thunder for $86 million. Meeting the expectations of the team's management, the forward for the 2nd year in a row brought the Thunders to the final series, appeared at the game of all NBA stars and entered the team of the best basketball players of the association.

The following year, Kevin first overcame the 50-point threshold in the match against the Denver Nuggets team, became the Olympic champion and received the title of The Most Valuable Player of the NBA all-star game. Besides, Oklahoma City Thunder won 47 matches of the regular season and went to the playoffs from the second place. Durant played a decisive role in the victory over several great rivals, but could not change the outcome of the final against The Miami HEAT.

The further career of the basketball player developed rapidly. The Thunders regularly went to the final games of the tournament of the National Basketball Association. And the player himself also participated in the annual NBA All-Star Games and got into the team of the best players of the NBA.

In 2013, Durant became the youngest member of the elite club 50-40-90, realizing 51% of the throws from the game, 41.6% of 3-point hits and 90.5% of goals scored from the penalty area. At the end of his contract with Oklahoma City Thunder, Kevin became a free agent and announced through the Players 'Tribune media platform that he would play for Golden State Warriors in the 2016/2017 season.

Debuting in the company of defenders Andre Iguodala and Draymond Green, Durant brought the team to the 1st place of the regular season. After winning the final of the playoffs, he became the most valuable player of the game against last year's NBA winner the Cleveland Cavaliers.

The following season, the success of the Golden State Warriors was repeated, and Kevin became one of the youngest players to reach the milestone of 20, 000 points. After receiving the second title of the most valuable player in the NBA finals, Durant re-signed the contract with the club and in 2018-2019 continued to play for the California team.

Durant is a public person who regularly appears at ceremonies and star parties. He still maintains a warm relationship with his mother, the details of which were described in the film The Real MVP: The Wanda Pratt Story.

As one of the highest paid basketball players in the world, Kevin owns several properties in the United States, including a luxury Villa worth $1.95 million.

In 2012, the athlete with the 52nd foot size starred in the family comedy film Thunderstruck, and after a while became a certified photographer who worked at football games of the tournament Super Bowl 50.

Charity is considered to be an essential page in Durant's biography. In 2013, the basketball player donated $1 million to the Red Cross Foundation and took the post of the Press Secretary of the Washington branch of the national non-profit extracurricular music program.

Distancing himself from his fans, Kevin stopped using Instagram and other social media and tried to hide the details of his personal life as carefully as possible.

Kevin Durant's net worth is estimated at $170 million. Durant's basketball career continues to develop rapidly, and the last fall his team was fighting with rivals for the chance to get to the playoffs of the season 2018/2019.

Everything in Kevin's love life is good too. Recently, the press learned that his girlfriend is an American model Sabrina Brazil. The two people spent a lot of time together, even though the athlete lives and trains in Oakland, and his fiancée – in Los Angeles.