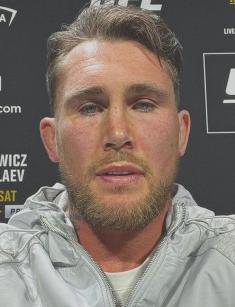 Darren Till, who was born on the 24th of December 1992, is an England-born MMA fighter. Darren is better known for competing in the middleweight division of the famous UFC (Ultimate Fighting Championship). According to the statistics, Darren holds the 10th spot in the UFC middleweight rankings.

Darren is from Liverpool. He was born into a middle-class family. There isn't much information about his parents; all we know about them is that they are from Scotland. When he turned 14, Darren decided to focus more on sports and start doing them professionally. So he dropped out of high school. At the age of 17, Darren joined Team Kaobon and became a mixed martial artist.

In 2012, while at a party, some people stabbed Darren in the back with a knife. Doctors said that it was a huge stroke of luck for him to stay alive after this accident. Because of this, Darren moved to Brazil to continue his sports journey.

Under the direction of Astra Fight Team, Darren spent most of his early MMA career in Brazil. Before relocating to South America, he had a perfect record as an amateur in England. He turned professional in February 2013. Before entering the UFC, he fought in 11 fights in Brazil and one in Argentina, with just two of them ending in decisions. Before switching to the welterweight division in late 2014, Darren fought eight times as a middleweight in 2013. In 2017, Darren made the announcement that he had renewed his five-fight contract with the UFC on August 1.

Darren is the father of three children. The first one was born when the fighter was in Brazil, where he stayed for almost four years. In 2019, Darren got into trouble in Tenerife. When the hotel staff asked the fighter to leave the hotel room, Darren got mad and then started crashing things that were all over the place. Then he stole the taxi. By the way, in 2022, in Sweden, Darren was caught driving a car under the influence. He was quickly arrested by the police.

As of 2022, Darren competed in many championships. Here is the list of ones where Darren won:

Throughout his career, Darren competed in 24 matches. He won 18 of them.