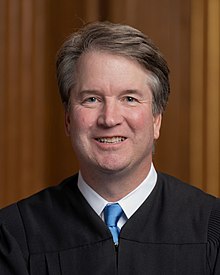 The Washington native, Brett Michael Kavanaugh became well-known in 2018 for his sexual assault charges before his appointment as Associate Justice of the Supreme Court of the United States. Started his career in the White House, he served as a judge in D.C. in 2006 – 2018, where he has established his conservative views by issuing opinions that favor the Second Amendment and religious freedom, among other issues.

Brett married Ashley Estes in 2004. They have two daughters. Kavanaugh has an extremely low net worth, with an estimate of approximately $60,000 in assets and a million-dollar home.

Born on February 12, 1965, Brett became the first child in the family of a lawyer, head of the large cosmetic association and a school teacher. They lived in Bethesda. Kavanaugh attended Mater Dei, an all-boys Catholic elementary school of Maryland. Later he took his Catholic upbringing at Georgetown Preparatory School to heart by serving meals to the homeless and mentoring underprivileged children. He tried to live that creed.

When Brett was 13 years old, his mother earned a Juris Doctor Degree and started to work as a state judge. Brett liked sport, and he was good in it. In high school, he was a cornerback and wide receiver for the football team and became the captain of the basketball team. He also was a staff member of the Little Hoya, the high school’s newspaper.

In 1983 Brett graduated from high school and moved to New Haven, where he enrolled at Yale University and became the member of Deke fraternity. Kavanaugh's classmates were protesting South Africa's apartheid system, rallying for gay rights and backing dining hall workers in a labor dispute.

Brett was more interested in battles on the basketball court than politically charged debates. He was a serious, but not a showy student and sports lover whose drive and competitiveness helped him both on the court and in the classroom. Brett’s basketball career was not as good as his previous sports career.

He tried to join the men’s basketball team, but the head coach didn’t take him. Loving sport, Brett couldn’t stop doing it. He decided to go on to play two years on the JV, plus intramural basketball, football and softball and pickup hoops at the campus gym with other students and locals from surrounding New Haven.

Soon, Brett started to write various articles about sport and health for the student newspaper. In 1987 Kavanaugh graduated from the university. In 1990 Brett earned Juris doctor degree, as his mother, at Yale Law School.

Kavanaugh started his career as a law clerk in the 1990s. He was various judges’ assistant. Soon he was admitted to the Bar of two states. Brett had succeeded to be a partner of the small law firm’s owner. He was a principal author in the case of Clinton and Lewinsky. In 2000 Kavanaugh joined the administration of George W.Bush.

Initially nominated by President George W. Bush to the U.S. Court of Appeals for the District of Columbia Circuit in July 2003, Kavanaugh found the process held up by Democratic senators who accused him of being too partisan. His nomination revived three years later, he was finally confirmed in May 2006 and sworn in by Justice Kennedy.

Kavanaugh established a reputation for being a textualist and originalist, and supporters and critics parsed his nearly 300 opinions over 12 years to determine how he will address some of the era's most contentious issues.

In 2012, Kavanaugh wrote a decision rejecting the EPA’s effort to decrease pollution across state lines, arguing that the agency was exceeding its statutory authority. In the case, EME Homer City Generation v. EPA, Kavanaugh wrote that air pollution could affect both states where the pollution was emitted and other states that were downwind.

He wrote that each state should have the right to regulate pollution on its own. While the federal government set air quality standards, the states had the primary responsibility for determining how to meet those standards and regulating sources within their borders. That decision was later reversed by the Supreme Court.

In 2015 the D.C. court refused to allow a rehearing for a religious group’s challenge to an Obamacare requirement that employers provided birth control to employees. Kavanaugh dissented from that decision. He argued that religious organizations should not be forced to provide contraception, falling in line with conservative thought on the issue.

In a more recent case, Garza vs. Hargan, an undocumented teen was seeking an abortion, and when the appeals court ruled the previous year that she could temporarily leave immigration detention to obtain an abortion, Kavanaugh wrote a dissent, arguing that she did not have the right to “abortion on demand.”

In 2018 Brett Kavanaugh was nominated by President Donald Trump to replace the retiring Justice Anthony Kennedy on Supreme Court. Soon, Christine Blasey Ford, college professor made the allegations against Kavanaugh in a confidential letter to Senator Dianne Feinstein. Ford was accusing Kavanaugh of sexually assaulting her when they were in high school.

It was the beginning of the case of Brett Kavanaugh vs. Christine Ford, which was thoroughly blessed in the news. Soon Ford agreed to testify before Congress. Brett opened his hearing before the Senate Judiciary Committee with an emotional speech that he wrote himself and shared with no one before the hearing.

In his opening statement, Kavanaugh condemned the Democrats on the Senate Judiciary Committee and repeatedly declared that his life and his family had been threatened and ruined. The most chilling line in Kavanaugh's speech was, “what goes around, comes around.” He did not say it with any evident sadness, nor did he renounce it as a value. There was a man apparently threatening revenge on his political enemies, and asking for a lifetime appointment with the supreme power of judicial review with which to do it.

During the interview period, Kavanaugh was speaking about beer when he was asked about his drinking habits.

He said: “I drank beer with my friends. Almost everyone did. Sometimes I had too many beers. Sometimes others did. I like beer. I still like beer. But I did not drink beer to the point of blacking out, and I never sexually assaulted anyone.”

During his second day, Kavanaugh said that “no one is above the law,” and called the landmark 1974 case forcing President Richard Nixon to turn over White House tapes one of the greatest moments in American judicial history. That case, which Kavanaugh said two decades ago may have been wrongly decided, ultimately led to Nixon’s resignation from office.

Little of what emerged from Ford and Kavanaugh’s dueling testimonies in front of the Senate Judiciary Committee could be described as good. Even after hearing from them, the nation was still in the dark about who's speaking the truth. The 7-hour video of the trial was uploaded on YouTube, on the official channel of Fox News.

But there were a few exceptions. Soon Samantha Bee delivered a poignant and humorous message, and Matt Damon’s impression of Kavanaugh was the highlight on Saturday Night Live season premiere. No less funny was a minute-long mashup of Brett’s testimony with Samuel Jackson’s famous Pulp Fiction monologue.

Kavanaugh’s first date with wife, Bush's personal secretary Ashley Estes, was on September 10, 2001. The next morning, they were among those whisked out of the White House during the 9/11 attacks. Their eldest daughter was born 13 months later.

At Brett’s confirmation hearing in May 2006, he spoke of his family, saying,

“And I thank my family for being here. Since I last appeared before the Committee, there have been two major changes in my record, and they’re both sitting behind me. My wife, Ashley Estes Kavanaugh, and my 8-month-old daughter, Margaret Murphy Kavanaugh. She’s watched a little C-SPAN in her day. This is her first live Senate hearing, however. I’m not sure–as you’ve probably already noticed, Mr. Chairman, I’m not sure she’s going to make it very long, but she wanted to be here for a start.”

In 2018 at a swearing-in ceremony, Brett and Trump and family were staying together.

Brett Kavanaugh entered a new position in the Supreme Court on October 9, 2018. Most of Washington Post opinion writers absolutely disagreed with his appointment. However, Brett was not threatened to be replaced. He is in this position until he dies or retires.

The same year the Supreme Court undertook some of the most consequential digital privacy cases that could reverberate across generations to come. Brett Kavanaugh's addition to the high court was one of the crucial voices.

Brett said that the courts were going to have to decide where to draw the line, as law enforcement looked to things like drones, facial recognition software, and predictive policing through social media. Those technologies raised new legal questions because most people didn't think of their social media communications as being public.

Kavanaugh's record did offer a window into where he might land on the 4th Amendment — which protected the right of the people against unreasonable search and seizure and required probable cause as a standard for a warrant — in the years to come. The first Kavanaugh’s case was Stokeling vs. the US. He authored his first opinion on January 8, 2019, in the case of Henry Schein, Inc. v. Archer & White Sales, Inc.