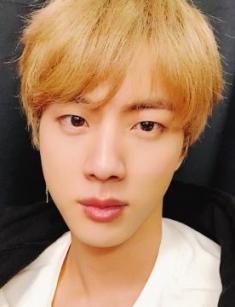 The singer and musician Kim Seok-jin, also known by his stage name Jin, rose to prominence in 2013, when the most popular South Korean boy band BTS was created, which is popular today with all Asian music lovers. Jin is the oldest of 7 members of the teen group. He is not only a vocalist but also a songwriter for BTS. Jin was awarded the fifth-class Hwagwan Order of Cultural Merit by South Korean President Moon Jae-in along with other members of the group.

Kim Seok-jin was born on December 4, 1992, in Gwacheon, South Korea. Kim's family is small but friendly. His parents and older brother have always supported him in creative endeavors. As a child, Kim was a quiet, calm, and shy boy. He could not stand the noise, so he avoided the crowded dining rooms and often dined alone.

If someone told the student that he would be a pop idol, he would be very surprised. After all, Jin did not even think about a creative career but dreamed of becoming the coolest detective in the country. However, shortly before graduating from high school, he changed his mind on the profession and chose a creative direction, entering Konkuk University.

In 2017, Kim graduated from the university and decided to continue his studies at Hanyang Cyber University. This time, he consciously pursued studies in areas other than music.

As a student at Konkuk, Jin was scouted by talent agents while walking down the street and was invited to audition for Big Hit Entertainment. As a result, 21-year-old Kim made his debut in the label-created band Bangtan Boys (BTS), where he began his stellar career.

At first, there were four members in the boy band; then it included three more participants. The guys began performing hip-hop songs and made their debut with the single "No More Dream" in 2013. The debutants immediately won the Best Newcomer Award, the Melon Music Award, and the Golden Disk Award.

From 2014 to 2015, they released 2 EPs, the first studio album Dark & Wild, the two-part compilation album The Most Beautiful Moment in Life and two albums Wake Up and Youth, recorded specially for the Japanese listeners.

The triumph of BTS occurred in 2016 after the release of their second studio album, Wings. By this time, the team had rebranded the group, changing the logo and full name. Now they are titled Beyond The Scene, and their English name remains "BTS."

The album Wings featured numerous hit songs, and the music videos for the singles "Spring Day," "Not Today" and others broke the record on YouTube. Another hit was the track "Awake" written by Jin. Music lovers have liked it so much that the song peaked at number 17 on the Gaon Music Chart and six on the Billboard singles chart.

Thus, the musician proved himself to be a talented songwriter once again. A year earlier, he and his bandmate V wrote the song "It's Definitely You" which became a soundtrack for the drama Hwarang: The Poet Warrior Youth and received many positive reviews.

In 2018, Jin continued to pave his way towards success as a member of the group BTS. In May, they released the album Love Yourself: Tear, and in August fans already enjoyed the trailer for the new album in which Jin performed an intro song.

The group made a real breakthrough in October, when the young people appeared on the cover of Time magazine, performed in Paris on a concert celebrating the friendship between Korea and France, and were awarded the fifth-class Hwagwan Order of Cultural Merit by South Korean President Moon Jae-in.

It is also worth mentioning that Kim has been a host at various shows. So, for example, he co-hosted Music Bank. And in early 2017, he became a member of the reality-documentary show Law of the Jungle.

In 2018, the musician was ranked as the 11th most well-known idol in South Korea, via data collected by analytics company Gallup Korea.

Kim Seok-jin is the oldest member in the group, so friends jokingly call him "mother." He really takes care of his colleagues. His friend Min Yoon-gi, better known by the stage name Suga, even joked that he would have married him if Jin were a girl. Kim loves to cook and often treats the young men to dinner.

"But, when I cook, the guests are not very enthusiastic, because my food is boring. It's all because we keep to a diet, and the only possible meal is a bundle of chicken, onion, paprika, and rice," the young man admits.

Since Kim loves to have a good meal, his wife must cook well and create a cozy atmosphere. In this case, the girl should be attractive and share his interests. Jin dreams of two children: an older daughter and younger son. It is still unknown whether he has a girlfriend who can make him happy.

But other interesting facts of his personal life were made public. For example, the musician speaks a little Chinese, but it is difficult for him to speak English. The man is passionate about Super Mario computer games and loves pets.

The tall, slender, handsome man (his height is 5.87 ft. (179 cm)) is the dream of millions of girls around the world. At the same time, Jin is critical of his appearance. For example, he does not like his image with glasses, because he seems to himself to be unconfident and timid.

In February 2019, BTS attended the 61st Annual Grammy Awards ceremony, becoming the first Korean group in the history of the legendary award. In April, their new studio album, Map of the Soul: Persona, was released, and in May the band went on a Love Yourself: Speak Yourself world tour.

Jin has recently begun running a business. In 2018, the singer opened a Japanese restaurant in Seoul along with his older brother.

Kim Seok-jin has a net worth of $8 million.