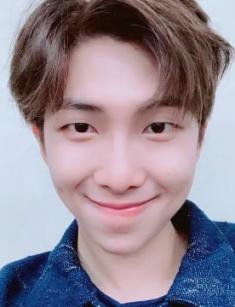 Kim Nam-joon is a Korean hip-hop star, frontman, and songwriter for the boy band BTS. The vocalist and the band perform K-pop songs, which originated in South Korea and are a mix of electro-pop, hip-hop, and R&B music. Kim Nam-joon and the group BTS are called the brightest representatives of the K-pop genre and the subculture that is becoming more and more popular with young people.

The future singer RM was born in the autumn of 1994 in Ilsan-gu, a district in Goyang, South Korea. In addition to the son, the youngest daughter Kim Geong Min grew up in the family. Kim Nam-joon tries not to attract too much attention of the press and fans to his sister and does not tell about her on social media.

There is no information about his parents' occupation. Kim's family is a closed book. So he tries to protect his family and does not allow fans and journalists to interfere with his family life.

In childhood, Kim Nam-joon was obsessed with the idea of becoming a guard. The boy liked the uniform, and the profession seemed incredibly romantic and covered with glory.

At an early age, the boy distinguished himself with curiosity and craving for science. The parents and teachers were surprised by the record set by the boy in the seventh grade. Kim Nam-joon scored the most points in the English school test, leaving all peers behind. The young man had 850 points and was scored in the top 1% of the nation who had similar results.

Soon, Kim confirmed these result, passing an IQ test. The IQ of 148 equated the boy with geniuses and Nobel prize winners.

The future vocalist and musician later shared that the comedy series Friends, which disc he asked the mother to buy, helped him learn English perfectly. So, his favorite Hollywood stars Matthew Perry and Jennifer Aniston helped Kim to speak without an accent, using colloquial expressions.

In addition to English, the rapper learned Japanese. Later, the language of the Land of the Rising Sun helped the musician to record the Japanese song versions, attracting the army of fans from Japan.

Kim graduated from Global Cyber University, where he earned a Broadcasting and Performing Arts degree.

Kim Nam-joon made his musical debut under the moniker "Runch Randa." The young man came up with such a nickname for the computer game Maple Story, and then took it as a stage name. Kim pleased the first fans with solo tracks, which he recorded with a friend, hip hop singer Zico. But it was just the beginning of his music career, and he became famous much later.

In 2010, the BTS group was formed, the first member and the leader was Kim Nam-joon. At that time, he took the stage name Rap Monster, which was later shortened.

It had taken the band three years of grueling rehearsals before hip-hop lovers saw BTS and could enjoy their songs. In addition to RM, the boy band included rappers Suga, Jin, J-Hope, Jimin, V, and Jungkook.

If Kim had excellent singing abilities, then he had to improve dancing, which was essential for performances. The Rap Monster had problems with plastic movements, and the choreographer ironically called him the "dancing miracle."

RM was not only the lead vocalist but also a producer and songwriter for BTS. As a rap songwriter, Kim Nam-joon had to read a lot, because rappers' songs become popular only when they are filled with vivid images and deep meaning. But Kim began to devote all his free time to concerts and tours around South Korea and beyond its borders, so he changed a book for a notebook in which he wrote down new and interesting words and statements.

In 2013, RM and BTS became famous. The group won awards and prizes at home and made a significant breakthrough around the world. RM willingly collaborated with Korean and American colleagues, releasing collaborative songs and music videos. His 2015 solo mixtape Rush peaked at number 48 in the best 50 hip-hop albums of the year.

In the summer of 2016, RM became the producer of the track "Dilemma," recorded by the vocal duo Homme. In the spring of 2017, Kim and his American colleague, Wale, delighted fans with the song "Change" and a music video for it. In December 2017, the rapper and the American rock band Fall Out Boy recorded a remix of "Champion."

Being a member of the South Korean boy band BTS, June managed to develop a solo career. In 2018, his name was included in a list entitled "10 Korean Rappers You Should Know" of XXL magazine. Kim has written dozens of tracks for BTS and other bands. In America, RM and BTS are stars. The Korean rappers appeared in the talk show Jimmy Kimmel Live!. Later, Ellen DeGeneres invited them to her TV show.

In 2017 and 2018, the Korean singers were awarded the Billboard Music Awards for Top Social Artist.

In the autumn of 2018, the Rap Monster released the second mixtape Mono and, was awarded the fifth-class Hwagwan Order of Cultural Merit by the President of South Korea along with the other members of the band.

The hip-hop star has neither a wife nor children. And it is unknown whether RM has a girlfriend or not. Music holds pride of place in his life, forcing his personal life onto the back burner.

There is information that RM and his colleagues signed a contract prohibiting relations. However, they deny it and say that they simply do not have time to pay attention to girls due to the busy tour schedule.

The vocalist said in an interview that he dreamed of a fair-skinned girl with a pleasant voice who would wear snow-white clothes and Converse sneakers.

Kim Nam-joon does not have an Instagram page, but millions of people have subscribed to the fan account of the star. In 2019, RM's new photos have been posted there, depicting his everyday life and the group's performances. But it is difficult to find the pictures, featuring his relatives and the beloved girl.

Kim Nam-joon has a net worth of $8 million.