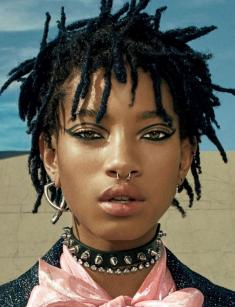 Willow Smith has been surrounded by a halo of fame since birth because the singer is the daughter of famous parents. Will and Jada Pinkett Smith gave her every opportunity to realize ideas, ambitions and the girl did not neglect them. Today she is a talented performer, actress and designer. Every appearance of the artist in public is of interest to the media and fans.

Willow Smith was born on October 31, 2000, in Los Angeles. Since the girl's appearance, the paparazzi cameras have been aimed at her and her brothers, Trey and Jaden. The excessive attention leaves its mark on the understanding of the world and attitude towards people. But the care of parents helped to bring up the right perception to a lot of attention to the family.

The parents and brothers of Willow work in the field of show business. Jada and Will are actors, producers and singers, so it's no surprise that the children followed their footsteps, preferring the scene to other directions. Willow was not one of those children whose talent is manifested through numerous financial influences from parents.

The girl grew an artistic, creative person; she received home education but understood the importance of learning and did not want to stop it. Her penchant for singing and dancing was noted from a young age. She preferred a creative approach to the appearance at the age of 5-7 years. Parents did not limit their daughter, tried to support her hobbies and to be with her in difficult moments.

Willow Smith's biography is connected with two directions: cinema and music. For the first time, she faced the lens of a professional camera at the age of seven years. The participation in the filming of a fantastic action movie I Am Legend was the girl's debut.

Her father played the main role in the film but it did not affect the choice of producers, as Willow participated in the casting without additional privileges. The viewing revealed her acting skills, as well as endurance. The shooting took place in the cold and proved to be a time-consuming process because it was sometimes seriously delayed. Fatigue and cold were not the obstacles for Willow.

In 2008, there was the premiere of the film Kit Kittredge: An American Girl with the participation of a young actress. The project brought Young Artist Awards to the aspiring performer.

Her next work was voicing of the cartoon Madagascar: Escape 2 Africa, the girl gave the voice of the hippopotamus Gloria. 2009 brought the filming in the series True Jackson, VP, produced by the children's entertainment channel Nickelodeon.

In 2010, Willow entered the music arena. Her mentor was the rapper and producer Shawn Corey Carter, known in the music community as Jay Z. It is difficult not to achieve success with the mentorship of such a mastodon stage. Therefore, the first single of the singer was popular. The song "Whip My Hair" literally broke into the American charts.

The audience did not leave unnoticed the achievements of the teenager. In 2011, Willow was the winner at the Kid’s Choice Awards and released the next single "21st Century Girl" after a while. The clip was shot in support of the song. Willow remained under the protection of the label Jay Z. Her parents supported this choice because her producers were well-versed in show business and respected her attention and support. Willow found the second family in the face of mentors.

The release of Smith's debut album was planned in 2012. The working title "Knees and Elbows" was given. The release of the album was delayed but the singer pleased fans with the song "I Am Me" and the video for this song. The girl explained to the audience in this single that she is who she is, what was symbolic in the discussion of her personal life, appearance and creative activity.

In 2013, Willow recorded the songs "Sugar and Spice" and "Drowning" and she released the song "Kite" together with her brother Jaden Smith, who also found himself in the musical sphere. Willow does not refuse to co-create, so she recorded a duet with DJ Fabrega the single "Melodic Chaotic" the same year. The radio station released in the rotation the song "The Intro" and "Summer Fling".

During this period, the girl was often criticized for the inconsistency of her work age and creative work. Willow was always serious and had an objective perception of reality. The point of view expressed in the original message did not inspire confidence among critics this time. In 2014, Willow again recorded a single with her brother, the song "5", after which she released own single "8".

Willow's creative and ambitious approach to any business is of interest to the public and journalists. The talented girl showed herself in the movies, on stage and in the field of design. At first, she surprised others with her appearance, claiming the image support of creativity.

At the age of 14, Smith was offered cooperation by several modeling agencies. In 2015, she was a representative of the brand Marc Jacobs and she released her merch-line socks in 2016. In 2016, the artist's photo appeared on the cover of the Paris magazine "Vogue."

As a teenager, Willow gave reasons to discuss the orientation and details of her personal life. Journalists are happy to exaggerate the slightest hints of non-compliance with the standards, so they explained the short haircut of the girl and the bright appearance as an atypical sexual orientation.

Relatives and friends did not comment on these assumptions and Willow denied the speculation, appearing in public with a guy Moisés Arias. The relationship between the young people did not last long. The explanation for it was Smith's developing career.

The artist has a verified account on "Instagram." You cannot find a photo in a swimsuit or seductive pictures that the audience expects. The girl often publishes portraits of the authorship of fans, puts photos from concerts and pictures that mean a lot to her. Also, there are pictures with her family and from travel on the page.

Now critics call Willow Smith an icon of style, comparing the girl with Rihanna for her image and lack of fear of discussions. The artist often changes hairstyles, manages to combine incongruous with taste in the wardrobe, setting new trends. She works on her collection of clothes and accessories together with her brother Jaden.

Smith's filmography has not been replenished with her new works for a long time but it does not mean that she stopped in the development of this area. In 2019, the girl has a lot of interesting projects. The close direction for Willow is charity. The actress is an ambassador for a charitable organization, providing support for African children with AIDS.