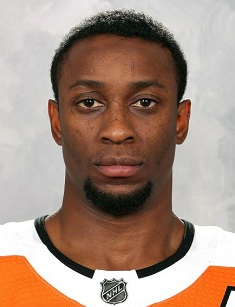 One might have heard about Wayne Simmonds on the TV or have seen a stadium series jersey with his name on it, that can be easily ordered from Amazon. But who he actually is?

Wayne Simmonds is a professional ice hockey player on the right wing, born and raised in Canada. However, he played for several American teams; now he participates in the National Hockey League as a member of the Nashville Predators.

Simmonds was born on the 26th of August, 1988 to Cyril Simmonds and Wanda Mercury-Simmonds.

Initially, his family lived in North Preston, Nova Scotia, which is the most famous community of African Canadians in the country.

Wayne was one of five children among three brothers and a sister.

Although he was brought up in Scarborough, a suburb of Toronto (now it is an administrative division), he was used to supporting other players and teams. His favorite club was the Detroit Red Wings, and the player he fancied was their member Sergei Fedorov.

Everyone who desires to excel at something has to go all the way from the bottom. A young hockey player Wayne started as a typical teen playing in A and AA level clubs in the east end. Simmonds attended the 2003-2004 season of the Greater Toronto Hockey League as a part of the team Minor Midget Toronto Aces.

In the next season, he was already a member of AAA hockey team Toronto Jr. Canadiens midgets. There Simmonds met his future friend, Chris Stewart, who would also continue with NHL. The two players would also buy a house in their home city Toronto together for resting during the off-season.

It was the spring of 2015 when McCourt, a general manager of the club named the Brockville Braves, noticed Simmonds. The Braves was a Junior "A" team which is a member of a Central Canada Hockey League. It also gave rise to another NHL player Larry Robinson.

The Owen Sound Attack chose Simmonds in the sixth round of the 114th OHL Priority Selection, and this was the team he was playing for during his major junior career. He also joined Sault Ste. Marie Greyhounds for some time.

The professional career started with the 2007 NHL Entry Draft. He was selected in the second round by the Los Angeles Kings for whom he was playing until 2011. Simmonds scored his first NHL goal in the game against the Anaheim Ducks. He successfully used a rebound of the puck and sent it straight past the goalkeeper. Wayne rapidly became a favorite and was highly respected for his moral rules on the ice and in regular life. He admitted that he took this trait over from his parents.

In the second NHL season, Simmonds decided to improve his offensive skills and aspired to become the most scoring player. With a lot of effort, he doubled the number he scored in the last season, making it 40. He also was the L.A. Kings leader in plus-minus, a hockey statistics designated to measure a player's goal differential.

A right-handed shooter was also paid attention by the heads of the Atlanta Thrashers after a trade with Ilya Kovalchuk was fulfilled. However, it was a disastrous one, but Simmonds was on the list of players, that the Thrashers wanted in return for Kovalchuk.

In 2011 Simmonds became a member of the Philadelphia Flyers on the condition of a two-year contract. The average salary of $1.75 million was announced too.

On several games with the Flyers, something extraordinary happened. On the 11th of February, 2012 Simmonds obtained a Gordie Howe hat-trick, that included both scoring a goal, recording an assist and getting in a fight during one game. The Flyers played against the New York Rangers and eventually lost. Simmonds would achieve two more Gordie Howe hat-tricks in February 2013.

In a game against the Ottawa Senators in March of the same year, Wayne recorded a goal he didn’t actually pursue: the puck was crookedly sent by another Flyers player, Brayden Schenn, and hit Simmonds’ head. But his forehead saved the situation and the puck finally landed in the net.

Later that year the Philadelphia Flyers extended Simmonds’ contract for the next 6 years and rose up his fee to $4 million. The club started to hold on a good player which Simmonds definitely was.

The hockey player set a high mark of 60 points in a season and maintained it for several seasons. He was also physically fit, even in comparison with his colleagues, and led the Flyers in penalty minutes.

There was only one occasion of Wayne Simmonds breaking the rules. He raised a gloved hand against the New York Rangers' captain Ryan McDonagh and hit him, but got away with only a warning.

During the pre-last season with the Flyers Simmonds performed with numerous injuries all over his body, including the missing teeth, but didn’t lose the mark. He was commended for the Mark Messier Leadership Award, which is usually given for individual achievements and also for the contribution to sport and society.

Unfortunately, the 2018–19 season was a disappointing one with the production of only 27 points. Simmonds was traded to the Nashville Predators on February 25, 2019.

Simmonds took part in regular seasons starting from 2004 and went to the playoffs nine times.

He also participated in the international competitions such as three World Championships. He started with the Junior one in 2008 and won the gold medal over Sweden with his national team.

In 2013 Simmonds continued his struggle with the senior team on the WC held in Scandinavia, but Canadians could only reach and secure the fifth position on the ranking list. He tried again in 2017, and the team rose to the second place this time, loosing — what a coincidence! — to Sweden. Swedish scored a winning goal with a penalty shot and became the world champions for the 11th time.

Simmonds played in the All-Star Game several times: formerly in the Third All-Star Team of the OHL (Ontario Hockey League) which is designated for young pros from 16 to 21. In 2017 he participated in the NHL game which is an annual event for the strongest and the most prospective players in the league. Simmonds did a great job, scoring numerous goals and also a game-winning one in championship round. He was named the Most Valuable Player of the game, which is quite an honorable title.

An eligible fiance Wayne Simmonds was noticed only in one affair throughout his celebrity life. His girlfriend’s name is Crystal Corey, and it is pretty unclear when they got together. None of them is reported to have any serious relationship in the past. Wayne prefers to keep his social media accounts strictly professional, and there are no Crystal’s accounts so far.

However, a long relationship ended logically, resulting in a proposal and future marriage. Simmonds and Corey got engaged in January 2017, and a shiny ring appeared on the Instagram because Wayne didn’t keep himself from such happiness (however, now the photo is deleted). There were no details on their ceremony, but only a tweet of Complete Hockey News on July 8, 2018, that congratulated the newlyweds.

An act of racism was generated towards Wayne Simmonds. On September 22, 2011, while he was playing for the Philadelphia Flyers, he faced a banana peel that was thrown at his feet. At that same moment, Simmonds was performing his shootout. Perhaps it is hard to understand what the hockey player experienced back then, but one might try watching the banana video. Later on, the NHL commissioner gave a speech, apologizing in front of the whole society.