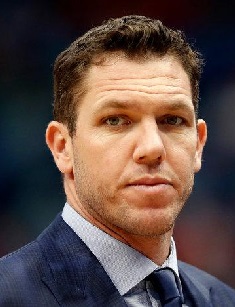 Luke Theodore Walton is an American former professional basketball player. Having taken part in 10 NBA seasons, Luke gave up playing and became a professional coach. The teams he coached are the Golden State Warriors, the New Orleans Pelicans, the Los Angeles Lakers, and the Sacramento Kings.

Luke Walton was born in San Diego, California, on March 28, 1980, to the family of former star and NBA Hall-of-Famer Bill Walton and his wife, Christy Walton. The future sportsman was named in honor of his father's close friend and former Portland Trail Blazers Maurice Lucas. The family is considered to be the descendants of Samuel Walton, an American entrepreneur, founder of Wal-Mart Stores, a multinational retail corporation. However, there is no proof.

Walton has 3 siblings: brothers Adam, Nathan, and Chris. He studied at University of San Diego High School and graduated in 1998.

Luke became interested in basketball in his childhood due to Bill. His father taught the children to play in their free time. In his future admissions, the player confessed he had always strived to win. If Luke lost the game, he could keep silent for several days going through the grief. By the way, Walton was not a social kid: he rarely talked a lot. According to him, he expressed himself while playing.

However, his dad didn't try to make the sons play. He often said them they were not obliged to be sportsmen and encouraged to find their passions in life: piano, school, etc.

The older Walton had been a UCLA player and succeeded to earn College Player of the Year Awards for three times and two National Titles. Also, he got several NBA titles in 1977 and 1986.

Being a student, Walton had the icons: Larry Bird, then Boston Celtics player, John Wooden, then head coach at the University of California, Los Angeles, Phil Jackson and Karl Anthony Malone who performed for the Los Angeles Lakers.

Walton's family had several rules. So, all its members had to arrange around the table every evening to dinner.

Luke's parents divorced when he was 9. He has often seen them quarreling and wanted to get a master's degree in interpersonal relationships.

In 1999 Walton entered the University of Arizona where joined the basketball team of students. His coach was Lute Olson. Being a junior student, Luke made 15,7 points, 7,3 rebounds, 6,3 assists, 1,6 steals and 0,6 blocks per game on average. In the sophomore year, the player recorded average results of 10,8 points, 5,6 rebounds, 5,1 assists and 0,9 blocks per game.

In 2003, having completed work in family studies and human development, he graduated.

Luke's family launched the Walton Family Foundation - the organization aimed to do charity work. So, they donated $1 billion to educational reform: to John Brown University, University of California, the University of the Ozarks and many other educational establishments.

Studying in college, Walton made a tattoo: four of the Grateful Dead dancing skeletons, but instead of having top hats and canes they're spinning basketballs. They represent Luke and his three brothers.

The same year, Walton applied for the NBA draft where the Los Angeles Lakers selected him. During 9 years he performed there as a reserve player and got the love of the team's fans. In 2005 Luke was lucky to represent the club in the Shooting Stars Competition during All-Star Weekend.

The season 2006-2007 is the best his NBA season. On December 8, 2006, Walton, fighting against the Atlanta Hawks registered 25 points. As a starting small forward, he showed perfect results of blocks, steals, rebounds and points. Due to it, on July 12, 2007, Duke signed a 6-year, $30 million contract with the Lakers. The next three seasons were successful for them: in 2008 they got to the finals but lost to Celtics, they defeated the Magic in 2009 and Celtics in 2010 to win back-to-back championships. So, Luke took part in two championships like his father had done.

In 2012 the team traded Walton and Jason Kapono to the Cleveland Cavaliers in exchange for Ramon Sessions and Christian Eyenga.

In 2011 the University of Memphis invited Walton to work as an assistant coach during the 2011 NBA lockout. In November 2013 Luke became a player development coach in the Los Angeles D-Fenders NBA Development League.

The next year, the Golden State Warriors coach invited him to become an assistant. So, the team managed to beat the Cleveland Cavaliers in the playoff and won the NBA finals in 2015.

In the 2015-2016 season, Luke was appointed as the Warriors interim head coach after Steve Kerr got injured in a training camp and had to undergo injury.

Walton made his coaching debut in the season opener on October 27 in a 111–95 win over the New Orleans Pelicans. Three games later, he presided over the third-largest margin of victory in franchise history when the Warriors defeated the Memphis Grizzlies, 119–69, which was also the most significant margin in the league since 1991. The Warriors set a new NBA record by winning their first four games by a total margin of 100 points.With a win over the Los Angeles Lakers on November 24, he guided the Warriors to a 16th consecutive victory to start the season, a new NBA record.

Due to such a brilliant job, Walton got several awards, such as the NBA Western Conference Coach of the Month.

After working for the Warriors, Luke was hired by the Los Angeles Lakers as the replacement for Byron Scott. As a coach, Walton had had only 43 games, and many people hesitated about his ability to help the team.

Due to him, in a new season, the team improved its previous record of 17-65 – they made 26-56. The team's members such as Magic Johnson and Rob Pelinka liked the coach and said he would stay the best trainer for them. The Lakers succeeded to win 5 of 6 last games of the season.

Walton has always thought coaching to be a serious job demanding a full fusion with the players he trained. So, in 2016, a big scandal occurred: in the fight Warriors lost the Kings, Luke started shouting at referees cause he didn't agree with the results and was subsequently ejected. The news was on every highlight.

The next season was closed with the record 35-47.

In the 2018-2019 season, the club signed a 4 year $153,3 million contract with LeBron James. The team opened this season with the score 2-5, and its management reprimanded Walton and demanded immediate results. Unfortunately, the best players such as James and Rajon Rondo got injured while playing and the Lakers finished with the record 35-47. So, the management wanted to fire Walton. Several weeks later, the team and Walton agreed to part ways. Los Angeles Lakers didn't reach the playoff.

While working as a player, Luke got a $6 million salary. His net worth is $16 million.

Luke Walton started working for the Spectrum SportsNet (known then as Time Warner Cable SportsNet) in 2013 to join their Lakers on-air broadcast team.

In April 2019, his colleague Kelli Tennant accused him of sexual assault in a Santa Monica hotel room in 2014.

"I walked up to the hotel with him and continued to tell myself not to overthink it and that I could trust him," Tennant said at a press conference. "Out of nowhere he got on top of me and pinned me down to the bed, and held my arms down with all of his weight while he kissed my neck and my face and my chest."

His attorney Mark Baute denied all the allegations.

Studying at the University, in 2002 Walton met his future wife, Bre Ladd. The woman is also a former sportsman – she played volleyball. Bre was born on April 19, 1984, to the family of Bob and Tammie in Tucson, Arizona. Being a college volleyball player performing on the middle hitter position, she showed the best results of career kills (971), career aces (146) and career blocks (146).

“He put a jewelry box inside of a really big box, and I assumed he’d gotten me the earrings I’d asked for,” told Bre.

“I opened the box and saw my ring, and was so genuinely shocked, even after all that time.”

The wedding was held in Aspen, Colorado on August 17. On the wedding day, Ladd wore diamonds all over her body, and her cuff was worth $240K.

Luke Walton was a second-team All-American and a two-time first-team all-conference selection in the Pac-10. In 2014, for his coaching records, he was named the NBA Western Conference Coach of the Month.