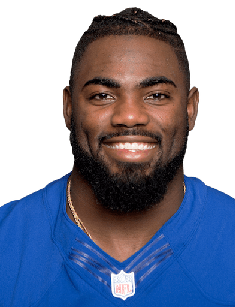 Landon Alexander Collins is one of the popular names in the American football scene. He is best known as a football safety for the Washington Redskins of the NFL (National Football League). He played college football at Alabama University for straight three years. He also won the BCS National Championship Game in 2013 during his freshman year. Currently, he plays for the New York Giants.

Collins was born to mother April Justin and father Thomas Collins. He also has a brother named Gerald Willis and sister named Gerrah Willis. His mom has always been loving and caring for him.

From a very early age, he was interested in football. Between the age of four and twelve, he was coached by his Father, Thomas Collins. In one of his interview, he said, those days were the most influential days of his life and he is great full to his father for everything he has done. In his career, till date, he has changed quite a number of the jersey as he switched teams.

After completing his high school, he joined the University of Alabama where he participated in the college football team and played for three seasons. During his freshman year in 2012, Collins served as a backup. This very year Alabama won the BCS National Championship.

Before joining Alabama he had received offers from many other universities but he chose to stick to Alabama University. During his senior year, he was declared for the NFL Draft 2015. He has signed a contract by the New York Giants. Since then he has maintained a good career stats.

It was in 2015 when Collins started playing at a professional level. Since 2015 he has only improved in his games and has left people awestruck with his talent. He also bagged the title of Pro Bowl in 2016 and 2017 with the New York Giants. In the year 2017, Collins received the award of the NFC Defensive Player of the Year.

New York Giants declared Collins as the 33rd overall in the NFL Draft 2015. He made his professional debut in the New York Giant’s season opener which was a game against the Dallas Cowboys. He also earned quite a few titles for himself.

Collins is not married but he is surely engaged with Victoria Lowrey, his college girlfriend. Other than that he has three children from multiple women who he dated in the past.

Collins is playing for New York Giants. However, there are rumors that state that he is going to leave the team.

He also bagged many awards in his career till date. It can be said that he justified his NFL jersey with all his victories. Some of his career highlights:

Collins is truly a born star who is shining the football field with his talent and skills. This football player with black hair still finds his Alabama jersey to be very dear to him.