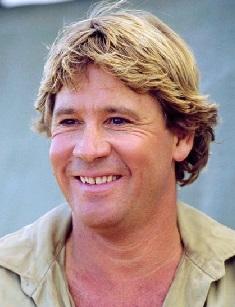 Steve Irwin, affectionately known as The Crocodile Hunter, was Australian television personality and zoo keeper who was synonymous with wildlife.

Steve’s birthday is February 22, 1962 and he was born to Bob and Lyn Irwin. At eight years old, Steve moved with his parents to Queensland where he was schooled. His parents, being wildlife enthusiasts started a reptile and fauna park, which fostered his interest in and interaction with animals such as crocodiles.

Steve met Terri Raines in 1991 and married her in 1992. During their marriage, they had two kids, a son, Robert, (who they named after Steve’s father) and a daughter, Bindi. Prior to starting their family with children, the couple went on an interesting honeymoon where they trapped crocodiles together. Video footage of their adventures became the first episode of the legendary show, Crocodile Hunter.

This was a show where Irwin interacted with and captured numerous animals (especially reptiles, such as crocodiles), while sporting his immortalized costume of a top and khaki shorts that looked like a romper in unison. Apart from his signature dress, his appearances were synonymous with quotes such as “Crikey.” This was an expression Steve used to denote excitement, interest, or surprise. He reached the height of his popularity through this program as he fascinated viewers with some of his daring exploits with animals. These exploits are suicide attempts when carried out by someone less knowledgeable about these animals.

Apart from Crocodile Hunter, Steve appeared on screen in programs such as The Ten Deadliest Snakes in the World, The Tonight Show with Jay Leno, Dr. Dolittle 2, The Crocodile Hunter: Collision Course, Wiggly Safari, and he was a voice actor for the animated film Happy Feet. At this time (1998 to 2003), it seemed as if there was no day where Steve Irwin was not on TV. This was further reinforced by the fact that there were also voluntary and involuntary cameo appearances such as one in the controversial South Park cartoon.

Apart from being featured in or at the center of films, Steve was at the heart of various media campaigns. Three of his most notable exploits here are advocating for and promoting tourism, being an ambassador for the passenger train known as The Ghan, and his joining of the Australian Quarantine and Inspection Service.

Preservation of endangered animals and the environment held an important place in Steve’s heart. This mutual interest is one of the reasons he adored his wife who was a naturalist. While he was dedicated to sharing his adventures on the big screen, he alluded to the fact that his long-term goal was to save endangered species. Irwin was at the center of several bodies dedicated to this cause such as the Wildlife Warriors Worldwide and the International Crocodile Rescue.

In an unfortunate turn of events that saddened the world in 2006, Steve Irwin was killed by a stingray. The cause of death was his bleeding to death after being struck in the heart by the animal. A private funeral was held in September 2006 by family and friends.

Unsurprisingly, Steve was named as the recipient of quite a few awards. These include the Australian Centenary Medal, an induction into the Queensland Business Leaders Hall of Fame, a Queensland Great Award, and the chance to name the Elseya Irwini turtle.