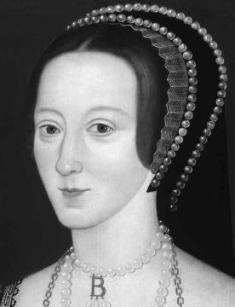 The queen consort of England Anne Boleyn was born in 1501; some sources claim it was 1507. The future Queen Elizabeth I was born to the family of Anne and the ruling king Henry VIII; thanks to this union, Boleyn became a key figure in the English Reformation.

Anne Boleyn came from a noble family. Her father was Thomas Boleyn, who became the Earl of Wiltshire and Ormond later; the mother, Lady Elizabeth Howard, belonged to an old noble name, too. The Boleyns accompanied the monarchs throughout their lives: Thomas regularly went abroad to perform his diplomatic duties for Henry VIII, and the king appreciated his skills and knowledge of several foreign languages. The mother served as a lady-in-waiting for Elizabeth of York and Catherine of Aragon.

The family owned an estate in Blickling, Norfolk; they were respected among the highest circles. The noble origin influenced the children’s lives. Anne, her brothers, and sister Mary grew up at Hever Castle, Kent. The father went to Brussels as a diplomat, and his daughters were invited to the school of Margaret of Austria the next year.

Anne’s parents were going to move to Paris; Anne and Mary joined Mary Tudor’s escort. Henry’s sister was supposed to marry the French king Louis XII of France, but he passed away due to his senior age. Mary Tudor returned to England, and Anne Boleyn lived at the court of Francis I of France; she was a lady-in-waiting for the queen Claude of France for seven years and finished her education at this period.

In 1522, Anne had to return to England – the relationship with France got tense. The first advent to Henry’s court took place the same year. Spanish ambassadors were received in York; the performance “Chateau Vert” was organized, and Anne personified Perseverance there. Ladies, including Mary Boleyn and the king’s younger sister Mary, pleased the audience with a dance.

Day by day, the young woman was getting popular; everybody who met her was impressed with her sophisticated manners, charming voice, grace, energy, and love of life. Anne loved to be admired by men but never showed it – she did not want rumors about her illegal affairs, as it happened to Mary. She was said to have a romance with Francis I of France and some members of the French royal court. In England, Boleyn’s sister was a concubine of Henry VII.

Henry VIII and Anne Boleyn’s story is like an exciting love novel. The king and his future wife met in 1522 at some celebration. The man did not reveal his feelings until 1526; by that moment, he had been married to Catherine of Aragon for 17 years, but she did not give birth to an heir.

When Anne joined the English court, she got engaged to Henry Percy, but the marriage never took place because the lovers’ parents did not approve of that. Perhaps, the king himself participated in the marriage cancelation – he liked Boleyn too much to allow another man to have her. She lived in a family mansion for the next few years and became a lady-in-waiting for Catherine of Aragon in 1526; thus, it was the come-back to the royal circles.

From that time, Anne became an object of Henry’s passion: he showered her with expensive gifts and sent letters, offering to become his lover. Still, he faced rejection – Boleyn wanted no less than becoming his wife. The marriage to Catherine of Aragon was falling apart; the king cheated on the woman, discontented with no children, and she ignored that.

The passion made Henry VIII ask the Vatican to annihilate the union with Catherine. There was an inspection – the king insisted the marriage was illegal due to his family ties to Catherine. The woman hated the idea of a divorce, for it would mean the future life in a monastery and deprivation of privileges; the daughter Mary Tudor would become a bastard. Catherine persuaded her nephew to take the Pope hostage, and Henry VIII had to postpone the divorce issue.

Perhaps, this situation provoked the break-up with the Catholic church; the country was no longer dependent on the Pope’s decisions. According to some researchers, Anne Boleyn’s contribution to these changes is overestimated.

In 1531, Anne replaced Catherine in the castle; the lovers secretly married the next year, and the daughter Elizabeth was born soon. Henry was disappointed; only the new wife’s charm helped save the marriage and keep the baby safe.

The first daughter, Mary, was stripped off of her titles and privileges; she was named an illegal child and could no longer be seen as a candidate for the throne.

The newly-crowned queen threw herself into a luxurious life; the king pampered every whim of hers. The number of servants grew up to 250 people, and the English budget had many items for Anne: jewelry, new furniture, hats, dresses, and even horses. The English were not much happy about her wastage.

Politics became an integral part of Boleyn’s life: she helped her husband with many state matters and met with ambassadors and diplomats. The happiness did not last long, though: the next year after the daughter was born, Anne miscarried, and the spouses’ relationship was undermined. Henry began to think about a new divorce, and favorites appeared.

Boleyn did not hide her emotions and expressed her resentment; the spouses separated for a while. A new pregnancy ended with another miscarriage. Anne did not lose her hope to give birth to an heir, but the king had decided everything alone. Jane Seymour became a new favorite; she used to be Boleyn’s lady-in-waiting.

Anne attracted many men thanks to her energy and personal touch. The Earl of Northumberland Henry Percy was her first admirer; he served to the cardinal Wolsey. The young people fell in love with each other passionately and planned to marry.

However, Wolsey stood against this union – the cardinal treated the Boleyn family with disdain, and the king’s opinion was not favorable as well. Although Percy was fighting for the right to marry the one he loved, the attempts were futile. Anne was also dissatisfied by the situation – her freedom had been questioned.

There was another worshiper in the woman’s life – the poet Thomas Wyatt. The couple enjoyed talks about art and other things for a long time; the man was struck with Anne’s sensibility and passionate nature. Wyatt was married, and Boleyn did not think much about him – the position of a lover seemed something disgusting to her.

The inability to give birth to an heir put Anne’s life in danger; she was accused of treason. Crimes were published severely – death.

Many of Anne’s friends were named her lovers: Henry Norris, William Brereton, Francis Weston, Mark Smeaton, and even her brother George. All the men claimed that the rumors were the attempt to ruin Boleyn’s reputation, but enemies had another opinion.

Anne and George appeared in the court on May 15. Although she denied all the affairs, noblemen believed she was guilty of incest, infidelity, and treason. According to the law, Boleyn was supposed to be burned at the stake, but the former queen was condemned to decapitation.

An executor arrived from France; on May 19, 1536, she had to give back her minever mantle and stand on the scaffold. A lady-in-waiting blindfolded her, and the executor ended the woman’s life. The king’s former wife was buried in a nameless grave; a memorial tabled appeared only in 1876 in St. Peter’s chapel.

There is a legend that Anne Boleyn’s ghost appears in England from time to time. Some people view it as an opportunity to get familiar with the country as it is. Anne is presumably seen in various buildings; she has no permanent residence.

Boleyn used to be cheerful and vigorous; thus, she might have saved that through five centuries. Some natives and tourists claim they took photos of the ghost.