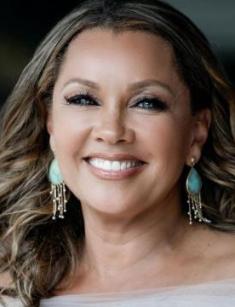 Vanessa Williams is an American actress, singer, and producer who became the first Miss America of the black origin. The woman endured racial discrimination and built a splendid career: several music albums, Broadway shows, and cinematography. Ugly Betty and Desperate Housewives are the most famous projects with the artist.

Vanessa Williams was born on March 18, 1963, in New York, into a family of a music teacher. The girl’s brother, Chris Williams, became an actor.

Young Vanessa learned how to play musical instruments; she was fond of singing and dreamed of becoming an artist. Following the dream, Williams entered College of Visual and Performing Arts, Department of Drama in Syracuse. However, she did not finish her studies: education was too expensive for the student.

Charming and pretty, Vanessa participated in various beauty pageants. She won a university competition and then became a Miss New York. The auditions for the Miss America pageant proved to be life-changing: the jury gave her the cherished victory in 1983.

It was not easy for the 20-year-old beauty to win. Public attacks caused much stress: people stood against Williams because of her color origin and ignored the fact that Vanessa’s home town was New York. Many unpleasant letters and phone calls, full of hatred, were sent to the winner of the contest.

More than that, a compromising photo was published: Williams participated in a “lesbian” scene which, in fact, was an experiment photo shoot for a makeup artist. Vanessa could no longer stand public humiliation and gave her award to the girl who placed second.

Despite the negative talks, rumors turned out to be beneficial: her popularity was growing, and the young woman started a career. She not only appeared on television but also made her singing ambitions fulfilled.

Young Vanessa was lucky to meet Ramon Hervey II: he became her husband and manager. The singer’s first album, The Right Stuff, came out four years after their marriage and became gold. Vanessa chose the rhythm-and-blues genre and hit the mark: fans gladly visited her shows, and the debuting disc was nominated for three Grammys.

The next album, The Comfort Zone, was presented in 1991. The song “Save the Best for Last” immediately brought it to the top positions in several countries; the album became platinum. The majority of singles were great hits. In 1994, the artist’s discography expanded: two collections of songs and three-time platinum album The Sweetest Days were released.

The song “Color of the Wind” was the soundtrack for the animated movie Pocahontas and gave Williams much fame, as well as three most famous show-business prizes: The Academy Awards, Grammy, and the Golden Globe. Thus, the young woman who could not pay for her education became a celebrity. She continued her music career with many concerts in the United States and Europe.

Soon, the successful artist decided to try herself as an actress. Vanessa debuted with secondary characters in series and then received invitations for lead parts.

In 1995, Williams collaborated with Mickey Rourke in Harley Davidson and the Marlboro Man; the same year was marked with Nothing Lasts Forever starring Brooke Shields. In 1996, people could see the actress in Eraser; Arnold Schwarzenegger became her stage partner. Vanessa also recorded the soundtrack for this project.

The next year, Williams participated in the musical Soul Food; 1998 brought the role of a choreographer in Dance with Me. The woman’s attractiveness and charm helped her receive many offers: Light It Up, Don Quixote, and Johnson Family Vacation. She did not ignore series and appeared in Ugly Betty and Desperate Housewives. In 2013, the drama Temptation: Confessions of a Marriage Counselor was premiered.

Cinematography was not enough for restless Williams: at the age of 31, she decided to try herself on the theater stage and personified the main character in Broadway’s Kiss of the Spider Woman. The actress’s drama talent was appreciated: she was nominated for the Tony Awards.

Vanessa also voiced shows and animated movies. Besides, the musician became the first black ambassador of L’Orеal; many black fans celebrated this achievement.

The woman’s first husband, Ramon Hervey II, was 13 years older than her. Three kids were born in this family; the first one appeared when the artist was 24. She successfully combined tours, album recording, and social events with child care.

The couple spent 15 years together and then realized their marriage reached its limit; the divorce followed.

Vanessa did not stay alone for a long time: she started dating the former NBA basketball player, Rick Fox. They married in 1999; the husband was six years younger than his wife. The 37-year-old actress gave birth to a daughter, but it did not prevent her from breaking up with Fox when he cheated on her.

In 2015, the celebrity married the financier Jim Skrip; they repeated the wedding ceremony the next year and invited their nearest and dearest.

Today, Vanessa Williams continues to perform on the stage; she also produces several projects. In April 2019, the artist visited the annual Basket Ball in Syracuse; Jim and Julia Boeheim’s fund organized the event.

Vanessa is actively engaged in charity work and helps provide children and teenagers in need with financial support. On April 24, 2019, she gave a concert in Schomburg and sent all the money to black and Hispanic students studying at Syracuse University’s College. Such scholarships were introduced in 1987 and aimed at improving students’ education no matter what subject they studied. The actress expressed her hope that young people would have the opportunity to fulfill their dreams with those scholarships.

Vanessa keeps her fans informed with social networks: the actress posts pictures and videos on Instagram and shares new ideas, old photo shoots, social events, and daily life moments. She does not hesitate to appear in a swimsuit or without makeup: the woman’s attitude toward her age and body is relaxed, even though she does not look like in the series that made her famous.