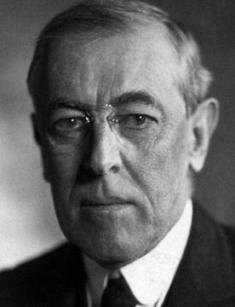 In the early twentieth century, America became the most developed country in the world, thanks mainly to the 28th President Woodrow Wilson. Reforms in the economy and foreign trade, the preservation of U.S. neutrality in World War I, the project of the League of Nations, and the contribution to the Treaty of Versailles turned Wilson into a legend of world politics.

A century before George W. Bush and Bill Clinton, President Wilson undertook the problem of the world's military conflicts and established peaceful relations between people of different nations. The efforts ended with a Nobel peace prize and a stroke.

The 28th President of America was born in Virginia, in independent Staunton. Thomas Woodrow had mixed Irish and Scottish ancestry. His paternal grandparents had come to America from County Tyrone in Northern Ireland.

The grandfather of the future President, a supporter of the Quaker movement and the European Enlightenment, settled in Ohio, where he published a protectionist newspaper, which opposed slavery. His son Joseph did not follow in the footsteps of his parents and became a Presbyterian theologian. And he bought slaves, which angered his father, an ardent fighter against slavery. Joseph Wilson married a native of British Cumbria, Janet Woodrow, whose ancestors were Scots.

Wilson opened a hospital at the Church where wounded soldiers were treated: Janet and Joseph were supporters of the Confederacy. Wilson soon became an army chaplain and went to the front. At first little Woodrow Wilson found it difficult to study: due to dyslexia, the boy could not read until he was 12 years old. But having mastered shorthand, he overcame the barrier and made up for a lost time. Wilson studied at home for the first years, then attended school in August.

He followed in his father's footsteps and went to College in North Carolina, where future Presbyterian priests were trained. In the same year, 1873, Wilson became a member of the Presbyterian Church and remained so until his death. In College, Woodrow fell ill and left after his freshman year, settling in his parents ' home in Wilmington.

A year later, in 1875, the future President became a student at Princeton, graduating with brilliance in 1879. As a student, Woodrow Wilson became interested in history and political science and organized a debating society. After graduating from Princeton University, Wilson received a law degree from the University of Virginia. Still, a year later, in 1880, due to illness, he left the University and studied at home.

After two years of homeschooling, the future politician took exams at the University of Virginia and received a law degree. Wilson partnered with a former classmate and began practicing law, but after a year became disillusioned and left the business: Woodrow was interested in politics.

The path to power for Woodrow Wilson began in the spring of 1883 when he became a graduate student at Johns Hopkins University and three years later became a Ph.D. In early 1885, the first book of the politician was published, in which he proposed reform of the American Executive branch by strengthening the President. For this work, the University awarded Wilson a prize.

In 1886, after conferring his doctorate, the young scholar taught history at the women's College and University in Connecticut. In 1890, Woodrow Wilson was invited to Princeton, where he taught students political science. After two years, he wrote a second work, History of the American People, and became the rector of the University, remaining in office until 1910.

In November 1910, a new Chapter of Woodrow Wilson's political biography began – he was elected Governor of New Jersey. While in office, Wilson demonstrated independence and will by refusing to follow the party line. He passed a number of universal laws and became famous outside the state.

The democratic party nominated Governor Woodrow Wilson. His competitors were William Taft and Theodore Roosevelt, whose rivalry for the Republican vote caused Wilson to win the race in 1913. Woodrow Wilson became the only American President with a doctorate and the first native of the South.

During his first term, Wilson changed the principles of the state structure of the country, creating the Federal Reserve. The only American money was "Federal Reserve Note." Despite his modest political practice (two years in the Governor's chair), he acted decisively, implementing the election program. In the shortest possible time, he formed the Council of Ministers, appointing William McAdoo Secretary of State. The Ministry of Food was headed by Herbert Hoover, and the military - Henry L. Stimson.

The new President of the United States for the first years of the government implemented the conceived program of economic reforms. First of all, he lowered customs barriers to foreign trade and began to implement tax, antitrust, and banking reforms.

In 1916, Woodrow Wilson was elected to the presidency for a second time. In addition to successful economic reforms, he was credited with keeping the United States from being drawn into the war. Wilson demonstrated peacefulness and constructivism to citizens, not criticizing the main rival Charles Hughes, but focusing on what had been achieved during the first term. But Wilson's advantage over Hughes was minimal; the victory was not easy.

In his second term (1917 to 1921), Woodrow Wilson concentrated on the outbreak of the First World War a month after the election.

The governance of Woodrow Wilson and Theodore Roosevelt echoed in many aspects. Both presidents improved working conditions for people. Wilson banned the employment of children and reduced the working day for adults to 8 hours. Farmers breathed a sigh of relief after a series of social transformations. He started fighting discrimination against women.

Woodrow Wilson was one of the founders of the theory of government-bureaucracy. He considered a single management center the necessary prerequisite for an effective management system. According to Wilson, politics and government must be separated, and the modernization of civilization required effective administration and professional employees.

In 1919, the 28th President of the United States campaigned for the ratification of the League of Nations agreement. Travel and nervous strain had taken away his strength and undermined his already weak health. In October, Woodrow Wilson suffered a stroke, which resulted in the blindness of the left eye and paralysis of the left side of the body. For six months, the President found himself in a wheelchair, later walking with a cane.

Woodrow Wilson was called a pacifist President who advocated a policy of good neighborliness and non-interference in the affairs of other countries. He disliked the system of the "big club" and the role of international policeman chosen for America by Roosevelt. The 28th President of the United States established good-neighborly relations with Latin America and Western Europe. But Wilson's pacifist sentiments melted away because of the strained relations with Mexico in 1915, when border clashes escalated into two days of fighting at the port of Vera Cruz, claiming the lives of hundreds of soldiers and sailors.

In the spring of 1916, Mexican rebel leader Pancho Villa and a band of criminals invaded the U.S. state of New Mexico, causing damage to farmers. The Americans responded by conducting a military operation led by General John J. Pershing. In 1917, the General's troops entered Europe, violating Wilson's declared right of Nations to self-determination.

In early 1918, Woodrow Wilson proclaimed a program of peace, which he formulated in 14 paragraphs designed to resolve territorial disputes, ensure free trade and establish a peacekeeping organization. But Congress failed the agreement on the League of Nations, and in Europe, only 4 of the 14 theses were implemented.

The economic problems that followed the war, the devastation of farmers, the unrest in Chicago, the breakdown of relations with former political allies became an obstacle to Wilson's third term as President. This time, Democrats did not support him.

Wilson's first love left a mark in the biography of the 28th President of the United States. When cousin Henrietta Woodrow refused student Thomas Wilson, citing close blood relations, he took her surname as a middle name, which eventually became the first one.

A new love for Ellen Axson healed a broken heart. The couple first met when Thomas was six, and Ellen was 2. Woodrow Wilson remembered the charming girl with dimples 20 years later. The young man arranged a match with Ellen's father, the rector of the Presbyterian Church, and went to Atlanta. Every day the bride received letters from her future husband, keeping all 1400 messages.

Ellen Wilson became both the President's wife and associate. The woman gave her husband three daughters, learned German to follow the novelties of literature and art, edited Wilson's speeches. When Woodrow had a stroke, his wife became a secret adviser to the President.

Ellen died in August 1914. Dying of Bright's disease, she asked the family doctor to look after her husband. The wife blessed her husband for a second marriage, asking for one thing, to find a worthy woman.

The second time, Woodrow Wilson married in late 1915. There were no children in his marriage to Edith Bolling Galt. Woodrow Wilson is known for his love of cars. The hobby led to the financing of the construction of public roads.

In 1921, the 28th President left the White House and settled with his wife in Washington's Embassy district. He suffered hard setbacks in the creation of the League of Nations, believed that he had deceived the Americans, and unnecessarily dragged the United States into the First World War.

Wilson died in February 1924. He was buried in Washington Cathedral.

Is there any man here or any woman, let me say is there any child here, who does not know that the seed of war in the modern world is industrial and commercial rivalry?

If you want to make enemies, try to change something.

In the Lord's Prayer, the first petition is for daily bread. No one can worship God or love his neighbor on an empty stomach.

Freedom exists only where people take care of the government.

Only free peoples can hold their purpose and their honor steady to a common end and prefer the interests of humankind to any narrow interest of their own.