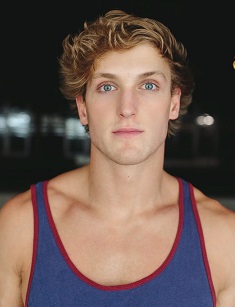 Logan Alexander Paul is an American social media celebrity. He has accounts on YouTube, Snapchat, Instagram, Twitter, and Facebook. He gained his popularity by vines – short funny videos that were uploaded on the platform Vine that is closed at present.

Logan lives in Los Angeles, California, U.S. and continues shooting his great vlogs and short videos, mostly, for YouTube, but he is an active user of every social network.

Logan Paul was born in Ohio, where he was raised with his brother, Jake Joseph who is also a social media celebrity now. Brothers have English, Irish, German-Jewish, Scottish, and Welsh descents.

At the age of ten Logan created a YouTube channel together with his brother. They used to make some funny challenges, for instance, Naked challenge (guys really posted their nude videos where they’re running in the house full of their group).

Paul went to the Westlake High School, where he was fond of football and even was a part of the Ohio High School Athletic Association. Then, he studied at Ohio University at the program Industrial Engineering and in 2014 he dropped out because he wanted to develop his career as a full-time internet entertainer.

Logan’s career has started with Youtube and Vine. Then, by spring 2014 he got 105 000 followers on Twitter, 361 000 Instagram followers, 31 000 likes on his Facebook and 150 000 followers on the YouTube channel. In 2015 he was named the 10th most influential person on Vine, where he used to post short videos and earn a lot of thousands of dollars by advertising revenue. Logan has two Youtube channels: TheOfficialLoganPaul (5.8 million subscribers) with short comedy videos and Logan Paul Vlogs (18.8 million subscribers) with his daily vlog.

Since the 2015 year, Paul has started appearing in some movies. Mostly, he gained recognition by starring in television series, including Law & Order: Special Victims Unit and Weird Loners. Logan was supposed to play Zane in the film, Baywatch (2017), but, eventually, he got cut from this work. Paul has also written the screenplay for the comedy for adults, Airplane Mode. The date of release hasn’t been announced yet.

In 2017, Logan released his new song and a music video named No Handlebars, based on the sample of the single Handlebars created by the band Flobots. This Paul’s work was very criticized, because it demonstrated the sexual objectification of women and disrespectful attitude, especially in the video scene when Logan was sitting on three women like on a bicycle. Jamie Laurie, the member of Flobots, also commented this single for its lyrical content and for the illegal use of Flobots’ sample. Later, Jamie even released the single Handle Your Bars that made fun of Logan. However, Paul didn’t make any apology or any other commentary, but he removed the single from YouTube.

Also, that year Paul and his group wanted to create the third part of Tokyo Adventures series, their Japan vlog video, and to camp in the woods in Japan, but it didn’t go well. Guys found a body of a dead man who committed suicide in the woods by hanging near the piedmont of Mount Fuji in Japan. Paul decided to cancel their plans and to let the authorities know. He also filmed this moment, and the video got 6.3 million views for less than one day. The fact of uploading this kind of video got criticized by lots of famous personalities; Paul was blamed by the YouTube community because of the lack of respect to the dead man's relatives. There were some petitions created for convincing YouTube to delete Logan's channel, the most huge petition in 2018 got more than 500 000 signatures. Then, Paul removed the video himself and posted an apology on Twitter saying that his behavior was irresponsible and silly and that he didn’t want to scoff at the victim.

"It's taken us a long time to respond, but we've been listening to everything you've been saying. We know that the actions of one creator can affect the entire community, so we'll have more to share soon on steps we're taking to ensure a video like this is never circulated again."

The next day after that message YouTube removed Logan’s channels from the advertising program, Google Preferred. Logan was also cut from the New World Order (the sequel of The Thinning) and Foursome (YouTube Red series).

After all these developments, in a month, Logan uploaded his first video to the Logan Paul Vlogs. It was dedicated to the issue of the suicide; Paul spoke about suicide prevention and had interviews with Kevin Hines, who jumped off the Golden Gate Bridge in 2000, and John Draper, the head of the National Suicide Prevention Lifeline. Besides, Paul made a donation of $1 million to suicide prevention agencies. That caused some positive feedback. Then, after two weeks, Logan came back to his daily vlogs on YouTube.

There was even a game created by Simo Mediator that was called Logan Paul: Suicide Forest Run. It was deleted from The Google Play Store rather soon.

After all this controversy about the suicide video, Maverick Apparel, a brand for juniors and kids, threatened Paul with legal action for giving his merch a resembling name ("Maverick by Logan Paul"), because shoppers started confusing Maverick Apparel’s line with Paul's, which led to the decrease of sales. Speaking about clothing, Logan has his own online shop, where he purchases T-shirts, hoodies, and accessories.

We continue raising the topic of controversy connected to Logan Paul. At the beginning of the 2019 year, he announced on the Impaulsive, his podcast:

"What is it, male-only March? We're gonna attempt to go gay for just one month."

This statement was really criticized for his frivolity. The LGBT organization GLAAD answered to Logan’s announcement on Twitter: "That's not how it works, Logan Paul."

After that, Paul apologized and offered to meet on his podcast to discuss everything. Later, this offer was delayed because Logan was in recovery after his tonsils were removed. The reliability of Logan’s words got called into question.

Later that year, Paul released a mockumentary, in which he had interviewed Modern flat Earth societies and made a speech at the 2018 Flat Earth International Conference in Denver. Logan’s "documentary" would be best described as a sketch-comedy than anything serious.

Paul also likes boxing on an amateur level. At the beginning of the 2018 year, after his match with Joe Weller, British YouTube celebrity Olajide William Olatunji (also known as KSI) challenged both Pauls, Logan, and Jake to a game. In August 2018, there was a boxing match: Logan Paul vs. KSI and Jake Paul vs. Deji, Olajide’s brother. Their fight ended in a draw.

Since October 2015, Paul has been living in the apartment complex in Hollywood, California, where other internet personalities such as Amanda Cerny, Juanpa Zurita, Evan Eckenrode have been living too. Logan’s roommates were Evan Eckenrode and Mark Dohner. The fact that various internet celebrities lived in one place created the opportunity for them to make some videos all together. Then, in two years, Eckenrode and Paul got evicted from their apartment and moved to the house in Encino, California.

Logan has some issues connected to his health. In 2017, on the talk show, Jimmy Kimmel Live!, he informed the audience that there was a lack of 15% of his right testicle. This problem occurred after one of his tricks when he had landed on the chair, which had damaged his testicle. Also, he has color vision deficiency and some brain damage after high school.

Speaking about Paul's love life, for now, he isn't dating anyone. In 2017, he started dating an actress, Chloe Bennet, but after a year of relationships they broke up.

What about his net worth, it's estimated at $19 million.

In 2017 next singles were released:

The Song of the Summer (with Seven Bucks and Desiigner)

Besides, Paul has been shot in some music videos; almost all of these videos Logan has directed by himself:

Logan has been nominated for eleven awards, and in 2017 he won two Teen Choice Awards for Male Web Star and Comedy Web Star.