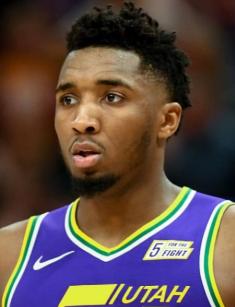 The native of Elmsford, Donovan Mitchell started a basketball career in NBA in 2017, as a rookie of Utah Jazz. He was drafted by Denver Nuggets, who later traded him. In his debut season, Donovan was recognized as the best rookie of the month four months in a row. Also, in 2018 he became the Slam Dunk Contest’s winner. Donovan represents the national team of the USA. He plays at a Shooting guard position, showing career stats 22.1 points and 3.9 rebounds per game (as for August 2019). He has a net worth of $2.6 million, including all of his properties and earnings. His annual average salary is about $3.1 million.

Donovan is from Elmsford. It is a village in Westchester County, NY. He was born to his parents on September 7, 1996. Mitchell rose up along with his beloved sister, named Jordan. Donovan’s father was an important figure in the life of USA baseball. He held a position in the structure of MLB club. So, Donovan used to the attention of journalists as a kid.

He started as a standout pitcher, but at the age of13, Donovan decided to drop baseball and focus on basketball as a sophomore in high school. He played with two AAU programs in NYC — the Riverside Hawks and The City. He didn’t get referenced as a New York product, however, because he did almost all of his schooling at Connecticut and New Hampshire prep schools.

Donovan became prep school national champion twice and attracted the attention of college coaches. He was considered to be one of the most impressive prospects during summer AAU play. Then rated the No. 101 player in the country by Rivals.com, chose the Louisville Cardinals over Villanova, Florida State, Boston College, and Providence, among offers from several other schools. He made his decision after visiting Louisville.

Donovan didn’t become the starting player in his freshman season, appeared only in five games. He scored 7.5 points per game. Next season he achieved the following stats: 15.6 points, 4.9 rebounds, 2.7 assists and 2.1 steals on average per game. He shot about 46 percent from the field, 35 percent from three-point range and 80.6 percent from the free-throw line. He earned first-team All-ACC honors for his efforts.

The After a workout with then-Clippers guard Chris Paul, the nine-time All-Star told the Louisville star that he should declare for the NBA draft. Soon, Donovan Mitchell announced that he would enter the NBA draft pool but not hire an agent, leaving open the possibility of returning to U of L for his junior year.

Before the Draft, several analysts noted that Mitchell’s elite athleticism, length, and game gave him a passing resemblance to a young Dwyane Wade. It didn’t mean he had that same ceiling, but his talent was worth a pick at the end of the lottery or soon after.

Donovan entered the NBA as the No.13 of 2017 NBA Draft. He was selected by Nuggets, which traded him to Utah Jazz the same night. The sides signed a two-year $5.73 million contract on July 5, 2017. The rookie had a very strong showing in Utah Summer League. He opened it by scoring 23 points in 25 minutes against the Spurs. Mitchell knocked down 10 of his 17 shots, including three of six from beyond the arc, and chipped in five assists, three steals, and two boards.

In three games, Mitchell averaged 15.3 points. Just weeks after hearing his name called in the lottery of the NBA Draft, former Cardinal agreed to sign a multi-year shoe Adidas contract, joined James Harden, Kristaps Porzingis, Damian Lillard, Joel Embiid and a few other high profile NBA players as an Adidas-sponsored athlete. It was not normal for a late lottery to pick to sign a shoe deal before he ever played an NBA game.

Already in December 2017, Donovan entered his name in the NBA record book as a rookie, who could score more than 40 points in one game. He was first in the franchise’s history to make it. By January 2018, Mitchell spent 19 games, in which he scored 20 or more points. Fans adored Mitchell’s high-flying dunks. The acrobatic throw-downs had absolutely become the norm for him.

His dunks helped Donovan to become a participant in the 2018 NBA All-Star Weekend Dunk Contest. And he won it at the Staples Center in Los Angeles. Though he might seem slightly undersized for a high-flying dunk champion, he showed more than enough athleticism to compete with the league’s best. He completed one dunk by jumping over Kevin Hart, Hart's son and his own sister.

Mitchell edged Nance Jr., 98-96, sealing his victory with a close approximation of the 360-degree spin dunk that Vince Carter used to win the 2000 contest. Before making his winning dunk, Mitchell peeled off his Jazz jersey to reveal a vintage Carter jersey from the Toronto Raptors.

The great end to the rookie season of Mitchell was his outstanding playoffs. He appeared in 11 games, averaging 24.4 points. The season 2018-19 became the continuation of Mitchell’s rookie show. He didn’t take part in the Contest title’s defense but was the contender to All-Star roster. In his second NBA season, Donovan scored 23.8 points, adding 4.1 rebounds, and 4.2 assists.

In 2019, Mitchell appeared in the commercial for the upcoming "Spider-Man: Far From Home" movie. In the video, Tom Holland, who portrayed the arachnid superhero in the movie, mixed up suitcases with Mitchell, whose nickname was "Spida." Instead of his suit, Holland received a pair of basketball shoes. Meanwhile, Mitchell was enjoying shooting webs out of the suit. "Can I just have ten more minutes?" Mitchell asked when Holland confronted him about taking the suit.

Soon, the movie premiere became a place to showcase original clothes. Mitchell appeared there in an outfit inspired by the famous web-slinger. He opted for his very own Adidas x Marvel signature sneaker. The same evening, another movie star Zendaya wore a red and black Armani Privé gown, which looked similar to Spider-Man’s upgraded suit, seen in the new movie—think black instead of royal blue.

As for Mitchell’s relationships, he is dating his longtime girlfriend, Deja Lighty. He is a very active Twitter and Instagram user. Donovan Mitchell is the owner of an online store, selling authentic jerseys, clothing, and on-field apparel.

Also, in 2019 the high flying dunker was featured by the Salt Lake City Stars with his own signature bobblehead that had him sporting a Darrell Griffith jersey from the Dunk Contest, the Dunk Contest Trophy, and a Spider-Man web holding the ball. Mitchell already has a bridge in Utah named after him.

In a March ceremony, Mitchell had a bridge two blocks away from Vivint Smart Home Arena — the home of the Jazz — named in his honor. He was praised by community leaders for “endearing himself to the Utah community” before speaking to a collection of a few hundred fans.