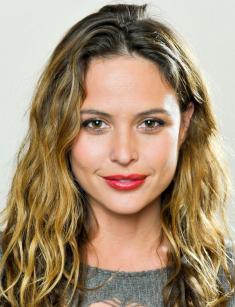 Josie Maran is a model and an actress, known to most women as the girl has long been the advertising face of the cosmetic brand Maybelline. Maran is one of those, who implements ambitions, so Josie's range of interests was not limited to participation in photo shoots. The model tried herself as a film actress, a beauty blogger and a creator of the author's cosmetic line. Josie Maran even had time to try herself in the role of a soloist of music groups.

Josie Maran was born on May 8, 1978, in the small American town of Menlo Park, located in the state of California. The real name of the top model is Johanna Selhorst Maran. The girl's father has Russian-Jewish roots and her mother is of German-French origin. The girl was sent to an all-girls Castilleja School, where Josie got a general education. When Maran was 12 years old, a representative of a modeling agency noticed her at a local restaurant and made the first job offer to the future model.

Her parents were against such an early career start and wanted Josie graduated from high school with honors but the girl could already picture herself famous. Maran found a way out of the situation. She did not drop out of school and worked in her spare time. At the age of17, she signed her first contract, becoming an employee of the large agency Elite Model. After three years, her photo first appeared on the cover of the glossy fashion magazine Glamour. The first success was consolidated by cooperation with the brand Guess.

Ambition and a tendency to continuous improvement of skills quickly moved the job of the model. Having achieved contracts with famous brands, the girl did not stop there. She began to receive offers from popular brands. The most profitable was the invitation to the cosmetic company Maybelline. The right decision led to long-term cooperation of 10 years. Attractiveness and efficiency of Josie were praised by the representatives of other brands; among them are Victoria's Secret, Gap, Ralph Lauren.

Photos of the model in a swimsuit appeared on the covers of sports magazines Sports Illustrated, Shape, Fitness and Seventeen. Maran did not focus only on the profession and was willingly engaged in self-development, devoting time to dance, music and public speaking. American models often have the opportunity to implement in other areas due to their appearance. So, talented Josie Maran decided to try herself as a vocalist.

She managed to act as a soloist in the groups Hollywood 2000 and Darling during the year. The model played the violin and performed vocal roles in the first group and was in a duet with Nicole Richie in the second group. The girl coped with the new role but she got tired of the concert activity.

Photos of Josie continued to be published in such editions as ELLE, Vogue, Esquire, Marie Claire and others. But the girl decided to add new experiments to her creative biography and try herself at the cinema. In 2002, she made her debut in short projects Swatters and The Mallory Effect.

In 2004, Maran was lucky to become a member of the movie The Aviator, directed by Martin Scorsese. The episodic role brought the aspiring actress the opportunity to work on the same site with Leonardo DiCaprio, Alec Baldwin, Jude Law, Kate Beckinsale and other Hollywood stars.

Josie began to receive exciting offers from producers. The next movie with her participation was Little Black Book and then Van Helsing, in which Maran played Marishka. This role turned out to be a big success for the artist. She turned into the bride of a Count Dracula. Since that time, Maran is often called among the sexiest vampire movie. This list also contains Silvia Colloca and Elena Anaya. Hugh Jackman, Alun Armstrong and other famous actors also starred in the film.

2005 brought Josie the role in the short film The Confession with Wentworth Miller and she appeared in the movie The Gravedancers in 2006. In the same period, the image of the actress was chosen to create a character in the computer game called Need for Speed: Most Wanted. The heroine Josie, Mia, acted like a girlfriend of the main character. In 2008, the creators of the game "Midnight Club: Los Angeles" suggested Maran a similar type of cooperation.

The actress and model is often invited to participate in a TV show. She was the heroine of the show Strictly Come Dancing, where she performed together with Alec Mazo. According to the results of the audience voting, the model and her partner dropped out of the competition. Josie was a guest of America’s Next Top Model, The Howard Stern Show and other programs. In 2014, the actress's filmography was supplemented with the role in the film Where the Sun Kisses the Ocean.

One of the photo shoots was a turning point in the life of the model because she met her future husband, photographer Ali Alborzi. In 2006, they had a daughter Rumi Joon and her sister Indi Joon was born in 2012. The personal life of Josie Maran failed and she and her husband decided to part.

In some interviews, the model admitted that she was disappointed in men and wants to bring up children on her own. Her main dream is to move to Hawaii. According to Maran, the conditions are most suitable for living with family in this region.

In September 2018, Josie married the director David Belle. Their acquaintance took place spontaneously: the future spouses met at a party, on the farm of Maran in Pennsylvania. The wedding took place in the early autumn morning outdoors, in a narrow circle of friends and relatives.

In 2007, Josie Maran launched her cosmetic line. According to the creator, she began to be interested in decorative and eco-cosmetics, when she was a model. Josie Maran has a net worth of $10 million

The girl often talked with makeup artists and asked questions on topics of interest. When she found out that many brands do not care about environmental products, Josie decided to release the author's line of Josie Maran Cosmetics. The brand was in demand among customers Sephora and Barneys New York. So, Maran gained success as a businesswoman.

In 2019, the cosmetic line releases new products. The main advantage of the product is the naturalness of components. Josie also acts as a beauty blogger, promoting her creation and telling about the secrets of skin care for women of all ages.

Maran shows examples of the use of decorative cosmetics, promoting an environmentally friendly approach to life in general. Representatives of the brand share about any nuances of the use of products, developed by the model, on social networks "Instagram" and "Facebook."

Although Josie left her career as an artist in the past, she often appears at public events and keeps figure through sport and yoga. Now Maran is 67 feet (172 cm) tall and she weighs 123 lbs (56 kg).