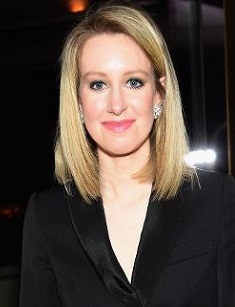 Elizabeth Holmes, an American businesswoman, is one of the most successful women in the world. At the age of 31, she created a large company Theranos which was to develop an innovative, unique method of blood drive and blood test. The woman became a millionaire; the company's net worth was evaluated of 4 billion Dollars. But in several years the world became a witness of big scandals related to the firm, and Theranos' income descended to 0.

So, how did Elizabeth Holmes come to her success?

Elizabeth Anne Holmes was born on February 3, 1984, in Washington, USA. Her father, Christian Rasmus Holmes IV, was a politician dealing with overseas aid.

Elizabeth's mother worked in the USA Congress. Besides, Elizabeth has a brother who was later responsible for production management in Theranos.

Interestingly, the majority of men in their family has the name Kristian – Elizabeth's father, brother, grandfather, great-granduncle.

In her childhood, Elizabeth had an unordinary view of her future life. Often she said about her plans to create something which can change the world and improve people's lives.

Elizabeth's parents moved to Houston where her father got a job at a machine-building company. There the girl entered the St. John's School. Being a teenager, Elizabeth with her brother studied in China where managed to learn Mandarin Chinese. At that time the girl became interested in computer technologies and created the C++ compiler which later was sold to a local University.

Elizabeth found a new passion – medicine – after she read her great-granduncle's biography. During World War II, he was an outstanding surgeon and investigator, and a dean of the University of Cincinnati Medical College. His history and belief provoked Elizabeth's interest in medicine and chemistry.

However, later it was revealed that the girl is afraid of blood and needles and she had to stop this hobby. At the same time, future businesswoman started thinking about the project which would facilitate the process of the blood drive. However, that time her ideas were not implemented and stayed only in her mind.

Due to good recommendations from school and perfect grades, Holmes managed to enter one of the best universities in the United States of America – Stanford University. She studied the faculty of “Chemical engineering.”

Being a hard-working, diligent student, Elizabeth got a $ 3000 grant for scientific research. She got on well with the dean and other professors and succeeded to persuade them to use her prize in the University's laboratory. Earlier only outstanding seniors were allowed to work in the laboratory. There they studied blood properties and the methods of blood analysis.

Pretty soon Elizabeth was lucky to win a competition and go for an internship to Singapore. There she worked at the Genome Institute. She with colleagues made some research on detection the coronavirus SARS in people's blood. During the internship, Elizabeth learned a lot, was inspired to working, but most importantly her plans began taking a precise shape.

Having returned to the home, she passed an enormous amount of time researching and analyzing. She planned to apply for the patent on her new invention – a little innovative gadget which can monitor blood change. It would help control a medication dose individually and cure a sick person fastly.

Her patented gadget was a special band-aid which is to be fixed to the human body. The band-aid has a chip inside which show a health status of its owner to a doctor. A doctor changes medication doses and sees improvements.

In fact, at the age of 19, Elizabeth Holmes invented the equivalent of modern biorobots.

Being a sophomore, Holmes understood that she does not want to waste her time studying and dropped out of the University. She did it in order to find investors and start her outfit where specialists in medicine would create progressive technologies.

Parents supported her and allowed her to use the money which they had for her studying. It was the beginning of the Theranos company.

It was clear that Elizabeth needed to find significant investment. She was ready for communicating with a lot of people and getting a refusal.

The first person Holmes talked to was the Stanford professor who had always supported her. Earlier he had invested into start-ups, but their founders were much older than 21-year-old Elizabeth. However, he said to her “Yes” and added that only 1-2 persons like Elizabeth are born in one generation.

Initially, this new company was called «Real-Time Cures.» Later, following the advice, the woman changed its name. The reason for it was that the word “Cures” usually evoked a negative reaction, that's why the firm was renamed into Theranos. It is the mix of words “therapy” and “diagnosis.”

By 2005, the entrepreneur had opened an office, attracted $6 million investment and created a big team of medics, engineers, managers. She thought that everyone should mind his own business and entrusted the managers with all the questions (marketing, recruitment, financing). She plunged into researching.

All the information about the company was a substantial secret cause Holmes was afraid of competitors. The majority of employers signed the document of commercial confidentiality. Even the investors didn't know much about the firm. The company has even had some judicial proceedings against 3 employers accused of the disclosure of secret information.

Later Holmes understood that full pharmaceutical researching is impossible without a budget increase. The marketing department, professional workers, have done their job – the Theranos company has become one of the most demanded in medicine.

Two years later the firm signed contracts with the largest producers of medicinal preparations in the USA. The potential investors have seen how severe Theranos is and, as a result, the company attracted more than $92 million investments.

By 2013, the Theranos had been evaluated as the world giant of biotechnology. Gradually, the company started to become more public, to buy the patent on various inventions without any secret.

Theranos was allowed to work in every state. In so doing, the staff was only 500 people. The total value of the company was $9 billion. Elizabeth owned more than 50 percent of the firm.

Then they started working hard on gadgets tasting.

Usually, doctors took blood from the vein which can be painful and harmful for an organism.

Elizabeth invented the technology allowing to make much more tests using only a little drop of blood. The process of analysis is a kept secret.

According to Theranos' research, more than 40% of people do not give blood because they are afraid of needle and pain. That is why it is impossible to reveal serious diseases in the early stages. Elizabeth's new gadget resolved the problem.

The popularity increase of Theranos happened in 1 year when they started communicating with media. But gadget's characteristics were kept secret. Criticism and skepticism were inevitable.

After signing several contracts, Theranos opened posts of giving blood across the country. There all desiring people could get the detailed blood analysis.

Theranos' problem started when the Wall Street Journal newspaper wrote an article where the former firm's workers said that all the Therano's tests are made on conventional equipment. And a drop of blood, they claimed, are diluted with special mixtures. Holmes refused from commenting it.

The second severe Theranos' scandal happened soon. After the firm's revision, the inspectors prohibited Theranos the use of the capsule. Theranos had to give up the technology for some time.

In Holmes' opinion, the reason for these problems was incorrect management and she started firing the board and employers. Only medical experts left there and served as SEO, managers, etc.

Inspectors started verifying the company more often, found the serious violation which could have provoked health problems of patients. Moreover, inspectors were not sure about new technology's security. Elizabeth was removed from the firm' s management, the work inside was stopped.

Holmes was romantically involved with Ramesh “Sunny” Balwani, a Pakistani-born Silicon Valley technology entrepreneur. She met him in 2002 at the age of 18, while still in school; he was 19 years elder than her and married to another woman at the time. Sunny divorced his wife in 2002, became romantically involved with Holmes in 2003, about the same time Holmes dropped out of college, and the couple moved into an apartment around 2005.

Although Balwani did not officially join the company until 2009, as Chief Operating Officer, he was advising Holmes behind the scenes before then. Holmes and Balwani ran the company jointly in a corporate culture of "secrecy and fear." He left Theranos in 2016 in the wake of investigations. The circumstances of his departure are unclear; Holmes states that she fired him, but Balwani states he left of his own accord.