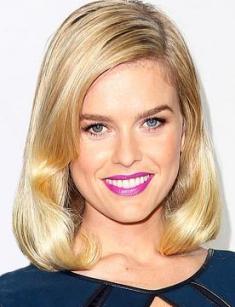 Millions of people love Alice Eve for her movies and theater roles. The actress stands out for her heterochromia: she views it as an advantage, not a flaw. Few people have eyes with different colors. Alice’s right eye is green, and the left one is blue.

The artist’s career has been bright and fruitful. Her life has been related to acting since her childhood, and the young woman’s choice was predetermined.

Alice Eve was born into the family of actors on February 6, 1982. She spent her childhood and adolescence in London and grew up with two younger brothers, Jack and George. The mother, Sharon Maughan, and the father, Trevor Eve, did not prevent their daughter from following in their footsteps.

Young Alice went to Hampshire and London schools and continued her education in Oxford; she also taught English there for a short while.

The woman studied drama at Beverly Hills Playhouse in Los Angeles. The student’s talent was appreciated: the plays with her were always successful. Eve did not limit her with university performances, though: she participated in Trevor Nunn’s and Tom Stoppard’s plays as well and then conquered the hearts of the Broadway’s audience. In 2007, she was nominated for the Theatregoers Choice Awards for Best Supporting Actress.

The 22-year-old artist debuted in the biopic about Stephen Hawking; her character was secondary yet distinctive. From that moment, the actress had many roles and kept earning her international recognition.

2010 brought the premiere of She’s Out of My League. It was not an easy task for Alice to play the perfect beauty Molly McCleish, but this role was one of the most significant parts in her career. As the story runs, the arrogant character rejects Kirk Kettner’s (Jay Baruchel) courtship. Alice’s parents played her screen parents.

The actress’s career was improving, and new offers followed. The next year, she joined the cast of the romantic comedy The Decoy Bride and played the blonde Lara Tyler who could not marry because of the intrusive paparazzi.

2014 was marked with the melodrama Before We Go. Alice collaborated with Chris Evans, who also directed the project. He gave Eve the lead part because of her British roots: initially, her character was supposed to have the British accent. However, she played the American in the end.

Rumors had it the artist was going to participate in Marvel’s Iron Fist; the company confirmed that later. The executive producer Jeph Loeb gladly accepted the Star Trek celebrity to the new project: he admired her talent. Eve personified Typhoid Mary.

The actress had been planning to work on a Marvel project before: she could have personified Peggy Carter in Captain America: The First Avenger (2011), but the role was given to Hayley Atwell.

In 2017, the thriller The Stolen was premiered; it proved to be immensely popular.

Although Alice Eve has been busy with many projects, she has managed to build a harmonious relationship. The actress used to date Ben Adams and then noticed her colleague Adam O’riordan when they were working on The Rotters’ Club.

In 2014, the celebrity married the financier Alex Cowper-Smith; the couple spent three years later and divorced in 2017.

According to Tatler, Alice Eve is one of the most popular British actresses.

2018 brought the movie The Con Is On by James Oakley. Eve had the chance to collaborate with Uma Thurman, Stephen Fry, Tim Roth, Maggie Q, and Sofía Vergara.

Fans can learn the latest news about the actress’s life on her personal Instagram: she shares many details before the media report them.