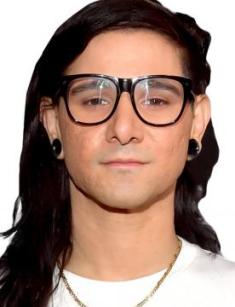 Skrillex is an American musician, dubstep artist, producer, and DJ, who holds the world record for most Grammys won by an Electronic Dance Music artist. Even rapper Kanye West who is chary of praise but famous for outrageous behavior has admitted that Skrillex’s remix of a Benny Benassi track “Cinema” is “one of the greatest creations of all time.”

There is an interesting fact in the biography of the owner of 8 Grammy Awards. At the age of 16, Skrillex learned that his parents, Francis and Scott Moore, were not his biological parents. Moreover, the people whose blood was flowing in his veins lived next door, and the boy even talked with them.

Sonny John (real name) was born in January 1988 in Los Angeles. Then the Moores moved to San Francisco. There Sonny went to school, but the relationship with classmates did not work out. A few friends called him Skrillex or Skrilly. The pseudonym does not mean anything or have a connotation. Unconfirmed reports state that his first stage name was Twipz.

After returning to his hometown, Moore studied at a private academy school specializing in arts, but his peers did not stop bullying him. He had to leave school and become home-schooled.

Music saved the young man. Sonny learned to play the guitar using the self-instruction manual, which he got as a birthday present, downloaded a computer program, and tried to mix. At the age of 12, he discovered Warp Records, an independent record label, and began listening to glitch and intelligent dance music.

The news that he is an adopted son made Moore leave home. At that time, he got acquainted with Matt Good, who played in the emo group From First To Last. It was supposed that Skrillex would join the band as a guitarist, but the young man became its vocalist.

In 2006, the band went on tour, during which Sonny suffered vocal problems, underwent two surgical procedures, and eventually left the group. He posted his first music on the Internet, performed in clubs until he signed with Big Beat, part of the Atlantic Records. Later, Skrillex began cooperating with DJ Deadmau5.

Skrillex released the first album in 2010. The same year, fans heard the song “Kill Everybody” from Scary Monsters and Nice Sprites; it later was remixed by the bands Bare Noize, KOAN Sound, and the French group Dirtyphonics. The leading track has had more than 100 million views.

In 2011, Skrillex’s laptop with songs for the next album was stolen. For the first time, he received five Grammy Award nominations, which was some compensation. Although Moore did not win the award, they talked and wrote about the musician everywhere.

A year later, Sonny released the single "Make It Bun Dem," recorded with Damian, the son of Bob Marley. The music video for the song “First of the Year” won the 2012 MTV Video Music Awards for Best Visual Effects.

In 2013, the dubstep musician won the Grammy Award for Best Dance/Electronica Album for his EP Bangarang. Skrillex was ahead of the famous English duo Disclosure, consisting of brothers Guy and Howard Lawrence, who presented their studio album Settle.

Skrillex released the only full album Recess in March 2014. For the following few years, the singer was busy releasing a debut album for the duet, Jack Ü, with Thomas Wesley Pentz Jr., better known as Diplo. The studio album was entitled Skrillex and Diplo Present Jack Ü. It also featured Justin Bieber and Melissa Elliot.

In 2016, Skrillex collaborated with the Swedish singer, Elliphant, for the single "Spoon Me." Shortly before, the video for their track “Only Getting Younger” had got over 6 million views on Youtube.

One year later, Sonny recorded the song "Would You Ever" and soon released the music video. The musician collaborated with Poo Bear (Jason Boyd), who is also a singer, producer, and songwriter. In 2017, hip-hop singer Sirah and Skrillex released a new single entitled "Deadbeat."

Moore produced and recorded with singer NSTASIA the track "Parachute." The woman said that their collaboration and the musician were awesome, and she was glad to include the song on her album.

Fans are interested in the personal life of the musician no less than the date of the next concert or release. It is known that Sonny had a relationship with English pop singer Ellie Goulding. The singer's credentials include the Critics' Choice Award at the Brit Awards in 2010, the first place on the Billboard charts and iTunes, the performance at Kate Middleton and Prince William's wedding.

Skrillex sent the woman an e-mail like, “I don’t know if you know who I am, but I love your shit.” The young people began to keep calling one another. Then Ellie arrived in New York City and found time to meet in person.

However, none of the singers wanted to move to the other side of the Atlantic Ocean, and the tours also affected their relationship. The love affair barely lasted one year. Nowadays, it is not clear whether Skrillex’s heart is now free or not. Journalists later saw Goulding together with actor Jeremy Irwin.

Sonny has a unique hairstyle. He has shaved hair on one side and has long hair on the other. Fans created the page on Twitter devoted to his haircut, and electric-pop band Electric Valentine dedicated the song “Girl, you got Skrillex hair” to it.

Moore communicates with Jared Leto and is a fan of Jonathan Davis; he even produced a few tracks for the tenth album of the band Korn. In turn, Leto appeared as the Joker in the music video for the song "Purple Lamborghini," which became the soundtrack to the adventure fantasy film Suicide Squad.

Sonny loves diet coke, coffee, and Mexican cuisine, in his spare time, he watches anime and enjoys imitating the voices of characters. He prefers the G-Star Raw and black clothes.

Sonny dispelled a myth long ago that it's impossible for a DJ to make a fortune. In 2018, Playboy Magazine published a list of the wealthiest DJs. Skrillex, who had a net worth of $24 million, was ranked at number 4. The talented young man was behind Tiësto, David Guetta, and Calvin Harris.

One year earlier Forbes magazine mentioned Moore in the top ten on the highest-paid DJs' list. His net worth was estimated at $30 million. Skrillex concerts, attended by thousands of people, use bright visual effects under the catchy slogan The King of Dubstep.

In April 2018, the New Zealand R&B singer Kimbra released her third studio album, Primal Heart. She recorded the track “Top of the World” together with Sonny. According to Rolling Stone magazine, the song is included in the playlist of FIFA 18, the popular FIFA game series, produced by EA Sports.

Nowadays, Skrillex has a net worth of $45 million.