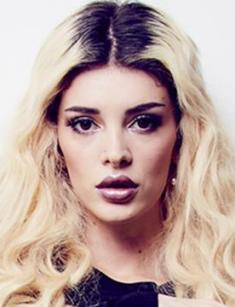 “If you merged Rihanna and Sia you'd get Era Istrefi,” YouTube users wrote under Era Istrefi’S video for the single “BonBon."

In 2016, this song made the Balkan singer well-known on the West. Her work had previously been popular only with the Albanian-speaking population of Eastern Europe. The singer moved to Los Angeles and is working on her debut album.

Istrefi participated in the recording of the FIFA World Cup song "Live It Up," alongside Nicky Jam and Will Smith.

The Albanian singer was born on July 4, 1994, in Pristina. The girl’s parents were associated with show business. Her mother Suzana Tahirsylaj sang and performed in the 1980s and 1990s; father Nezir Istrefi worked as a cameraman. Era has two elder sisters: Nora and Nita. Nora Istrefi later also became a singer, and Nita works as a stylist.

Istrefi spent her childhood and youth in Pristina. Having left her hometown, Era continued to admire the capital of Kosovo. The artist admitted in an interview with Wanderlust.co.uk that she felt free there. Her favorite place is the Tiffany restaurant with traditional cuisine. She is also inspired by nature, mountains, and waterfalls in the vicinity of Pristina.

In childhood, Era experienced a loss. When the girl was ten years old, her father died. Era's mother quit her career and found another job to provide for her daughters. Thus, Suzana encouraged Nora and Era's passion for music.

Istrefi released her first singles in 2013. The 19-year-old performer made her debut with the song "Mani Për Money." The Albanian-language song featured Gheg Albanian and English words. She also released the music video for the second single "A Po Don."

The company Entermedia produced the shooting of the black and white video of fair-haired Era wearing a grunge outfit and dancing in front of the camera. The same company later worked on the video for the song “BonBon," which became Era’s golden ticket to the international show business.

In 2014, the singer kept moving slowly but gradually toward the Albanian dance music industry but was involved in a scandal. Istrefi and arranger Mixey created an electronic hit song, based on Nexhmije Pagarusha’s single “E Dehun," but it featured electro dance music.

The video had a bombshell effect. Era wears a sexy outfit and is surrounded by ballet dancers who dance in a desecrated Orthodox church located on the territory of the University of Pristina.

They began to build the Church of Christ the Savior in the late 90s, but during the Kosovo war, the construction was stopped. Residents of Pristina, most of them are Muslims, were against the project. The Serbian Orthodox Church and the University of Pristina are now arguing over the territory where the church is located. The site remains abandoned, there are drawings and inscriptions on the brick walls of the temple, which is seen in the music video.

Nevertheless, the director of the music video, Astrit Ismaili, responded to the criticism of the church representatives and said that he did not want to insult the Serbs, and even had permission to shoot. The video received the Videofest Awards for Best Performance and Best Style.

At the end of the fruitful year, Istrefi released the single "13". The unusual genre of R&B ballads proves Era’s wide vocal range, revealing the similarity between Istrefi’s and Rihanna’s voices. Listeners have also compared the similar style of the music videos for the songs "13" and "Russian Roulette."

One year later, their similarity became even more evident when the Albanian singer recorded the hit song “BonBon.” Era admitted in an interview with MTV that she was flattered when both fans and music critics compared her with Rihanna or Sia. Istrefi said she always adored Rihanna.

The unpretentious video for the song “BonBon," shot in Kosovo, as well as the single, was released on the last day of 2015. It was a turning point in the singer’s life. After a month and a half, Istrefi signed a contract to release an album with the world's largest label, Sony Music Entertainment. In June, the artist presented the English version of “BonBon."

By this time, the video posted on the New Year’s Eve had got over 153 million views on YouTube. When Era left home in native Pristina, she had an autograph signing session.

“I couldn’t even go out to buy some food,” MTV quoted Istrefi, “because people wanted to take a photo with me.” You see, a lot of pictures!”.

In 2017, Istrefi moved to work in Los Angeles. She recorded the single "Redrum," featuring the former member of the pop group Terror Jr, Felix Snow. The same year, the song “No I Love Yous” was released. Neither the first nor the second single could repeat the success of the hit “BonBon."

It is not known whether Era Istrefi has a boyfriend. The young woman does not tell about her personal life, although she seems easygoing. Era has spoken several times in support of the LGBT community.

Era has over one million subscribers on Instagram. The girl posts selfies, photos of fans, pictures of the set while shooting music videos and recording songs, and images of concerts and official meetings. She also has a Twitter account which information often differs from her Instagram page.

The first half of 2018 was fruitful for the performer. She recorded four songs, including the single "Live It Up," the official song for the 2018 FIFA World Cup. The music video for this song was released in June. She has earlier recorded a duet with her sister. Nora Istrefi and Era recorded the song "As Ni Gote." As of July 2018, her latest single is "Prisoner." Now they are shooting a music video for it. There is no information about Istrefi’s tour and the release date of her debut album.

In 2016, Era received Albanian citizenship. World recognition allowed her to participate in official high-level national meetings. In June 2018, she and her sister Nora attended the meeting with Albanian President Ilir Meta. The head of state watched one of the World Cup matches, alongside cultural figures, scientists, and athletes. Ilir Meta posted the photos of the event on Instagram.

Era Istrefi has a net worth of $1.2 million.