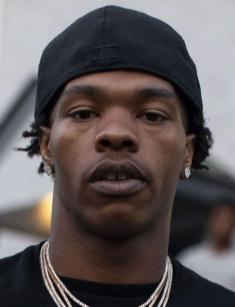 The black American guy from a southern state started just like many of his peers: the fatherless boy grew up in the street and began to do a petty robbery and sell drugs early. However, the gangsta rap that young Dominique heard there showed him a different way. Eventually, the love for music and talent gave Lil Baby the opportunity to leave the disadvantaged environment.

He became one of those few lucky people whose first steps were noticed and appreciated. The musician’s hits often appeared in the top ten of Billboard Hot 100; soon, Lil Baby turned into the rising star of the international hip-hop scene.

Dominique Jones was born in 1994 in Atlanta, Georgia. When the boy was two years old, the father left the family; the mother had to bring up her three children on her own. Lil Baby got his nickname at the age of ten: he was the smallest and youngest among his friends.

Dominique was not a diligent student and spent all his time in the street trying to get easy money. The school administration often tried to expel him for his behavior, and the drug-related troubles worsened the situation. The young man never received his secondary education.

In 2012, Jones was accused of drug possession with the intent to sell; he could have been sentenced for a long time. In 2013-2014, Lil Baby was caught possessing marihuana twice.

The man changed a couple of lawyers and refused to plead guilty; he was sentenced to five years. At that period, he had a conflict with a white inmate due to racial discrimination; further on, the case was reconsidered, and the sentence was reduced up to two years.

As long as Dominique was released, he joined his childhood friends who were taking their first steps in the musical business. The young talent turned over a new leaf in his life.

Similar to other people in his neighborhood, Dominique absorbed street music and loved hip-hop; however, he could hardly imagine that rap would become his profession. The first thoughts about a music career appeared in 2015 when Lil Baby’s childhood friends, Pierre “Pee” Thomas and Kevin “Coach K” Lee, instilled the interest in him. The trio founded their own label Quality Control; Jones began to create his debuting mixtape there. At the same time, the musician collaborated with the hip-hop companies 4PF and Wolfpack.

In April 2017, the musician had his debuting work released. Although Perfect Timing did not appear in music charts, it became a hit in Georgia and sounded in many pubs and bars in Atlanta. Jones confessed in one of his interviews that it took only two days to record the album. Simultaneously, the friends created the first official video “Freestyle”.

December 2017 marked the first success: the mixtape Too Hard got number 80 in Billboard. The next mixtape, Drip Harder, came out in October 2018 and became a breakthrough. It was number four in the main American music chart and number two in the Top R&B/Hip-Hop Albums category. Besides, Drip Harder succeeded in Canada, Australia, and Europe. By that moment, the rapper had presented he debuting studio album Harder Than Ever (released on May 18, 2018). It reached number three in Billboard 200.

The next year and a half, Lil Baby created six mixtapes. There were many hits including “Pure Cocaine” from Street Gossip (released in November 2018). However, collaboration singles were the brightest pieces of music: “Yes Indeed” with the Canadian rapper Drake and “Drip Too Hard” with the American musician Gunna. The lyrics showed the life as the black guy from city outskirts saw it: the dark romanticism of the world where euphoria was available at every corner, and sudden deaths were normal. It was love, struggle, and quick cash that could bring happiness or turn into a trap.

The prison experience is also a frequent theme in Lil Baby’s songs. He reflected on the life of a petty criminal and expressed his regrets about the past. The rapper sees his mission as follows: to demonstrate the hard path that black people from disadvantaged blocks have to follow.

Although the musician is an active user of social networks, he does not like to talk about his personal life. Dominique is not married; the story with children is more complicated.

The rapper often posts pictures with a boy, Jason, who might be his son. In September 2018, the artist congratulated him with his birthday and gave him a Rolex watch as a present.

In February 2019, Lil Baby’s girlfriend, Amour Jayda, gave birth to their child. “This baby is perfect”, wrote the rapper on his Instagram page.

Nowadays, Lil Baby is at the peak of his fame. He is likely to conquer more fans’ hearts by his songs.

The artist frequently gives concerts, records songs, plays in music videos, and communicates with his fans on social networks. He prefers sporty clothing and big cars; besides, jewelry is Lil Baby’s passion.

Fans are looking forward to their favorite’s new projects. In 2019, the musician will collaborate with Dj Khaled in Khaled’s new album.