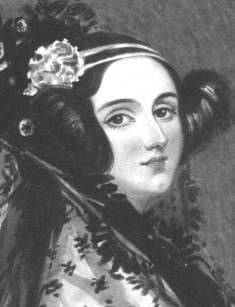 Ada Lovelace was an English mathematician and writer, chiefly known for her work on Charles Babbage's proposed mechanical general-purpose computer, the Analytical Engine.

Augusta Ada King, Countess of Lovelace (née Byron), was born on December 10, 1815, in London. Her father was the brilliant, yet notorious poet Lord George Gordon Byron and her mother was Anne Isabella Milbanke, a highly intelligent and particularly enthusiastic about mathematics and the sciences. The couple’s marriage was miserable, and the two separated just one month after their child, Augusta Ada, was born, so Lord Byron saw his daughter only once in her life. On 21 April 1816, Lord Byron signed the deed of separation, although very reluctantly, and left England for good a few days later. She remained the only legitimate child of the famous poet Lord Byron.

Although English law at the time granted full custody of children to the father in cases of separation, Lord Byron did not attempt to claim his parental rights but did request that his sister kept him informed of Ada's welfare.

There are various rumors about the role of Lady Byron in Ada’s life. On the one hand, mother and daughter had close relations, and on the other hand, future Countess Lovelace grew not knowing both her parents. Lady Byron had to present herself as a loving mother to the rest of society. This included writing anxious letters to Lady Milbanke about her daughter's welfare, with a cover note saying to retain the letters in case she had to use them to show maternal concern.

Lovelace was often ill, beginning in early childhood. At the age of eight, she experienced headaches that obscured her vision. In June 1829, she was paralyzed after a bout of measles. Despite the illnesses, she developed her mathematical and technological skills.

Ada Lovelace inherited mathematical abilities from her mother: Anne Isabella herself was gifted in math, for which Byron referred to her as the “Princess of Parallelograms.” Even at the age of twelve, this future “Lady Fairy,” as Charles Babbage affectionately called her, decided she wanted to fly. Ada Byron went about the project methodically, thoughtfully, with imagination and passion.

To construct wings, Ada investigated different material and sizes, examined the anatomy of birds to determine the right proportion between the wings and the body. Her final step was to integrate steam with the “art of flying.”

Her life changed forever on June 5, 1833, when aged 17 Ada Lovelace met Charles Babbage. Later that month Babbage, impressed by Lovelace's intellect and analytic skills, invited her to see the prototype for his difference engine. Ada became fascinated with the machine and tried to visit Babbage as often as she could. He even called her “The Enchantress of Number.”

During a nine-month period in 1842–1843, Lovelace translated the Italian mathematician Luigi Menabrea's article on Babbage's newest proposed machine, the Analytical Engine. With the article, she appended a set of notes. Explaining the Analytical Engine's function was a difficult task, as even many other scientists did not really grasp the concept and the British establishment was uninterested in it. Lovelace's notes even had to explain how the Analytical Engine differed from the original Difference Engine. Her work was well received at the time; the scientist Michael Faraday described himself as a supporter of her writing.

The notes are around three times longer than the article itself and include, in complete detail, a method for calculating a sequence of Bernoulli numbers with the Engine, which could have run correctly had Babbage's Analytical Engine been built. Based on this work, Lovelace is now widely considered the first computer programmer and her method is recognized as the world's first computer program.

In her notes, Lovelace emphasized the difference between the Analytical Engine and previous calculating machines, particularly its ability to be programmed to solve problems of any complexity. She realized the potential of the device extended far beyond mere number crunching. Section G also contains Lovelace's dismissal of artificial intelligence. She wrote: “The Analytical Engine has no pretensions whatever to originate anything. It can do whatever we know how to order it to perform. It can follow analysis, but it has no power of anticipating any analytical relations or truths.”

Throughout her life, Ada Lovelace was actively interested in scientific developments and fads of the day, including even those, which failed the test of time in the future – a phrenology (a pseudoscience involving the measurement of bumps on the skull to predict mental traits) and a mesmerism (a vitalist theory about biomagnetism).

In 1844, Lovelace commented to a friend Woronzow Greig about her desire to create a mathematical model for how the brain gives rise to thoughts and nerves to feelings (“a calculus of the nervous system”). She never achieved this, however. Perhaps, the reason for such interest in neurology was the theory of mother Anabella, who was scarred by the reckless behavior of Lord Byron that Ada might go insane, inheriting mental instability from his father, following in his footsteps. As part of her research into this project, she visited the electrical engineer Andrew Crosse in 1844 to learn how to carry out electrical experiments.

In the same year, she wrote a review of a paper by Baron Karl von Reichenbach, Researches on Magnetism, but this was not published and does not appear to have progressed past the first draft.

Though Lovelace is referred to as the first computer programmer, some biographers, computer scientists and historians of computing claim otherwise. The researches doubt that Countess Lovelace has the right to name herself as the first programmer. Some people thought that Babbage had prepared all programs, and Ada only promoted the Analytical Engine.

The others claimed that her work on the calculation of Bernoulli numbers is surprisingly accurate and subtle for its time and could not be compared with what Babbage wrote earlier. However, most researchers agreed that Ada Lovelace was the only person who fully appreciated the potential of the Analytical Engine and was able to foresee what changes such research would bring in human life.

An interesting fact: despite the controversy about the scientific achievements of Lovelace, she introduced the programming terms “working cell” and “cycle.”

In addition to her mind, Ada Lovelace had a bright appearance and feminine charm, thanks to which her personal life was discussed in society no less than scientific talents. Many lifetime portraits showed her undoubted attractiveness.

In early 1833, Ada Byron had an affair with a tutor. After being caught, she tried to elope with him, but the tutor's relatives recognized her and contacted her mother. Lady Byron and her friends covered the incident up to prevent a public scandal.

She was presented at Court at the age of seventeen “and became a popular belle of the season” in part because of her “brilliant mind.”

In 1843–44, Ada's mother assigned William Benjamin Carpenter, an English physician, an invertebrate zoologist, and physiologist, to teach Ada's children and to act as a “moral” instructor for Ada. He quickly fell for her and encouraged her to express any frustrated affections, claiming that his marriage meant he would never act in an “unbecoming” manner. When it became clear that Carpenter was trying to start an affair, Ada cut it off.

In the 1840s, Ada flirted with scandals: firstly, from a relaxed approach to extra-marital relationships with men, leading to rumors of affairs; and secondly, from her love of gambling. She apparently lost more than £3,000 on the horses during the later 1840s. The gambling led to her forming a syndicate with male friends, and an ambitious attempt in 1851 to create a mathematical model for successful large bets. This went disastrously wrong, leaving her thousands of pounds in debt to the syndicate, forcing her to admit it all to her husband.

She also had a shadowy relationship with Andrew Crosse's son John from 1844 onwards. John Crosse destroyed most of their correspondence after her death as part of a legal agreement. She bequeathed him the only heirlooms her father had personally left to her.

Ada Lovelace died at the age of 36 – the same age at which her father had died – on November 27, 1852, from uterine cancer probably exacerbated by bloodletting by her physicians. The illness lasted several months, in which time Annabella took command over whom Ada saw, and excluded all of her friends and confidants, in particular, John Crosse.

Under her mother's influence, Ada had a religious transformation and was coaxed into repenting of her previous conduct and making Annabella her executor. She lost contact with her husband after confessing something to him on 30 August which caused him to abandon her bedside. It is not known what she told him.

She was buried, at her request, next to her father at the Church of St. Mary Magdalene in Hucknall, Nottinghamshire, which was served as the traditional burial place of the Byron family who maintained a family vault there.