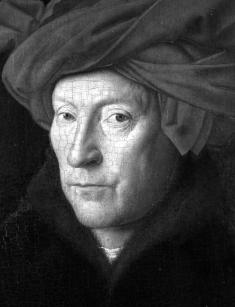 Jan van Eyck is a bright representative of Early Northern Renaissance art. The Flemish artist was one of the founders of Early Netherlandish painting, as well as one of the first painters to sign his canvases. His artworks distinguished themselves with the very exact architectural details and incredible accuracy, which made experts think that the artist used optics equipment.

The painter’s biography remains a mystery since researchers have not found any documents confirming many facts. They can only make assumptions and write hypotheses. For example, the exact date of Jan van Eyck’s birth is unknown. It is believed that he was born around 1380–1390, most likely in Maaseik or another provincial town, Limburg, (present-day Belgium).

The famous artist was raised with his brothers Hubert and Lambert, as well as with his sister Margareta. Hubert van Eyck’s name was embroiled in controversies. Some scientists believe that he taught Jan painting. The older brother handed over his skills to the younger one and participated in the creation of some works.

Researchers suggest that this cooperation could be successful. On the contrary, there is information that the brother had nothing to do with the work of van Eyck or did not exist at all. The fact is that books and other sources often do not match, so it is not easy to reconstruct a chain of events.

The early works of the artist have not survived, but there is evidence that he began his career in 1422. At that time, Jan van Eyck became a court painter of John III, Duke of Bavaria, in The Hague. The artist was young, compared to today, but his talent helped him achieve great results. The portrait painter had already taught students starting his own school.

Jan van Eyck’s artwork was a combination of the medieval art style with realism. Art critics note that the artist was influenced by the works of Tommaso da Modena and Robert Kampen. Experimentalist van Eyck surprised admirers with incredible accuracy, realistic depiction of materials and light.

Some art critics suggest that the artist began his career with miniatures. The work Turin-Milan Hours Burial Mass and Betrayal of Christ, dated back to 1415-1417, are attributed to Jan. One of the most famous works of the artist was the Ghent Altarpiece, located in St Bavo's Cathedral, Ghent, Belgium. The Polyptych consists of 12 interior panels. Some scientists believe that Jan created it with his brother Hubert.

The installation was officially celebrated in 1432. It depicted the Annunciation scene when the Archangel Gabriel came to the Virgin Mary. It also contains paintings of Saint John the Evangelist and John the Baptist. The center panel has as its centerpiece an altar on which The Adoration of the Lamb is depicted. Meticulous van Eyck created the landscape which was characterized by accurate depiction. Neighboring panels depict Adam and Eve, the angels and God the Father.

The painter paid particular attention to religious themes and often portrayed Madonna. The first work of this genre was Virgin and Child under a Canopy (1433). A year later, van Eyck created Virgin and Child with Canon van der Paele, and in 1436 he completed Madonna of Chancellor Rolin, which considered to be one of the most outstanding works of van Eyck. In 1439, he created the Madonna at the Fountain.

Jan van Eyck left a rich legacy, including many portraits emphasizing objectivity and the accuracy of the descriptions. His unique style has caused speculation that the artist used optical instruments to project and trace images accurately.

People can see the accuracy of the description in his artworks: Portrait of a Man in a Red Turban which researchers consider to be Jan van Eyck’s self-portrait, Portrait of Margaret van Eyck, Arnolfini Portrait. The last picture, depicting Giovanni di Nicolao Arnolfini and his wife, is as significant as the Ghent Altarpiece.

Jan van Eyck used unique techniques creating waist-high and 3/4 portraits, but not breast-deep ones, as was formerly the case. The artist focused on the ideas of individual identity.

There is an interesting fact that some researchers say that van Eyck invented oil painting. He was not a pioneer but contributed to the development of this arts. Probably, the portrait painter created new techniques, using tempera. Skeptics explain the artist’s illuminated images that way.

Thanks to the thoughtful composition, the works of van Eyck seem to be a single entity filled with symbolism and features of his unique style. The landscape and illumination helped to achieve new and unforeseen effects.

Jan van Eyck was married. There is little information about the wedding, as well as his origin. In the 1430s, the artist and his wife moved to Bruges, where he bought a house. In 1434 the first child was born in the family, whose godfather became Philip III, Duke of Burgundy. Scientists claim that van Eyck had ten children in this marriage.

Researchers believe that the painter created the picture of his wife. Jan made the painting shortly before his death and, apparently, was going to present it on her birthday. The image does not embrace an ideal woman. Margaret was not attractive, but her face is imbued with noble features and thoughtfulness.

It is curious that this portrait of the artist's wife was donated to the Artists Guild after his death. Up to the 18th century, the organization exhibited it on the Feast Day for St. Luke, a patron saint of artists. The painting was considered a masterpiece.

Jan van Eyck died on July 9, 1441, in Bruges, where he spent the rest of his life. The exact cause of the artist's death is unknown. He was buried in the graveyard of the Church of St Donatian near his house.

A year after his death, Jan's brother, Lambert, asked the Duke’s permission to rebury van Eyck's body and got permission. Besides, the patron put Jan's widow on a lifetime allowance.