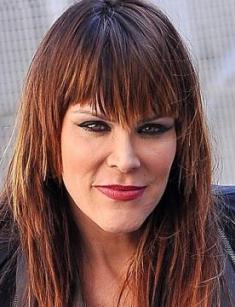 The charismatic beauty Beth Hart appeared on the musical Olympus in 1999, when the single "LA Song (Out of This Town)" became the No. 1 hit in New Zealand and entered the top ten songs in the United States. The jazz singer, who wrote songs for 10 Studio albums, fully revealed her talent in collaboration with guitarist Joe Bonamassa and became a nominee for the 2014 Grammy Award and a winner in several categories at the Blues Blast and Blues Music Awards.

Beth Hart was born in Los Angeles on January 24, 1972, and was such a musical child that at the age of four, her parents decided to organize piano lessons for her daughter from a private teacher. Starting with the classic works of Bach, Beethoven, and Rachmaninoff, the girl soon switched to modern compositions and picked up the timeless hits of Etta James, Otis Redding, and Led Zeppelin by ear.

Later, Beth recalled that her mother who liked to relax to the jazz music introduced her to the works of jazz musicians Dinah Washington and Billie Holiday. A love of aggressive rock appeared because of the father who left the family when the future singer was a teenager. Having survived the separation of parents and miraculously avoiding the harmful influence of the company, Beth graduated from high school and entered the Academy of Arts in Los Angeles for a course of vocal and cello.

While her sister began to use drugs, the future singer became addicted to creativity. First, she started from clubs with open microphones and talent shows, and then performances in Hollywood nightlife and concerts of world celebrities. As a result, Beth could not combine studies with nightlife and refused higher education, being expelled for systematic absenteeism.

This situation did not upset the aspiring singer, who in 1993 founded a band called Beth Hart and the Ocean of Souls and won the competition of vocalists "Star Search," received a prize of $100,000. With the money she earned, Beth bought an apartment and felt like a star. Unfortunately, she failed to confront the negative sides of a glamorous life, and the remnants of the fee went to alcohol and drugs.

Continuing to play in clubs, Hart's band dreamed of stadiums, and soon the consciousness distorted by drugs led musicians to Santa Monica streets where they acted in hope to be noticed by some known producers.

In the mid-1990s, the biography of Hart and her team changed dramatically thanks to the acquaintance with the showman David Wolff and composer David Foster. These people have become the producers of the singer and helped to sign a contract with the Studio of Atlantic Records to record the album, Immortal.

The record quickly gained popularity and opened the way for the band to the stage. Thanks to her, Beth Hart and the Ocean of Souls went on tour with the legendary Scorpions, but could not stand the busy schedule and a few months later broke up because of scandals and internal contradictions.

Beth had a hard time breaking up with partners and was depressed until the opportunity came up to release the single "LA Song (Out Of This Town)" and play the role of Janis Joplin in the Broadway musical Love, Janis.

From that moment the singer's career went up the hill. In 2003 Hart got on Koch Records Studio and recorded a solo album Leave the Light On, which became a breakthrough in the European music market. Having received a platinum certificate, Beth won recognition and became the first and only female performer to record a vocal part in the composition of the great Deep Purple "Haunted."

In 2005 Hart collaborated with the band Toots Thielemans and released CDs and DVDs with her own concerts. And two years later she presented to the world the Studio album 37 Days, which consisted of original songs and demonstrated a new round in the artist's work, free from depression and drug addiction.

Becoming famous and in demand, Beth began to appear regularly in the projects of famous musicians. In 2006, the singer toured with British virtuoso Jeff Beck, and in 2010 she recorded the iTunes version of Slash's solo album Mother Maria and the composition of Buddy Guy "What You Gonna do About Me."

In 2011, Hart, who had already released four albums, was invited to participate in the recording of the famous bluesman, Joe Bonamassa. Thanks to her equal contribution to "Don't Explain," Beth chose and performed covers of Etta James, Bonnie Bramlett, and Aretha Franklin's favorite songs.

The cooperation of the musicians continued in 2013 after Hart recorded the song "Caught Out in the Rain" included in the tracklisting of the album Bang Bang Boom Boom Boom. A new joint project was the album Seesaw, thanks to which Beth and Joe received a Grammy nomination and were recognized as one of the best contemporary Blues artists at the Blues Music Award ceremony.

After that, Bonamassa and Hart went on a mini-tour of Europe and gave two concerts at the Royal Carre Theater in Amsterdam. These performances became the basis for numerous videos featuring the duo and in 2014 were released in full on DVD and CD.

At the end of the tour, the singer began work on the 7th Studio album and on April 13, 2015, presented to the world Better Than Home, produced by dying of cancer Michael Stevens. Hart was anxious about her colleague and had to work quickly. As a result, the record was finished in five days, but despite this, the album hit the top in the European charts and topped the charts of Billboard and iTunes Blues.

Without stopping there, Beth collected material for the new album Fire on the Floor during the year. The album was released on October 14, 2016, in Europe and February 3, 2017, in the United States, and then in 2018 took part in the recording of the album Black Coffee, which became the third joint project of the singer with guitarist Joe Bonamassa.

A difficult childhood and unstable family environment have left their mark on the personal life and character of Beth. Since childhood, suffering from bipolar disorder, the girl aggravated the disease with drugs and alcohol. It is in this state that Hart met her future husband Scott Guetzkow, who worked as a road manager touring the team of the singer.

The young man immediately took a liking to the fragile girl with a vulnerable soul and, according to rumors, proposed to her in the drug clinic, where Beth took a rehabilitation course. Thus Scott saved the star from suicide and with the help of producer and friend David Wolff continued to keep Beth in stable remission.

After the wedding, the couple did not have children because of the busy schedule and shaky health of the singer. Now the couple lives in Los Angeles and occasionally share the events from their private lives with the fans, posting joint photos and videos on the official pages on Instagram.

Beth Hart has a net worth of $4 million. In January 2019, it became known that Beth was invited to the 40th Blues Music Awards ceremony. The singer was noted in three categories, among which the most valuable was the nomination of B B King, designed for an outstanding pop singer or performer.

While there was a vote, Hart performed at concert venues in Australia, and after the Awards ceremony, she planned to visit the cities of America and give a few individual performances in Europe.

Together with Joe Bonamassa