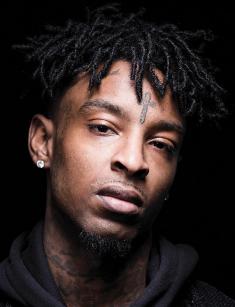 21 Savage is a catch in the music world: it took him several years to earn his international fame. The collaboration track “Rockstar” with Post Malone made the musician the leader of many charts. However, the young man who used to live in the outskirts has not forgotten some moments of his criminal youth: 21 Savage’s songs are mostly gloomy yet attractive.

Shéyaa Bin Abraham-Joseph was born on October 22, 1992, in Atlanta, Georgia. His mother, Heather, had Dominican roots and brought up eleven children alone. The would-be celebrity had four brothers and six sisters. One of the sisters died in a drug dealers’ shoot-out, and one of the brothers died during an attempted robbery.

The lack of parental attention and criminogenic atmosphere made Abraham-Joseph a troubled child. By the seventh grade, the teenager would not be accepted by any school in DeKalb County School District: headmasters believed that Shéyaa was dangerous for other kids as he always had a gun at hand.

Eventually, the mother had her son accepted in a school in the capital district of Atlanta. Shéyaa’s dark side flourished: he began to sell marihuana. At the age of 13, the boy got into a young offenders’ institution, yet the arrest did not convince him to mend his ways. As long as the teenager was released, he quitted school and began to distribute oft drugs. 21 Savage used to be a Bloods street gang member and participated in robberies and car theft. One day, he was arrested for illegal weapon transportation.

In 2011, Shéyaa’s best friend and “right hand” Larry died in a shooting with the police. Two years later, when the rapper turned 21, the band was attacked again; Abraham-Joseph was shot six times. One of the bullets injured the man’s neck and touched the nerve; he could have died of blood loss. Shéyaa’s five friends including his close friend Johnny were killed.

The chain of the tragedies made the American think about the meaning of his life. Music became his way to cope with the dark events.

The rapper’s stage name consists of the number 21 (the age when Shéyaa lost his close friends) and the word “savage” that came from nowhere: according to the musician, he wanted his nickname to look cool on Instagram. The uncle of one of his deceased friends supported the project financially: the money was enough to create the debuting studio record.

In November 2014, the track “Picky” produced by DJ Plugg was presented. Later, it became the head song in the mixtape The Slaughter Tape (2015). The music videos from that work (Skrtt Skrtt, Million Dollar Liq, and Whoa) showed the young man’s life before he entered the music world. As the rapper mentioned in his interview, he left alcohol, drugs, and midnight parties for music, and he had no regrets.

In July 2015, Shéyaa and Sonny Digital recorded the album Free Guwop devoted to the young musician’s inspirator, the rapper Gucci Mane. At the end of the year, the second solo mixtape, Slaughter King, came out. Soon, the famous American producers, Metro Boomin and Zaytoven, took an interest in the musician’s works; they continue to support him today.

2016 brought the title “Freshman Class” according to XXL magazine. In July, the rapper confirmed his high position and presented the album Savage Mode together with Metro Boomin that reached number 23 in Billboard 200; it was included in the top 40 rap albums according to Rolling Stone. The single “X” became platinum in the United States.

The next year, the debuting studio album, Issa Album, was released. It was included in the top 20 of Billboard Hot 100. The single “Bank Account” was particularly popular and reached number two in Billboard 200. The increased fame inspired the musician to give several concerts; the majority of them took place in Atlanta.

The 2017 track “Rockstar” with Post Malone is the most famous work of 21 Savage. It topped Billboard Hot 100 as well as Australian, Canadian, Portuguese, Irish, Danish, and New Zealand music charts. There are two versions of the music video. The original video contained the pictures of smoking marihuana, and the musicians believed that TV channels would not broadcast it. Thus, Post Malone and 21 Savage fight a samurai group in the official video.

2018 turned out to be the year of duets for the rapper. In April, Young Thug invited 21 Savage, Nicki Minaj, and Lil Uzi Vert to record the song “Hear No Evil”; in May, Shéyaa and SahBabii performed “Outstanding” together.

The same year, 21 Savage presented his second studio album I Am > I Was; Post Malone, Childish Gambino, Lil Baby, and other musicians contributed to it. Before the release, the music video “Immortal” came out; it became the soundtrack for the game Mortal Kombat 11.

In summer 2017, Shéyaa started dating the model Amber Rose; the woman publicly declared her love for the musician, posted happy pictures on Instagram, and confused the media with the rumors about their engagement. However, the truth was far from being perfect; in March 2018, the couple split up.

The rapper has three children; however, the mother’s name is unknown. 21 Savage also keeps secret whether he was married.

In 2018, the rapper founded the Guns Down, Paintballs Up organization aimed at reducing the number of gun-related crimes. Some people say there were several crimes against property and murders. The rapper did not make any comments. He paid for the funeral of a three-year-old child who was killed while the organization members were present, though.

Shéyaa is a great tattoo fan: there are pictures on his left arm and chest; the ink on his face is particularly notable. The number “21” on the man’s temple appeared first: it happened when his best friend Larry was alive. After he died, the musician added “RIP Larry”. Further on, the words “Death Before Dishonor” on the forehead and “Block Boy” on the right temple. There is a picture of a dagger between the artist’s eyebrows in memory of Johnny.

The rapper’s body is a memorial for his close people: Larry and his mother who also died in that gun-fight, two sister’s and brother’s name. However, the right arm is almost free of tattoos. Before Shéyaa got six bullets, he had the pictures of bullet holes on his forearm – this is where the real bullets got. Today, 21 Savage has nerve damage, and it is too painful for him to have tattoos on his right arm.

In 2019, he was nominated for Grammy Awards – Record of the Year and Best Rap/Sung Performance. Soon, Shéyaa is going to present the concert video, Issa Movie; he does not talk about other plans.