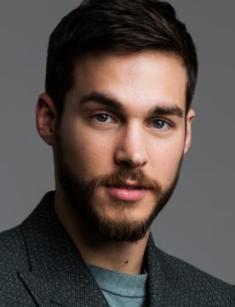 Chris Wood's name is known to every fan and especially fangirl of American teenage television series. He became famous after appearing on the screen in the character of Adam Weaver in the television project Carrie Diaries (2013). Chris got the taste of real fame in 2014 when he participated in the sixth season of the legendary Vampire Diaries.

Christopher Charles Wood was born on April 14, 1988. The boy spent his childhood in Dublin (Ohio). The Wood family moved from St. Louis; his mother worked as a financier, and his father was in the banking sector. Chris and his sister were often on their own. However, they were never bored: the boy composed simple plays, which he then staged at home with his sister and friends.

While Chris was still in two minds about his passion for musical theater, he had a second dream of becoming a surgeon. From when he was seven (it was at this age that he played in a production of children's theater), Chris had been participating in numerous musicals and plays, getting leading roles.

Of course, the question "What University should I choose?" was not there for long for the boy. In 2010, he graduated from the Elon University in Elon, North Carolina, becoming a bachelor of fine arts. Here, at the University, in 2008, the actor got his first award – the prize in the category Star Role in the production of Sweeney Todd: The Demon Barber of Fleet Street.

However, Chris devoted his creative life to the cinema and not to the theater. This kind of art also attracted him from childhood. At the age of 11, having received a camera as a gift, the boy began to write scripts and shoot short films. With one of them, Wood even participated in a local film festival, earning the praise of the jury: "Very well."

Since 2012, Wood began working on television. His first projects, where he played insignificant roles, were Girls (2012) and Major Crimes (2012).

2013 can be called a turning point in the creative biography of Wood: the television series Carrie's Diaries brought him fame, and the interesting young actor was invited to the hit project of all time The Vampire Diaries.

Chris Wood appeared in the sixth part of the project, playing another villain from the Parker clan-Kai.

In 2015, Wood got into the list of top ten TV actors according to the Variety magazine. Justifying such a high assessment, the actor soon made an appearance in another major television project Supergirl, playing Mon-El, the beloved of the main character.

New projects of American television channels brought Wood new roles. So, in 2016, the actor finally got one of the leading characters- as officer Jake Rally in the series Containment on The CW channel.

Fans watch the personal life of their idol very closely. Fortunately, the actor's Instagram, where he actively posts all the photos from his busy life, allows him to do it without any problems.

The first girl who broke the heart of this tall, blue-eyed brown-haired man (the height of the actor is 6 feet, and he weighs 174 pounds), was the actress Nina Dobrev, whom the actor met on the set of The Vampire Diaries. Their relationship became official in 2015 when the paparazzi caught the couple when they were kissing, and the whole world immediately saw the provocative photo.

Wood's heart was free at the moment, but Nina had recently broken up with her colleague Ian Somerhalder, so many people considered this new affair of the actress as a way to get back at her ex-boyfriend. Whether this was true is not known for sure, but the fact that the affair would last long became known very soon. Nina was into her new boyfriend.

And Chris, it seemed, was beginning to build personal life on the principle of "a new project – a new love." On another set (TV series Containment), he met actress of British-Australian origin, Hannah Lawrence. Before working with Chris, Hannah was already noted for filming in the series Spartacus: Vengeance - Season 2. The couple's relationship lasted about two years, but in 2017 the actors unexpectedly broke up.

The actor did not stay long alone. In the same year, it became known that he was in love with Melissa Benoist, the performer of the leading role in the series Supergirl. The actors fulfilled the dream of fans when they started dating: two superheroes love each other on-screen and meet in life. They are happy that the shooting of the series Supergirl is still going on, and the relationship of idols are full of tenderness and romance, which is confirmed by many photos in their Instagram.

Chris Wood's net worth is $2 million. To date, the actor's filmography includes more than ten works. Now, in his opinion, it's time to do what has warmed his soul since childhood, namely the creation of his own film projects.

In 2018, he finished directing the short film The Stew, the script for which he also wrote himself. And since perseverance is one of Wood's main features, no wonder his zodiac sign is Aries, there is every chance to hear about the success of Wood as a director.