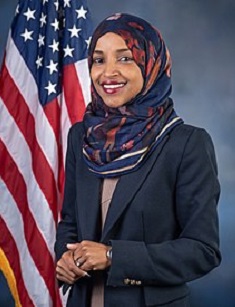 Ilhan Abdullahi Omar is a Somali-American politician working as the U.S. Representative for Minnesota district. In 2016 Omar became the first American citizen of Somali descent to be elected to Congress.

The future outstanding politician Ilhan Omar was born on October 4, 1981, in Mogadishu, the Federal Republic of Somalia. She was the youngest child of the family and had six elder siblings. Her father, Nur Omar Mohamed, Somali, was a trainer for teachers. Omar's mother, Fadhuma Abukar Haji Hussein, died when she was 2. After her mother's death, the father and grandfather took care of her. The name of Omar's grandfather is Abukar, and he was a head of Somalia's National Marine Transport. Her uncle and aunt worked as teachers and politicians.

Where the Somali Civil War started in 1991, she and her family left the country and passed four years in Dadaab refugee camp in Garissa County, Kenya near the Somali border. In 1995 the family got the permission to settle in the United States of America. Initially, they lived in Arlington, Virginia. Later they moved to Minneapolis. Once in the USA Ilhan spoke neither English nor Spanish. Then, having finished a 3-month course of English in Minneapolis, she started working as an interpreter at political gatherings for her grandfather. At first, her father worked as a taxi driver, later – as a post officer. Being a teenager, Ilhan heard a lot about democracy and its importance from him and her grandfather. Also, they took her with them to caucuses. In 2000, at the age of 19, Omar got U.S. Citizenship.

In her future admissions, Ilhan will say that she has been cruelly bullied at school for wearing a hijab. According to her, the classmates stuck gum on her clothes, pushed her downstairs and jumped her. Omar shares her father's reaction on it:

"They are doing something to you because they feel threatened in some way by your existence."

Omar studied at the Edison High School where she showed herself as a very active person: she volunteered there as a student organizer. In 2011 she graduated from North Dakota State University and got degrees in political science and international studies.

Omar was a Policy Fellow at the University of Minnesota's Humphrey School of Public Affairs.

Ilhan Omar started her political career working as a community nutrition educator at the University of Minnesota. She spent three years (2006-2009) at this post. In 2012 she worked as a campaign manager for Kari Dziedzic's reelection campaign for the Minnesota State Senate.

In 2012 the woman began working as a child nutrition outreach coordinator at the Minnesota Department of Education and quit in 2013.

Also, in 2013 she was a head of Andrew Johnson's campaign for Minneapolis City Council. When Johnson won the election, she started working as his Senior Policy Aide

In February 2014, during the political meeting which turned violent, she was attacked by five people and got some injuries. According to MinnPost's information, the day before this incident, Minneapolis city councilmember Abdi Warsame had told Johnson to advise Omar not to visit the event.

In 2015, Omar was the Director of Policy Initiatives of the Women Organizing Women Network. She advocated for women from East Africa to take political leadership roles.

In September 2018, Ilhan was called a "progressive rising star," by Jeff Cirillo of Roll Call.

In 2016 Omar became a member of Minnesota House of Representatives in District 60B. She participated in the elections and on 9 August defeated Mohamud Noor and incumbent Phyllis Kahn in the DFL primary. Ilhan's chief competitor was the nominee from the Republican Party Abdimalik Askar. At the end of August, he announced that he would withdraw from the campaign. In November 2016, Omar won the general election and became the first Somali-American legislator in the United States of America. She started working on 3 January 2017.

During her term, she became an author or a co-author of, at least, 266 bills.

In 2018 the Republican Representative Steve Drazkowski accused Omar of campaign finance violations. He said that she had used the money for paying a divorce lawyer and that her acceptance of paying for speaking at public colleges had violated Minnesota House rules. Omar replied that the layer she had paid for wasn't personal but connected with the campaign; also she proposed to return the money. Later the woman was again accused by Steve Drazkowski of inadequate using of campaign money. According to him, Omar used it while traveling to Estonia and locations in the United States.

Omar's campaign rejected all the accusations, having called them politically motivated. In response, they accused Drazkowski of using public funds to harass a Muslim candidate.

The Minneapolis Star Tribune published an article which said that Omar should be more transparent in terms of use of campaign fund. She responded: "these people are part of systems that have historically been disturbingly motivated to silence, discredit and dehumanize influencers who threaten the establishment."

On 5 June 2018, Omar applied for participating in the election to the U.S. House from Minnesota's 5th congressional district, when incumbent DFLer Keith Ellison announced he would not seek re-election. On June 2017, after two rounds of voting, she was approved. Omar won the primary election on 14 August, having captured 48,2% of votes.

Omar captured the largest percentage of the votes among women candidates for the U.S. Congress. Her swearing in was on a copy of the Quran owned by her grandfather

“Аs-salaam alaikum” - it was the way Omar greeted her electorate in her post-victory speech.

After her election, the woman was between two laws: the sharia law and the U.S. Constitution. Due to her, the ban on head covering in the U.S. House was modified, and she became the first woman to wear hijab on the House floor.

The main ideas she had were extremely progressive: the support of LGBT, control of weapons, free medicine, and others:

Although she was neither a member of nor endorsed by the Democratic Socialists of America, Ilhan Omar identifies as a democratic socialist.

Omar supports free medicine for everybody who needs help.

Since the woman herself has been an immigrant and she knows how it is, she supports the simplification of the Immigration and Customs Enforcement agency. She supports prosecuting federal officials who have been accused of physical and sexual assault of people in their detention. She supports the protection of sanctuary cities and a path to permanent status for DREAMers and their families. She opposes efforts to seal the border, calling Donald Trump's border wall plan "racist and sinful."She also criticized Barack Obama's "caging of kids" along the Mexican border. The woman doesn't support any antisemite behavior

Having seen the war in her motherland, Oman has criticized the foreign policy of the United States and supported funding reduce for "perpetual war and military aggression." She has the famous quote:

Omar stated, "I will fight for LGBTQIA+ rights in Washington D.C."

Ilham considers $15 to be the optimal hourly minimum wage.

In February 2019, the FBI arrested Coast Guard Lieutenant Christopher Hasson who was said to plan to kill some journalists and politicians, including Ilhan Omar.

The prosecutor said that Hasson is White Nationalist and a former skinhead. They also added that he saved weapons at home and compiled a hit list. The prosecutors claimed that the man was inspired by Norwegian far-right terrorist Anders Behring Breivik's 2011 domestic terrorist attacks

On 22 February 2019 the words "Assassinate Ilhan Omar" were written in a Rogers, Minnesota Holiday gas station restroom. It provoked the FBI Investigations.

On 9 March 2019, Fox News host Jeanine Pirro questioned Omar's loyalty to the United States because she wears a hijab. These her words were condemned as racist and Islamophobic

In 2014, Omar was named a rising star in the Democratic–Farmer–Labor Party's Women's Hall of Fame.

She received the 2015 Community Leadership Award from Mshale, an African immigrant media outlet based in Minneapolis. The prize is awarded annually on a readership basis.

In 2017, Time magazine named Omar among its "Firsts: Women who are changing the world", a special report on 46 women who broke barriers in their respective disciplines, and featured her on the cover of its September 18 issue Her family was named one of the "five families who are changing the world as we know it" by Vogue in their February 2018 issue featuring photographs by Annie Leibovitz.

The next year, Omar married her brother (as she confirmed on The Daily Show) Ahmed Nur Said Elmi. Later, in 2011, the marriage ended with a faith-based divorce. In the same year, she reconciled with Hirsi. In 2012 the woman gave birth to their third child. In 2018 the couple was legally married. Today Ilhan, her husband, and three children live in Minneapolis. Their daughter, Isra Hirsi as a school activist. She is one of the three principal organizers of the school strike for the climate.

Interestingly, that in 2018 the politician featured in Maroon 5 video of a new single released with Cardi B on the 31st of May. The song is called ''Girls Like You''.

At present, Ilhan's net worth is estimated at more than $50 million.