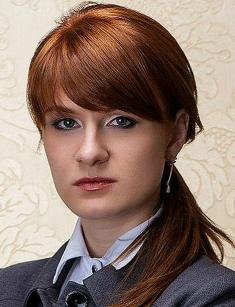 The Russian entrepreneur Maria Butina, despite her young age, managed to try her hand in several areas of business.

However, the world heard about Maria after her arrest in Washington, where she was accused of having links with Russian intelligence.

Maria was born in the fall of 1988 and spent her childhood in the city of Barnaul, Altai Krai. The girl's mother held a high position in one company, and her father was an entrepreneur. There is one more daughter in the family.

Thanks to the financial condition the family allowed to enroll the girl at a school with an in-depth study of the English language, which she graduated with distinction. In the youth, Butina actively engaged in sports, she was fond of pistol shooting, swimming and volleyball, played chess well.

The girl liked publicity since childhood, so she had chosen a future profession in the field of political science and pedagogy. Maria studied at the Altai State University, graduating with distinction.

At the age of 23, she became a graduate student of the same University, and her fluency in English, which she mastered at school, gave her opportunity to participate in meetings of foreign and Russian political figures as an interpreter.

It is known that Maria started making her career in 2002. It was when she took up the post of head of the school museum and at the same time gave lectures. Three years later, Butina quit and during the following two years was working with young people of the Altai office as a member of youth movement Pobeda from party A Just Russia. At the same time, Maria Butina coordinated work of public organization School Of Real Policy.

Within some time Butina engaged in political activities. She was an adviser to Civic Chamber member Andrey Stepurko, and soon Maria herself became a member of the Chamber and worked there until 2010. During these years, the road to journalism opened for her, which allowed Maria to publish materials in newspapers, as well as to make publications on the Internet, supporting the legalization of arms trafficking.

Butina was engaged in business with the support of her father. She built a furniture retail business in her native Altai Krai. It unknown how successful her business was, but soon she sold it and went to Moscow. And in 2012, a year later, she opened an advertising agency in the Russian capital.

Actively developing advertising and information business and at the same time being fond of politics, Butina got acquainted with Aleksandr Torshin. Previously, the man was in the position of Deputy Chairman of the Federation Council of the Federal Assembly of the Russian Federation, and later became deputy governor of the Central Bank of Russia.

In 2012, a report which was published by an American magazine made Maria famous. The article told about the shooting, organized by activists of the public organization Right to Bear Arms, described as a Russian gun-rights organization that lobbied to change Russia's strict gun control laws. Maria Butina founded the organization two years before the events described.

The woman plunged into her activities and even met with supporters of the legalization of arms trafficking in the Czech Republic and Slovakia. And in 2015 Maria went to the United States and already there tried to promote her opinion. Maria got acquainted with the American politicians who supported her views. She has lived in America since 2016. She did not have American citizenship, so she was in the country on a student visa. And two years later, Maria received a Master's degree in International Relations at American University. Meanwhile, on behalf of Russia, she was trying to establish relations with the National Rifle Association (NRA).

In early 2017, The National Prayer Breakfast was held, which provided for the presence of Donald Trump, the President of the United States. At the same time, a delegation from Russia formed by Torshin attended the event. Butina also became one of the delegates. However, after this event in The New York Times, there was information that Maria at least twice participated in the attempt of the organization of a secret meeting of Vladimir Putin and Donald Trump.

Because of the criticizing materials appeared in the American media, some US politicians insisted that an investigation against Butina would be conducted. She did not hide but hired a lawyer and testified in his presence to representatives of their parties. At the meeting, there were employees of special United States Senate Select Committee on Intelligence.

Two months after these events, Maria decided to go home because she had problems finding a job. She had already packed her things, but could not come back home. In April 2018, representatives of US Intelligence agencies searched her apartment in Washington and then arrested Maria. They explained it with the planned escape of the Russian spy from the country, or her finding shelter in the Embassy. On the same day, the news that a Russian woman suspected of espionage was arrested blew up the world media.

During the investigation, the American authorities managed to get access to personal correspondence and calls of Maria Butina. The accusations were based on the fact that the "spy" maintained communication with Russian intelligence officers, illegally established contacts with American politicians for the benefit of Russia, as well as penetrated the organization, which in the future would help it in the interests of the Russian Federation to influence the American economy.

According to the investigation, Maria fictitious studied at the American University, because she asked her man, with whom she was in a relationship, to do homework and write coursework instead of her. She allegedly needed it to cover up the primary purpose of being in America. And found by the FBI personal emails were addressed to the people who were thought in the US to be Russian intelligence officers. The lawyer denied all charges against his client.

From the personal life of the Russian woman, it is known that earlier she was married and has children, or rather, one child. Her husband was a member of the National Bolshevik Party (NBP) and was also a political activist. There is no more information about her ex-husband.

United States Department of Justice with reference to available documents claimed that the woman was in the relations with Paul Erickson. According to them, the Republican political scientist helped Maria to get contacts of politicians of America.

Before going to jail, Maria actively used social networks such as Twitter and Instagram. She regularly posted on Instagram photos from the filming of various programs with her participation, as well as images with her family. Although she did not cherish subscribers with hot pictures in a bikini, it is easy to notice her beauty and good figure. Butina used to spend a lot of time in the gym, loved to read and travel.

Maria is still in jail. However, on December 13, it became known that Butina agreed to take a plea deal. In court, she stated that she partially admitted to the charges. According to the woman, in America, she acted under the leadership of a Russian official, which, according to the US code, is charged as conspiracy and violation of laws on foreign agents.

In exchange for a partial pleading guilty, Butina can expect to serve a shorter sentence. The next court session was held on February 12, 2019, at which the date of sentencing was stated.

Having learned about this event, the Russians were not indifferent to the fate of the woman. Activists have created several funds calling for help, raising funds to finance legal protection and improve the conditions of detention of Maria in prison.

There is no definite information about Maria Butina's net worth, what means she keeps it in a secret.