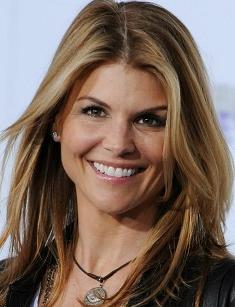 Lori Anne Loughlin is an American actress and model. She is mostly known for her roles in a television series Full House (1988–1995), The Edge of Night (1980–1983), When Calls the Heart (2014–2019), etc. Her husband is Mossimo Giannulli, a famous designer. They have three kids: Isabella Rose, Olivia Jade, and Gianni.

Lori was born in 1964 in Queens, New York, and a year after her birth her family moved to Long Island. Lori’s family has an Irish descent, and they are Catholic. Her parents are Lorellee Loughlin and Joseph Roy Loughlin. Lori’s father was a sergeant in the United States Army who fought in Korea, and after moving back to New York, he worked in the New York Telephone Company. Loughlin also has a younger brother, Roy, who was called after their dad.

In one of her interviews, Lori Anne says that she wanted to become an actress since she was five years old. Her family was always supportive, but, anyway, her father was rather strict.

“My father said that if he saw any of my school grades dropping or changes in my personality or attitudes toward people, he was going to pull me out of modeling,” – says Loughlin in one of her interviews.

Lori’s father has always been a considerable authority for her. She once told that she was choosing projects for herself very thoughtfully; she used to ask herself whether her dad would like it and watch it or not.

Loughlin went to the Oaks School №3 Elementary School in Oceanside, New York, and, then, she graduated from Hauppauge High School.

Her modeling career started when she was 11 years old. Her mother’s friend was going to meet with an agency for modeling and offered Lori to go with her. And that day, a young model got her first contract. That was her gateway into the entertainment business. She has been appearing in lots of commercials and then she got the way to her dream – becoming an actress.

Lori’s measurements are 36-25-36 inches (91.5-63.5-91.5 centimeters) which are recognized as perfect ones. At her age, Loughlin still has a body in an excellent form; she is slim; she has long beautiful feet; generally, she is admitted a hot woman.

By the way, Loughlin’s daughters are making some modeling career as well; in 2016, they made their debut in Teen Vogue. Isabella and Olivia certainly follow in their mother's famous footsteps not only in modeling but also in acting: they attend some acting classes, and they really love it!

Loughlin has a net worth of $8 million and together with her husband their collective net worth is around $90 million. Most of Lori's salary she received from her role in Full House and also she earns money from the advertisement companies and collaborations with some brands.

At the age of 15, Lori starred in the ABC soap opera The Edge of Night, playing the role of a dancer Jody Travis, appearing in the series from 1980 to 1983. From 1983 to 1988, Loughlin has been starring in some of the television series and feature films such as North Beach and Rawhide (1985), Brotherhood of Justice (1986) and so on.

Then, from 1988 to 1995, Loughlin was busy with one of her most famous roles –Rebecca Donaldson in the ABC sitcom Full House. When Full House ended, Loughlin co-starred with Tony Danza in another ABC sitcom Hudson Street (1995–1996), but the series was canceled after one season.

Loughlin is not only an actress but also a creator. In 2004–2005 she produced and starred in the drama series Summerland (Warner Bros. Television Network). Unfortunately, this work got rather low ratings, so after two seasons Summerland was canceled. From 2008 to 2011 Loughlin has been starring as Debbie Wilson in 90210, a spin-off of Beverly Hills, 90210.

In 2010, Lori starred in the television Hallmark movie Meet My Mom, which premiere was on Mother's Day. For Hallmark channel, Loughlin also starred in the drama When Calls the Heart (2014–2019) and the telefilm series Garage Sale Mystery (2013–2018) until her firing in 2019 after the bribery scandal. Speaking about When Calls the Heart, where Lori plays the role of Abigail, this drama has a lot of admirers who created their own fan club, and they call themselves "hearties." In one of the interviews, Loughlin claims that the support of her fans is the best and without them, any series simply cannot exist. Lori is very connected to her role, she loves this image of a strong woman, and she even wants to receive from Abigail such quality as patience.

In 2013 Lori together with John Stamos appeared on the TV show Late Night with Jimmy Fallon. John used to play Jesse Katsopolis in the Full House, and Loughlin as Rebecca Donaldson was his wife. In 2016, there was a premiere of the first seasons of the Full House sequel series Fuller House on Netflix. Lori has appeared here until Netflix fired her due to the famous scandal.

Loughlin has accounts on Twitter, Instagram, and Facebook; she thinks that nowadays connection with her fans through social media is really comfortable and significant. Unfortunately, due to the recent events, she had to delete her Instagram account. We hope that she will come back soon!

Lori has been married twice. Her first husband, Michael R. Burns, was a banker and they have been together from 1989 to 1996. In 1995 she met Mossimo Giannulli, a fashion designer, and in 1997 they got married. They have two kids together – Isabella Rose and Olivia Jade, and Lori is also a stepmother to Gianni, Mossimo’s son from the previous relationship. They have been moving a lot: in 2015 the pair sold their house in California for $14 million and residence in Beverly Hills for $18 million, then, in 2018 they put on sale another house in Bel Air for $40 million. Loughlin needs to travel for shooting, of course, but she always makes a deal with producers because she wants to have an opportunity to go back home often and see her family.

In March 2019, Lori and Mossimo were arrested due to connection with the college admissions bribery scandal. It is a massive scandal in the United States that has been going from 2011 to 2019. Parents paid a lot of money to the college admissions counselor who was able to arrange the fact of their children’s’ admission to the top universities. Fortunately, Loughlin and her husband were released on bail. After this scandal, of course, the family had some troubles with business: Lori was cut of the Fuller House by Netflix and also Hewlett Packard, a technological company, refused to continue the advertisement company with Loughlin and her daughter, Olivia. Besides Hewlett Packard, Sephora that recently created a nude palette together with Olivia and generally used to collaborate with her all the time stopped their work with a young influencer too.