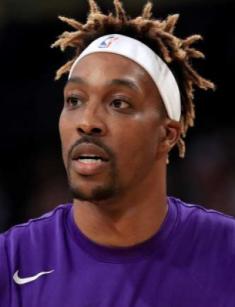 The Atlanta native, Dwight Howard started a basketball career in NBA in 2004, as a rookie of Orlando Magic, drafted by number one. Over the years Howard was playing for Magic, Lakers, Rockets, Hawks, Hornets, and Wizards. In July 2019 he joined the Grizzlies. Dwight is one of the most successful NBA centers and power forwards.

He was named to All-Star eight times; he became the best defensive player thrice, and several times won the individual statistical race in the number of block shots and rebounds. Also, he has five children. Howard’s net worth is roughly estimated at $140 million, including all of his properties and earnings. As of 2019, he is the 74th in the list of World's Highest-Paid Athletes.

Dwight’s birthplace is Atlanta. He was born to his parents on December 8, 1985. It was a real miracle for Sheryl to give birth to Dwight after she had miscarried seven kids. Dwight was lucky to appear in a sports family. His parents played basketball in their years, and Dwight knew who he wanted to be from an early age. The idol of his childhood was Chicago Bulls’ Michael Jordan.

Most of his childhood, Dwight spent in Swainsboro. Later the family moved to Atlanta. As a seventh-grade point guard, Howard assigned seven goals for his life. One of them was to become the 1st overall pick on the NBA Draft. Dwight entered local high school, where his father worked in 1998. He started as a skinny player. Nobody believed that the 5'10" height kid could become a good player.

But he grew up very fast. He sprouted seven inches in one year to hit 6'9" and started playing power forward. As a result, at the end of his junior year, a lot of college and pro scouts became interested in Howard. Dwight scored 20.0 points and 15.0 rebounds per game that season, and helped his high school team to reach the championship game.

On June 24, 2004, Howard became the top pick of Draft. He became the rookie of Orlando Magic. Two weeks later the sides signed a three-year $13.5 million contract. Howard immediately began to rewrite the NBA record book. He appeared in starting five in all 82 regular games, ended the season with 12.0 points and 10.0 rebounds on average.

He became the youngest player, who could average a double-double. Remembered the day when Howard was skinny, he wanted to have nice arms with big triceps, big biceps and wanted to make his chest real big. Following his aim, he started his second NBA season with gained 20 pounds of muscle. He was moved to center position and started to improve his game in post and defense.

In 2006-2007 season Dwight became the real icon of Orlando. He helped the club to get into playoffs, appearing in all regular games the third season in a row. The same year he received his first NBA All-Star selection and became the league’s leader in a total number of rebounds. As a result, Howard signed a five-year $83.2 million rookie-scale extension in summer.

Two years later, Howard had a chance to win a championship, but even his outstanding game didn’t help Magic to avoid defeat in the NBA Finals. The same year, Howard started to wear his famous arm sleeve. It became a trend among players, who usually wore it to keep the shooting arm warm during play or to relieve muscle tension and stop the sweat from dripping down to the hands.

Dwight wore an Adidas Techfit with Powerweb elbow sleeve, which he endorsed. Then Howard opened on why he wore it:

“Man I just wear the sleeve because I like how it looks. I started wearing it in practice it felt good one day, and I thought ‘Man, I should wear this in the game. It might make my shot look better.’ ”

Wanting to be a real championship contender, Howard decided to leave the Magic in 2011. However, he spent the 2011-2012 season with them, become the franchise all-time scoring leader, and set amount of various records. In April 2012, Dwight had surgery on his back. In August 2012, his trade to Lakers happened.

Howard spent one season in Lakers. Despite the fact, he played 76 games in a regular season, Howard didn’t show all of his opportunities as he was in recovery. Meanwhile, he could not find mutual understanding with Kobe Bryant, who liked to shoot very much. As a result, Howard showed the worst scoring performance in his career but was still good in rebounds. In the summer he became a free agent.

A four-year $87.5 million maximum contract of Howard and Houston became the real hope of Harden, Howard and whole the franchise for the championship. In his first season, Dwight showed his regular stats. It was not enough to achieve the second round of playoff. Next season was full of injuries and fines, and Howard made only 41 appearances. Without reaching his optimal conditions, Dwight left the club in summer 2016.

In summer 2016, Dwight Howard went on an endless journey through the NBA. He didn’t seem to stick anywhere, and his time as a useful player seemed to have evaporated thanks in large part to his troubles with injuries. He spent season 2016-2017 for Atlanta Hawks, season 2017-2018 for Charlotte Hornets. Being waived by the Nets in summer 2018, a veteran with countless accolades and plenty of playoff experience joined Washington Wizards.

Howard played just nine games for the Wizards in season 2018-2019 because of his back injury. The team traded him to the Memphis Grizzlies in July 2019 and didn’t seem too sad to see him go. Wizards’ general manager Tommy Sheppard said dealing Howard was the quickest trade he had ever done in his life.

Howard was owed $5.6 million that season and Memphis were expected to either waive or trade Howard once the deal was official. As of 2019, Dwight was still one of the best rebounders in the NBA. Throughout his 15-year NBA career, he had earned a very decorated resume and would more than likely be a Hall of Famer one day.

There were still teams who could use a center, whether it was a starter or bench player. Then good landing spots for Howard were Dallas Mavericks, Atlanta Hawks and Sacramento Kings. However, no locker room in the league could give him as warm a welcome as the Portland Trail Blazers.

Howard received his first selection to the USA national team in 2006, when he was named to the roster for World Championship. Then the team became only third. A year later, Howard became the winner of The FIBA AmeriCup. In 2008 Dwight became the Olympic champion along with LeBron James, Carmelo Anthony, Kobe Bryant, and others.

Dwight has a very rich dating history. A lot of his former girlfriends often report about having babies from him. According to rumors, Dwight has ten kids, but according to the player, he is the father of only five children, three sons, and two daughters. All of them have different mothers. Dwight has no wife as he has never been married in the past.

Dwight has always been very religious. Since his NBA appearance, Howard took part in a lot of charity activities. He even was awarded by his charitable work. In 2004 Howard founded The Dwight Howard Foundation Inc. It aimed to offer a mentoring program for boys who did not have a father or a male figure in their lives in an encouraging and nurturing environment. As an outlet for the young men, the basketball camp was launched which later included camp also for girls.

In 2017 Howard used his offseasons to promote numerous philanthropic works in Tanzania, making a life-changing impact on young women. He ensured girls had the basic sanitary products they needed, which had a domino effect on their education.