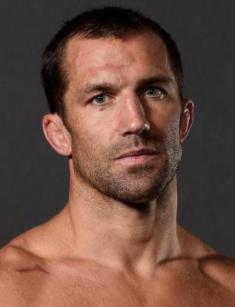 The admirers of the mixed martial arts, which have expanded in the United States of America in the 90th years of the 20 century, know well the name of Luke Rockhold, who twice kept the title of the champion of Strikeforce. However, few people know that the fighter, who became the last UFC middleweight gold belt holder, besides jiu-jitsu and kickboxing, enjoys other sports and appears in world high fashion weeks as a new face of Polo Ralph Lauren.

The American mixed martial artist Luke Skyler Rockhold was born on October 17, 1984, on the west coast of California, in the administrative center of Santa Cruz. Since childhood, the boy's biography was associated with sports, because his father, an Irishman, was a professional European basketball player, and his mother, masterfully owning the ball and racket, regularly took him to the tennis court.

Unlike his parents and brother, who was a surfer, Luke chose a tougher approach to shaping his own body. At the age of 6, he seriously engaged in judo. In the school section, he studied the techniques of wrestling and jiu-jitsu. As a result, he got a place in the university team of freestyle wrestlers.

However, after participating in a number of fights, Rockhold decided that he was closer to the art of kicking. That's why he left wrestling and continued training, aimed at suffocating techniques and painful grip with the help of his legs. On the advice of friends, the guy, whose height reached 6'3'' (191 cm) and his weight was on the verge of 200 lbs (82 kg), entered the American Kickboxing Academy and continued on his way to achievements and a matured champion's dream.

In the first professional fight held as part of a tournament called Melee on the Mountain, Rockhold completely dominated the opponent and then, after an impressive work with his legs, used a painful hold to win.

After the second fight, which ended with a technical knockout, Luke was offered to perform in mixed martial arts and participate in the fight of Young Guns II, organized by the American kickboxing association Strikeforce. The young fighter won thanks to a flurry of powerful kicks on the torso of an enemy who did not take any action, he won the sympathy of the bosses and managers and was invited to another fight.

These victories made the young American a character in the EA Sports MMA video game and gave him the hope of fighting more famous opponents. However, because of the shoulder injury at the training, the sportsman had to postpone the fight with wrestler and showman Matt Lindland and eliminate from the meeting with the winner of the Extreme Challenge Tim Kennedy, which was to be held at the tournament Strikeforce 32.

It was only after an 18-month recovery break that Luke was able to fight for the title. In September 2011, by a unanimous decision, he won the belt against the Brazilian Ronaldo Souza, who was the current king of the Strikeforce Ring. He did not give up the title in the fights Rockhold vs. Jardine and Rockhold vs. Kennedy.

Luke Rockhold in a suit When Strikeforce was closed, Rockhold was automatically transferred to UFC. His debut in the new organization was the highlight of the UFC on FX 8 evening. In a fight with the titled Vitor Belfort, Luke suffered an upsetting defeat with a knockout after being caught with a spinning heel kick to the face. In 2014, Rockhold fought against Costas Philippou at the UFC Fight Night 35.

After a convincing victory, the American received a $50,000 Knockout of the Night bonus. After that, Rockhold faced the British Michael Bisping in the main fight of the next UFC evening and won the prize for his outstanding performance with a series of kicks to the head and then a guillotine choke submission. A year later, Luke fought against another former mixed martial arts champion, heavyweight Lyoto Machida. The American was once again recognized as the best in the Performance of the Night category. He had the chance to face the current UFC belt holder.

Carefully prepared for the upcoming fight against Chris Weidman, who played successfully in different categories, Rockhold initially could not do anything to his opponent, but then managed to knock him to the ground and awarded him with powerful blows of hands and feet. The technical knockout victory for the challenger gave the American a middleweight UFC gold belt. But in June 2016, he lost it to Michael Bisping.

In 2018, defeated Luke had to settle for the title of temporary champion, but he lost with a knockout to Yoel Romero, a former Olympic silver medalist in freestyle wrestling.

Watching the development of Rockhold's sporting career, journalists paid little attention to his personal life. But in the mid-2010s, a photo of a fighter in the company of a long-haired beauty got to Instagram of the American edition of TMZ.

By this time, Luke had officially admitted that Demi Lovato, an actress, and singer, had been his girlfriend for several months. Nobody knew how serious this relationship was, but after Luke became a model and signed a contract with Polo Ralph Lauren Corporation, the couple broke up.

However, the former UFC middleweight champion was not alone for long and, according to rumors, in 2018, he started dating his shooting partner, Romee Strijd.

In early 2019, Rockhold said he planned to perform in heavyweight and fight with Jan Błachowicz, the multiple winner of UFC fights.

Now all fans of mixed martial arts are watching the video of the fight, which took place on the night of July 6-7 in Las Vegas, where from the first minutes Luke could not cope with the pressure of the Polish and lost the fight by knockout, recorded by the judges after 7.5 minutes.

Luke Rockhold has a net worth of $3 million.