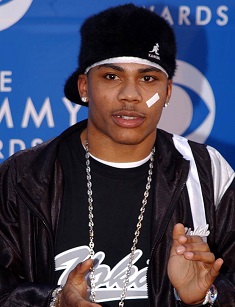 Nelly is a famous American rapper who has collaborated with lots of other musicians. His debut album was “Country Grammar” that got a really good position in the Billboard 200. Nelly is also an actor; he appeared in such films as Snipes (2001), The Longest Yard (2005) and television series like CSI: NY/Crime Scene Investigation (2008–2009).

Cornell was born in 1974 in Texas to Cornell Haynes and Rhonda Mack. He has two siblings: a brother, City Spud, and a sister Jackie Donahue, who died in 2005 because of leukemia. His parents got divorced when he was seven, and he has been living with his mother in St. Louis and then in University City, Missouri. Since childhood Cornell had two passions: basketball and rap. He once said that he had wanted to become a professional basketball player, but the music had taken over.

When Nelly was in high school, he formed a hip hop band named The St. Lunatics together with his friends Ali, Murphy Lee, Kyjuan and Slo'Down, and City Spud. Although the group was rather popular in St. Louis, its fame never went out of that neighborhood. So other members decided to let Nelly go and find his destiny solo.

After leaving The St. Lunatics, in 1999, Cornell signed his first contract with the Universal Music Group. The director, Kevin Law, told in one of the interviews that firstly, few people had liked Nelly, most of them had called his music “extraordinarily negative." That time, hip hop used to be the genre the East Coast, West Coast, and the South while Nelly was from the Midwest.

Started releasing his successful albums, Nelly has been doing it regularly. In 2002 and 2002 his debut “Country Grammar” and “Nellyville” were released. Two years later, albums “Sweat” and “Suit” appeared and took the first positions on the Billboard albums chart. That year, in 2004, Nelly performed on the Indian Ocean earthquake benefit concert. In 2005, appeared “Sweatsuit” which was a mix of tracks from “Sweat” and “Suit” with three new tracks. In 2008, Nelly released the fifth album “Brass Knuckles."

The release of his next album has been delayed because Nelly’s cousin was murdered. Then, in 2010, “5.0” appeared.

Since 2018, Nelly has had a contract signed with the label Columbia Records. In the interview with Big Boy, a radio host, the rap artist said that there may or may not be a new album. So, for now, all of Nelly's fans are just waiting for news.

By the way, Nelly’s brother, City Spud (Lavell Webb), is also involved in Nelly’s career. Lavell used to be a part of St. Lunatics together with Nelly, and he is still in this band. Lavell was a part of Nelly's debut album “Country Grammar," where one of the best singles is “Ride wit Me” featuring City Spud.

In 2000, Nelly’s first studio album, “Country Grammar," was released. This album took the third position in the Billboard 200, a record chart ranking the 200 most popular music albums and EPs in the U.S.

Nelly got some disapprobation for the misogynistic depictions of women in some of his singles such as “Tip Drill Remix” (2000) and “Pimp Juice” (2002).

The sixth Nelly’s album named “5.0” consisted of lots of collaborations. There were singles created together with T-Pain, Chris Brown, T.I., Kelly Rowland, DJ Khaled, Avery Storm, Diddy-Dirty Money, and that’s not the end of the list.

Nelly like a lot of other artists is fond of collaborations with musicians he likes. In 2011, he appeared in Pitbull’s “My Kinda Girl” single. Also that year, Nelly released his first solo mixtape “On Everything MO” where we can also hear T.I., 2 Chainz, St. Lunatics and more. In 2013, appeared the single “Get Like Me” created by Nelly, Nicki Minaj, and Pharrell, which was a part of Nelly’ next album, “M.O.” (2013).

In 2001, Cornell starred in his first film, Snipes, where he played a popular rapper Prolifik. In 2005, he made an appearance in a big movie this time called The Longest Yard; for this film Nelly’s songs “Errtime," “Fly Away” and “Here comes the boom” were used. In 2008–2009 he starred in the CBS crime drama CSI: NY, and, speaking about drama, he also appeared in 90210 in 2011. In 2014–2015 Cornell starred in his own television show named Nellyville which consisted of two seasons, and it was about his whole life: kids, acting and singing career and so on.

Nelly has a net worth of $60 million which he gets from his successful music career, acting, tours. Also, he has some other ventures. The artist is an owner of two clothing lines: “Apple Bottoms” for female and “Vokal” for men. In 2011, Cornell and Vatterott College worked together to open the Ex'treme Institute By Nelly, which is currently a music production school in the center of St. Louis. Nelly also makes some beats for the online-shop Malek Beats.

Besides, Cornell is no stranger to philanthropy. He runs the non-profit company 4Sho4Kids Foundation which was opened together with his sister Jackie who died in 2005 because of leukemia. This organization tries to give education about the need for bone marrow transplants to African Americans and other minorities and to register more donors. This company organizes events, auctions, and other useful assemblies.

In 2015, the Tennessee Highway Patrol stopped Nelly's tour bus due to lack of some needed stickers. One of the police officers smelled marijuana, so the patrol searched the whole bus and found some handguns, marijuana and something looks like methamphetamine. Nelly went to the Putnam County Jail, and he got free on bail. Eventually, the substance found in the bus was not methamphetamine, and Cornell was charged for possession of marijuana. After entering a diversion program, these convictions were removed from Nelly’s record after eleven months.

In two years, the rapper was arrested in Washington after a woman claimed that he had invited her on his bus and raped her. Cornell was booked into the Washington jail but got released without charge. In 2018, the artist was again accused of rape, but police could not get in touch with the supposed victim.

Nelly’s personal life is full of mysteries. The artist has two kids, Chanelle Hynes, and Cornel Haynes III, but it is unknown who the mother is. Also, he raises two other children, his niece and nephew, Sydney and Shawn. Nelly took them after their mother's death.

However, the list of his girlfriends is pretty long. The first girlfriend who we know about is Karrine Steffans, an American writer, who was with Nelly during 2000. From 2002 to 2003, he has been dating Eve Jihan, a rapper and actress. After that, there were a lot of rumors about Nelly and Kelly Rowland due to the release of their hit song “Dilemma” (2002). Anyway, both denied this suggestion, and Kelly said that Nelly was like a big brother for her and Destiny's Child, a band which consisted of Kelly, Michelle Williams, and Beyoncé.

The longest relationship that Cornell had was with Ashanti Shequoiya Douglas; they have been dating for around ten years. They met at the beginning of 2003 at the pre-Grammys press conference. The pair broke up in 2012, and this news was rather shocking; the reason for their split remains unknown. In one of her interviews, Ashanti says something mysterious about her being betrayed by Nelly and about his need to grow up and take some responsibility for his actions.

As we know, at present, Nelly is dating Shantel Jackson, an actress, and model. They have been dating since 2014. On Nelly’s Instagram, you can see a lot of lovely photos of them together.

Speaking about Nelly's estate, he has three houses in Missouri. They all are rather luxurious; there are big swimming pools surrounded by Nellies Stevens Holly trees and great basketball fields where Cornell likes to play with his friends.

Nelly has always been a popular name in the U. S., actually. For instance, other celebrities with this name are Nelly Korda, a professional golfer, Nellie Bly, a journalist.