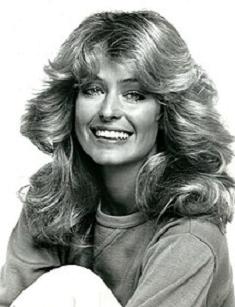 Farrah Fawcett was an American actress, model and artist. She gained popularity after starring in the first season of the television series Charlie's Angels (1976–1977). The actress was named the icon and sex symbol of the 1970s for her gleaming smile and famous hairstyle.

Ferrah Leni Fawcett was born in the coastal city of Corpus Christi, Texas. She later decided to change her name to Farrah. Her mother, Pauline, was a housewife. Her father, Jim Fawcett, was an oil field contractor. As a child, Farrah had a charming appearance. Her blonde curly hair and blue eyes could not leave anyone indifferent.

Farrah studied at John J. Pershing Middle School in Houston, Texas. In 1962, a girl continued her education at W.B. Ray High School. As a teenager, she was given the title of "Most Beautiful Student."

In 1965, Farrah began her studies at the University of Texas, where she intended to get a degree in microbiology, and also joined the Tri Delta sorority. The next year, she was offered to go to California to work as a model. At first, Farrah's parents were against her moving to California, but later they changed their minds and in 1968 they accompanied their daughter on her trip out west to Hollywood.

After arriving in Hollywood, Fawcett started to work as a model. She was very much in demand and received many offers to star in TV commercials and print advertisements.

In 1973, Farrah began starring in hit TV series, called The Six Million Dollar Man. In 1969, the actress made several guest appearance in the sitcom The Flying Nun. She also took part in a fantasy sitcom called I Dream of Jeannie.

On September 22, 1976, Fawcett played one of her best roles in the TV series Charlie's Angels. She played the part of the former policewoman Jill Monroe along with beautiful actresses Kate Jackson and Jaclyn Smith. The crime drama was highly appreciated by the audience. After the appearance in series, Farrah was called a phenomenon for her high popularity ratings.

Despite her high popularity, the actress didn't come back for the second season of Charlie's Angels. Since she signed a contract to star in the series, Fawcett agreed to make periodic guest appearances on the show over the next few years. Otherwise, she had to pay a huge sum of money for noncompliance with the contract.

Farrah Fawcett later played in several films, including Logan's Run (1976), Sunburn (1979) and Saturn 3 (1980). However, these roles did not bring her much success. She continued her career on television.

In 1981, Fawcett was well-received after her first dramatic television role in miniseries Murder in Texas where she starred as Joan Robinson Hill.

In 1984, Farrah produced and starred in the TV movie called The Burning Bed, which was a searing portrait of domestic violence. She perfectly performed the role of a woman driven to kill her husband after suffering for years under his physical abuse. For this performance Fawcett earned national recognition, as well as an Emmy nomination.

In 1986, the actress appeared in the stage and in a movie version of Extremities. Farrah was given the role of a rape victim, and she really got into this role, receiving positive reviews.

In 1989, Farrah played in another miniseries, called Small Sacrifices. She had the role of a mother who shot her children. She received a second Emmy nomination for the role.

In 1987, Farrah Fawcett was invited to star in Tonight Show. In the interview with Johnny Carson she was promoting her role in the film Somebody Killed Her Husband (1978). In 1997, she made another appearance on The Late Show with David Letterman.

Farrah garnered good reviews for her significant role in the film The Apostle starring Robert Duvall. She continued to star in TV series, including recurring roles in the sitcom Spin City (2001).

In 2000, she joined Richard Gere and Helen Hunt in the Robert Altman comedy Dr. T and the Women.

The actress continued to work in television and appeared in well-regarded TV movies and on popular television series that included comedy-drama series Ally McBeal, four episodes of Spin City, and four episodes of The Guardian. Her work on the latter show earned her a third Emmy nomination in 2004.

Lee Majors was Farrah's first husband. They married in the late 1960s and divorced in 1982, ending their nine-year marriage.

In 1979, the film star began dating actor and notorious womanizer Ryan O'Neal. In 1985, she gave birth to her only son, Redmond. The couple separated in 1977.

As a mother, Farrah put all of herself into raising her only son. Unfortunately, Redmond conquered drug problems. In 2015, he was sentenced to three years in jail for drug possession. He was in prison when she died, but he and his father kept it a secret from Farrah. In her death note that she wrote before death, the actress mentioned that she was proud to be Redmond's mother. At the end of the letter, the actress expressed the hope that he would solve all his problems.

Farrah started her next relationships with Hollywood director James Orr in 1977. In January 1998, Orr was arrested for physically attacking Fawcett after she turned down his marriage proposal. After that she reportedly rekindled a relationship with a former UT classmate named Gregg Lott, who was her last boyfriend.

Farrah was a very popular model. In 1976, Fawcett experienced another moment of glory when she was photographed for a poster dressed in a red bathing suit. For a short time, 12 million copies of the poster were sold out. The actress struck down everyone with her beauty and sexuality. After these photos spread all over the world, Farrah was mostly recognized for her hairstyle, which became an overwhelming trend among women all over the world.

The public was excited to see her posing semi-nude in the December 1995 issue of Playboy. At the age of 50, she appeared in a pictorial for the July 1997 issue of Playboy, that became a top seller.

In 1980, Ryan O'Neal organized a meeting between Farrah and artist Andy Warhol. During the talk the famous artist made two portraits of Farrah, which were later loaned to The Andy Warhol Museum.

Beyond her work as an actress, Farrah showed up as a producer. She also earned money from product endorsements.

At the time of her death, Farrah Fawcett had an estimated net worth of $20 million.

She had to go to Germany because only there she could get alternative treatments. According to the words of the relatives and friends, she met that perfectly well. She tried to look positive in her battle against cancer, although it was difficult to accept the diagnosis.

During her illness, the actress founded the Farrah Fawcett Foundation to aid fellow cancer patients and fund research for cutting-edge treatments. Farrah Fawcett died on June 25, 2009, at the age of 62.

Before she died, Fawcett offered her best friend, Alana Stewart, to film her cancer battle in a documentary film titled Farrah’s Story. She wanted everybody to see the reality she faced. Stewart later said that the actress didn't hesitate about filming the movie about her last days. Steward was shocked to hear Farrah saying in some moments ‘Why aren’t you filming this? This is what cancer is.’

In 2008, she was seen in her last movie Farrah's Fight for Life, where she again played herself. The documentary, directed by Craig Nevius, depicted her battle with cancer in Germany, where she was treated in a specialist clinic. Nevius revealed that Farrah was very optimistic about defeating the disease. The film was Farrah's last appearance on TV.

It occurred that the Fawcett's death coincided with the death of music icon Michael Jackson, which happened just a few hours later on the same day.