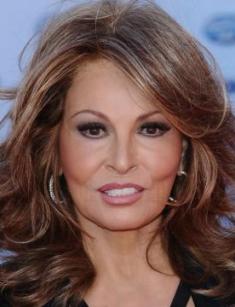 American actress and TV host Raquel Welch became the national sex symbol of the 60s and 70s. Her photo in a deerskin bikini, taken on the set of the film One Million Years B.C., and then shown in the famous movie The Shawshank Redemption, was a springboard for the brilliant modeling career and allowed her to appear in the films of leading directors for a long time.

The filmography of the actress has dozens of roles, including Constance Bonacieux in the film The Three Musketeers, which earned her the Golden Globe Award for Best Actress in 1974.

Jo Raquel Tejada, better known as Raquel Welch, was born on September 5, 1940, in Chicago. Her father, Armando Carlos, came from the Bolivian city of La Paz and worked as an aviation engineer. The man was a cousin of the country's president Lidia Gueiler Tejada. Her mother, Josephine Sarah, was the daughter of English architect Emery Stanford Hall and his wife, Clara Louise Adams.

The future actress spent her childhood in San Diego, California, where her parents moved in 1942. There, the girl attended a ballet school, and every Sunday she went to serve in the Pacific Beach Presbyterian Church. She studied ballet until the teacher told 17-year-old Raquel that her athletic figure was not good for dancing.

Then the girl with an attractive appearance decided to participate in beauty contests. During her school years, Welch won the titles of Miss La Jolla and Miss San Diego, and then she won the state title of Maid of California.

A sad event in the biography of the future actress was the divorce of her parents, which upset her, but did not prevent the young woman from graduating with honors in 1958. Raquel chose San Diego State College, where she first appeared on the stage in the play The Ramona Pageant based on the novel by writer Helen Hunt Jackson.

In her youth, Welch worked as a weather forecaster at KFMB, a waitress in one of the restaurants in Dallas, and a model for the famous American company, Neiman Marcus Group.

The actress began her film career in Los Angeles in 1963 with an acquaintance with Hollywood agent and producer Patrick Curtis. They developed a plan to turn the young woman into an American sex symbol, who first appeared on the screen in John Rich’s musical film Roustabout and Russell Rouse’s drama A House Is Not a Home.

After these roles, the aspiring actress was noticed and invited to the 20th Century Fox studio. There she took the first step to fame, appearing as a member of a medical team in the film adaptation of Isaac Asimov’s novel “Fantastic Voyage."

The next stage in Raquel’s acting career was her participation in the film One Million Years B.C. The role of the girl in a deerskin bikini brought the actress fame and made her a dream of thousands of men, including artist Salvador Dalí, who painted a portrait of the American beauty in 1965.

Overwhelming popularity provided Welch with an opportunity to work in Europe, where in 1966 she played with Marcello Mastroianni in the crime drama Shoot Loud... Louder... I Don't Understand and then became the only American in the cast of the French comedy The Oldest Profession.

The actress’s revealing dresses delighted the most sophisticated viewer, but Welch did not want to be completely naked. In 1969, in the western 100 Rifles, Raquel managed to disguise her body, while filming a love scene with partner Jim Brown, and she had a conflict with the director, who wanted to do the shower scene naked.

Although Welch loved the images of seductive beauties such as the heroines in the movies Lady in Cement, The Magic Christian and Flareup, she wanted to play interesting dramatic characters. It could have been the role of a transgender person in Michael Sarne’s comedy Myra Breckinridge, but viewers saw Raquel only as a charming and frivolous blonde.

Finally, in 1974, the actress saw a serious attitude of viewers and critics. Welch received truly rave reviews for the classic role of Constance Bonacieuxin the film The Three Musketeers, which earned her the prestigious Golden Globe Award.

This award was the only one in the celebrity’s credentials. Subsequent films, in which Welch's partners were Jean-Paul Belmondo, James Coco, Bill Cosby, and Oliver Reed, earned only audience applause and were mentioned in movie magazines.

In the 1980s, Raquel had a career crisis. When the producers of the film Cannery Row accused her of delays and lack of professionalism, the actress stopped filming and began to play on the Broadway stage.

For 20 years, Welch played in musical productions and sometimes appeared in films, and in the early 2000s, she returned to the big screen. Since the actress was not offered the leading roles, she starred in the movies Legally Blonde and Tortilla Soup several times, and then returned to TV series and launched her fitness program and cosmetics business.

It's no secret that the personal life of one of the sexiest women in Hollywood has had many men.

For the first time, Raquel married school sweetheart James Welch. The marriage broke up in 1964, but the actress took the husband’s surname and gave birth to two children: Damon and Tahnee.

For three years, the actress had short love affairs with her partners, and then Raquel became the wife of producer Patrick Curtis. This marriage lasted five years. When the relationship fell apart, it did not make the matured actress regret. The divorce forced Welch to immerse herself into work, and soon she met his third husband, journalist André Weinfeld. This time the marriage lasted longer than usual, and it even seemed that they would love forever.

However, it did not happen, and in 1999 Raquel had another boyfriend, a young businessman, Richard Palmer, who soon became her fourth husband. In 2008, this relationship collapsed, and the actress said she did not want to get married anymore.

Welch told some stories about life with a former agent and producer in the biographical book “Beyond the Cleavage."

The latest film with the participation of the Hollywood beauty of the 70s was released in April 2017. It was American director Ken Marino’s comedy film How to Be a Latin Lover.

After the premiere, the actress began to appear less frequently in public and now lives in Los Angeles, deriving income from books and her own cosmetics line.

In 2019, Raquel will celebrate her 78th birthday, but she does not look age. Although the actress does not go outside without professional makeup, fans want to believe that she has not undergone plastic surgery.

Raquel Welch has an estimated net worth of $30 million.