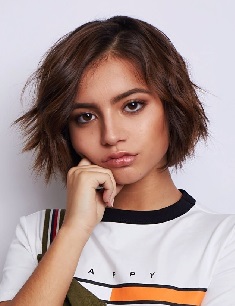 Even though she is only seventeen years old, Isabela Moner is already considered an established Hollywood star. The name of the aspiring actress is associated with her characters of Izabella in Transformers: The Last Knight, and Lizzie in Instant Family, as well as her work on the television show 100 Things To Do Before High School, broadcast on a channel for kids and teenagers, Nickelodeon.

On July 10, 2001, Isabela Moner was born in the biggest city of the American state of Ohio.

Her mother, Katherine Moner, a talent agent, is from Lima, Peru, and her dad, who runs a small business, comes from Louisiana. She grew up in a happy, loving family with her two brothers, Gyovanni and Jared Moner who always stood by their sister. In various interviews, Isabela mentioned that English was her second language, Spanish being her first. When she first went to school, she even had some difficulties because at that time she wasn’t able to speak English very well. When asked about her childhood, the actress said that the first thing that came to mind was that she was a hyperactive and very loud child at home and a shy and quiet pupil at school.

The child wished to have a creative career since she was tiny, and at the age of seven, she performed on stage for the first time. Even back then she already knew that acting was her dream job. The girl spent hours watching movies starring Shirley Temple and Judy Garland, who were her childhood and teenage icons. When she was fifteen, she enrolled at College.

Isabela Moner always wanted to star in movies and TV shows and made her Broadway debut when she was ten years old, playing in the musical Evita. The play starred Ricky Martin, with whom the girl sang in her native Spanish, and Michael Cerveris. The production was nominated for three Tommy Awards and is considered to be one of the most successful stagings of Evita.

The girl made her big screen debut at the age of twelve when she played little Nadia in the movie The House That Jack Built, directed by Henry Barrial. Even though the film was not high-grossing or very popular, it paved the way to Hollywood for Isabela. After it, she was offered a voice-over job in the sequel of Dora the Explorer, the famous educational cartoon television series, which came out under the title Dora and Friends: Into the City! In 2014, Moner received an invitation to participate in the filming of the American sitcom, Growing Up Fisher, which starred J. K. Simmons (as Mel Fisher) and Eli Baker (as Henry Fisher).

The television series was low-rated, and so the producers decided to cancel it after the first season. It didn’t take the young girl long to find a new job: after a couple of auditions, she got a part in the teenage project 100 Things To Do Before High School. In the series Moner (her character’s name is CJ Martin), Jaheem King Toombs and Owen Joyner play a trio of best friends who want to enjoy their last year in middle school and together come up with a list of 100 things they need to get done before they start attending high school. It was this teen show that brought the aspiring actress fame and recognition. The famous show was broadcast on Nickelodeon Channel from 2014 to 2016.

Almost one and a half millions of teenagers and their parents watched the show daily. While working on the teenage comedy TV show, Isabela participated in other Nickelodeon projects, such as their original movies Splitting Adam and Legends of the Hidden Temple, released in 2016, in which Moner played the central part of Sadie. In 2017, Isabela Moner played in the fifth film of the Transformers several movies, called Transformers:The Last Knight. Moner's character, Izabella, is a clever tomboy, who after losing her parents in the Battle of Chicago, lives on the streets and finds new, unusual closest ones.

In the same year, came out the animated movie The Nut Job 2: Nutty by Nature, in which the young actress was voice-acting Heather. In 2017, Isabela Moner received an offer from the producers of Sicario: Day of the Soldano to play Isabel Reyes. The movie was directed by the Italian filmmaker Stefano Sollima and was released in 2018.

The plot of Sicario’s sequel revolves around the drug war taking place at the border between the United States and Mexico. In the same year, Moner starred in the American comedy film Instant Family. During the shooting of this family comedy, the aspiring actress had an experience of working together with Mark Wahlberg and Rose Byrne. The motion picture made a resounding success at the box office, grossing almost $120 million.

Despite Isabela Moner’s young age, she is considered to be hot and sexy by not only fans, but also colleagues on set, and that led to exciting love life for the young girl. Many media sources try to catch Isabela Moner’s nude pics, and a lot of them seem to forget that Moner is only 17 years old. The fragile beauty (Isabela Moner’s height is 5 feet, and she weighs 103 pounds (47 kg)) has been a center of the media attention since her role of CJ Martin in 100 Things To Do Before High School. The journalists are interested in every part of Moner's life and look. Isabela Moner is even said to have one of the prettiest feet in Hollywood. The young girl seems to enjoy the attention of the public and regularly posts bikini photos of herself on her Instagram page.

Moner talks quite openly and sincerely about the current state of her love life. In 2015, on the set of Splitting Adam, Isabela Moner and Jace Norman met and almost instantly started dating. According to Moner, she gave him her phone number on the first day of shooting the film, and they texted each other the whole night through. Isabela opened her naked soul to the aspiring actor, and the teenagers fell in love. The fans enjoyed the couple’s joint photos on Instagram and funny videos on Snapchat that they filmed together.

Jace Norman and Isabela Moner had a public relationship, and maybe it triggered some of the problems they started to have in their love life. After seven months of dating, in November 2016, the couple announced that they had decided to break up but promised to stay friends. According to some media sources, Jace didn’t like the amount of attention around sexy Isabela Moner and turned out to be quite a jealous boyfriend. However, the couple did not make any official statements on the reasons for their breakup, so the rumors remain rumors. All the fans of the young people were extremely upset about the end of this Hollywood love.

In 2017, the fans were pleased to find out that Isabela had a new boyfriend. She started dating actor and model Dylan Summerall. Although the couple has several pictures together on social media, Isabela tries to keep this love affair more private than the previous one.

Besides working on movies and TV shows, Moner has a Youtube channel, on which she posts singing videos and make-up tutorials. Isabela even filmed and posted a video with her now ex-boyfriend, where Jason Norman did her make-up. The actress proves to have a very versatile creative personality.

The young Hollywood star has an estimated net worth of $1 million. Moner’s roles in Transformers and Instant Family brought the actress world-wide fame. In 2018, the creators of the live-action adaptation of Dora the Explorer announced that Isabela would play Dora in her teenage years. For the last year, the famous performer has been working on the set of Let it Snow, a romantic comedy film based on the young adult novel by Maureen Johnson, John Green, and Lauren Myracle. Luke Snellin is directing the movie, and the cast includes Kiernan Shipka, Shameik Moore, Odeya Rush, and others.

Recently, Moner has impressed her fans with a new haircut. Following the latest fashion trends, Isabela Moner decided to go for short hair, which suits the young actress perfectly.