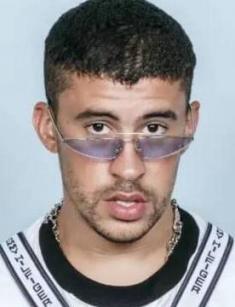 Bad Bunny is a rapper who earned his popularity thanks to social networks: the Puerto-Rican musician topped Latino-American music charts and then found recognition in the United States and Europe. Today, the artist is one of the brightest hip-hop figures, even though he has begun to perform not long ago. At the same time, the young man does not forget social networks and continues to add new content.

Benito Antonio Martinez Ocasio was born in San Juan, Puerto Rico, on March 10, 1994. His family is friendly and close-knit; the artist has two brothers.

The boy’s artistic abilities manifested themselves early; five-year-old Benito told his parents he would like to become a singer. Indeed, it was not a short-term hobby. After the young man graduated from school. He entered the University of Puerto Rico at Arecibo to study audiovisual communication. The would-be star also worked part-time as a supermarket bagger and recorded songs on his own.

The Internet epoch gave many young people the opportunity to develop, and the beginning artist took it. He posted the music video “Soy Peor” on YouTube and received many views within a short period; people began to talk about Bad Bunny.

Ocasio continued to do what he loved as an independent singer. He created music and shared it on various Internet sources. Soon, DJ Luian found the song “Diles” and took an interest in the young talent. He invited the rapper to collaborate with his own label Hear this Music, and a larger audience got familiar with Bad Bunny who worked with Latino-American singers and presented many hits.

In 2017, Cardenas Marketing Network offered the young man a contract in several Latino-American counties. The rapper became a showman for Trap Kingz. At this period, he released the song “Tu No Metes Cabra”. The artist’s tracks dealt with social themes; according to Bad Bunny, they reflected his thoughts and state of mind. The young man raps in English and Spanish, and many people can understand his lyrics.

Together with J Balvin and Prince Royce Bad, the musician recorded “Sensualidad” that was included in the Hot Latin Songs chart. In 2018, Bad Bunny appeared in Billboard Hot 100.

March 2018 was marked with the music video “I Like It” with Cardi B; it was one of the Billboard Hot 100 leaders that brought many new fans. The rapper performed at Tomorrowland festival in Belgium with this song. Soon, Drake and Bad Bunny presented the song and video “Mia”.

Today, Bad Bunny collaborates with many celebrities; he recorded “El Bano” with Enrique Iglesias and “Krippy Kush” with Rvssian and Farruko. Besides, he presented “Esta Rico” with Marc Anthony and Will Smith; it was performed at Latin Grammy Awards. In 2019, Benito still collaborates with Hear the Music.

The rapper lives in Los Angeles. His earnings increase thanks to his music and social networking. YouTube brings him pretty much money. The rapper is happy to have more than a billion of views on his channel: it means people love him. About six million users watch his works every month. Bad Bunny keeps the audience’s interest by regular concerts and participates in various TV programs as a guest.

The musician has a verified Instagram account and shares concert, working, and vacation pictures. Sometimes, he posts photos with his colleagues. The young man is not married and has no children, but he has a girlfriend whose name is not revealed.

Bad Bunny has a wonderful car collection; he is a passionate car lover.

The young man prefers baseball and sports style in clothes. He invents special effects for his shows to surprise the audience.

2019 has been marked with two albums, X 100pre and Oasis with J Balvin. Bad Bunny collaborates with Palms Casino in Las Vegas along with Alicia Keys, Skrillex, Armin Van Buuren, and other celebrities.

In March 2019, the rapper gave a concert in Miami; many music critics praised the musician’s devotion and the warm welcome from the audience. Latino-American fans adore the artist, and he gives them much pleasure and expresses his gratitude on social networks.