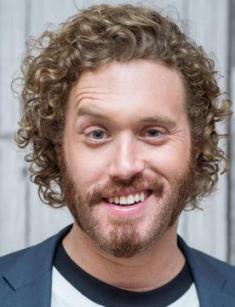 T.J. Miller was born on June 4, 1981, in Denver, Colorado. His mother Leslie Miller is a psychologist, and father Kent Miller is an attorney. Miller graduated from Denver's East High School, where he participated in theater productions. His teacher, Melody Duggan, recalls that Miller was a "typical class clown," but also says that he was much more sensitive than the average teenager.

"He understands the frailty of the human condition better than any kid I've ever had."

After graduation from high school, he entered George Washington University. There he was a member of the comedy group receSs for four years. Todd outperformed hundreds of his peers who attended the audition for the group. Later, Michael Tokaruk, a famous comedian and horseman, joined them. He also taught Miller to ride a horse. In 2003, Miller graduated with honors from the university, earning a bachelor's degree in psychology.

He studied acting at the British American Drama Academy in London and the circus arts at Frichess Theatre Urbain in Paris. The man learned to walk on stilts but did not master a single trapeze trick. He is an experienced clown and juggler, who can juggle five balls, perform fifty tricks using three balls, torches, and knives. He specializes in cigar box juggling tricks (for which he was accepted into a nightclub for magicians and magic enthusiasts of the Magic Castle in Hollywood).

After completing his studies, the comedian moved to Chicago and performed as a stand-up comedian with The Second City and other local comedy enterprises. They say that Miller worked in clubs every night without days off for four years. Since 2007 he has lived in Los Angeles and has appeared on television and in movies. In 2008, Todd was named one of Variety's 10 Comics To Watch. The clown quickly turned into an actor.

The talented comedian was in demand on television, and he also participated in educational shows for kids. By 2010, Miller had often been invited to play in movies. He got one of the nine leading roles in the melodrama She's Out of My League, a bit part in the musical comedy Get Him to the Greek and starred in two full-length films: Unstoppable and Gulliver's Travels.

He created the image of a clown for a long time, which was not in vain. Now T.J. Miller looks funny even wearing ordinary clothes. When he uses facial expressions and gestures, it is impossible not to smile. However, the actor can work without appearing on the screen. The artist voiced Tuffnut Thorston in the cartoon How to Train Your Dragon, Fred in Big Hero 6, and Gene in The Emoji Movie. In 2011, Todd released the album titled The Extended Play E.P.

Miller met his future wife, actress Kate Gorney while participating in the production of the musical A Chorus Line. Kate portrayed a ballerina, being a real ballet dancer, and Todd played the role of African American Richie. So, they started romantic relationships and later married. The couple got engaged in 2014; they celebrated the wedding at the Denver Botanic Garden on September 6, 2015.

The actor says that he is a hot-tempered and inconstant person. On December 9, 2016, Miller was arrested and jailed in Los Angeles for allegedly assaulting a taxi driver because of a debate he had with the man over Donald Trump. He was released after bail was set at $20,000.

At the end of 2017, Todd was involved in a scandal. An anonymous woman, who studied with Miller at the university, told reporters that in 2001, he became violent with her. According to the woman, one day the young man beat her, and next time he raped her with a beer bottle. The actor denies the charges, considering them to be the revenge of a former girlfriend who wanted to take advantage of the situation in Hollywood after Harvey Weinstein scandal.

In 2017, the actor starred in the film Deadpool 2, which was scheduled to be released in May 2018. Miller plays again the role of Jack Hammer (Weasel), Wilson's (Deadpool) best friend, and at the same time, the owner of a bar where mercenaries often gather.

At the same time, he portrayed an annoying online gamer, i-R0k, in the science fiction film Ready Player One. Steven Spielberg's film adaptation of the novel of the same name by Ernest Cline was initially scheduled to premiere in December 2017 but was pushed back to March 2018.

But the fifth season of Silicon Valley will not feature Miller's character who has won the hearts of many viewers. The actor left the project because the role of Erlich Bachman has been dramatically reduced. However, Miller and HBO management are satisfied with their collaboration and have no complaints.