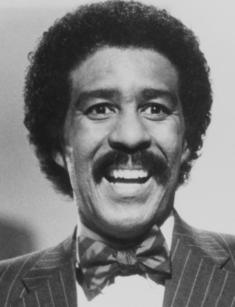 He was a talented actor and comedian with a prolific career on the screen. The first part of his life was rather difficult, his mother was a prostitute, and the violent grandmother raised the boy. Nevertheless, that fact had not stopped him from making one of the most successful stand-up careers.

Richard's childhood was far from comfort. His grandmother was a violent woman who beat him for every eccentricity. He was grown up by his grandmother as his mother was a prostitute and suffered from alcohol addiction. His father was a former boxer. As a boy, he was sexually abused, at the age of 14 Richard expelled from school. During his service in the army, Richard and several other black men who were angered by racial inequality, beaten a white man, not fatally. Because of that accident, Richard spent in prison most time of his service.

In the 1960s, the young Richard moved to New York, where he began performing in local clubs alongside Woody Allen. He drew inspiration from the comedy of Bill Cosby and became a middlebrow comic. His humor wasn't controversial and easily accessible.

Soon he regularly performed at the TV variety shows. By 1967 the comedian had a sold-out crowd. In the 1970s, he wrote for majority TV shows. He played alongside Gene Wilder in the duo. The comedians had a long and complicated friendship.

That time he tried his hands in acting. He appeared on several popular movies, among them "The Mack" and "The Muppet Movie." He also released several albums at that time. In the 1980s, he remained a demanded stand-up comedian with a loyal fan base. His castmates were famous actors and comedians such as Eddie Murphy. Besides, he made one of the most renowned sketches with Chevy Chase.

He consistently featured on the screen. Thus he briefly hosted children show "Pryor's place'" and made a notable appearance on the TV show "Chicago Hope."

On the sets, he proved to be very demanded and disrespectful. He made selfish and difficult respects. He was often late and once requested a helicopter.

Due to multiple sclerosis in his last years, Richard spent in a mobility scooter. He appeared in the minor role of Lynch's movie "Lost Highway."

His skills of comedian and actor were highly recognized. Richard was named one of the best comedians of the century, who could "drew a very thick line between tragedy and comedy" and bring the unusual degree of intimacy in his comedy. For his career, he received many accolades. In 2001 he was placed in the first place in the list of 100 Greatest Stand-up comedians.

Besides his acting career, he was very active in animal rights. That's why PETA made an award in his name. To honor the actor, a lot of directors and stand-up comedians gave several interviews and produced many documentary movies.

The actor acknowledged his bisexuality among friends and relatives. In 2018 his closest people confirmed Richard's sexual relationship with Marlon Brando. He also had a two-week relationship with a transvestite. His daughter denied those rumors.

The actor suffered from cocaine and alcohol addiction. The actor’s drinking became the reason for an accident. Once, he was arrested and prisoned for five months as the result of drunk driving. Besides, in 1980, he poured rum all over himself and lit himself on fire. He shared that story at one of his performances.

Due to smoking and drinking, the actor repeatedly had health problems. Thus, at the age of 37, he suffered the first heart attack. Besides, he was diagnosed with multiple sclerosis.

As to kids, the comedian had seven children from different women. Moreover, he was married seven times and had five wives. In 1960 he married his first time, Patricia, they divorced a year later. Then he married again and spent two years with Shelley. In 1977 he married a model and actress, Deborah McGuire. One year later, they split. Then he tied the knots with the actress and designer Jennifer Lee in 1981. She left him due to his drug addiction in 1982. In 2001 they married again. Jennifer stayed with him until his death. In 1981 he also married an actress Flynn Blaine but filled the divorce a year later. They remarried in 1987 but four years later separated.

The actor’s son followed his father’s steps and performed at the stage as a comedian. But he wasn’t so organic and didn’t feel the public. There is a video of Internet where he was booed off the stage.

His net worth was estimated at $40 million.

He died in December, 2005 due to the third heart attack. His wife tried to resuscitate him. However, the actor was taken to a hospital where he died. The pathologist stated the cause of his death was coronary artery disease, which was provoked by many years of tobacco smoking.